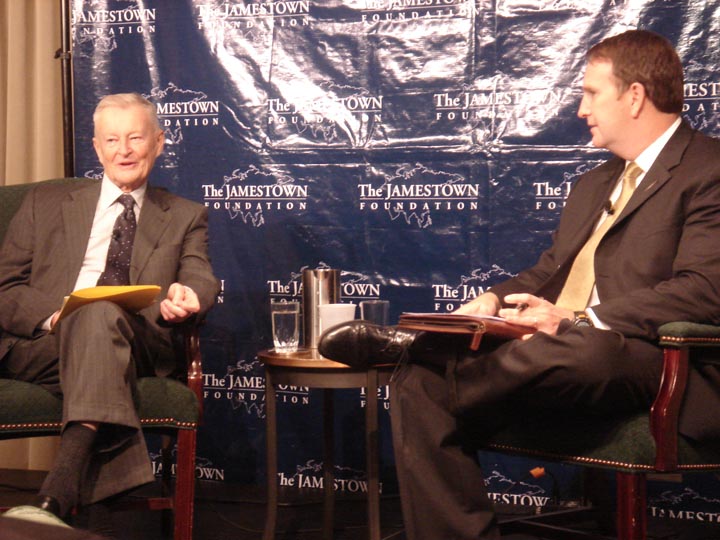 Washington D.C.- The Jamestown Foundation and the Central Asia Caucasus Institute hosted an event at the Carnegie Endowment for International Peace entitled, US-Azerbaijan Relations: State of the ‘Strategic Partnership’ featuring Ambassador Richard Morningstar, special envoy for Eurasian energy and Dr. Zbigniew Brzezinski from the Center for Strategic and International Studies. The core issues at hand were the future of both Caspian and trans-Caspian oil and gas projects, the competition between the Nabucco and South Stream pipeline project proposals competing to bring Eurasian energy to European Union markets, as well as the inability to confirm the appointment of America’s ambassador to Azerbaijan in waiting Matthew Bryza who’s posting is currently being blocked by a hardline ethnic lobbyist group calling itself the Armenian National Committee of America (ANCA). Longtime Jamestown analyst Vladimir Socor said that ANCA was linked to the radical Dashnaks.  As with any Washington event, there were those in attendance espousing their own ethno-centric political positions, in this case hard line Armenians as well as a few Israel lobbyists stirring the Iran pot for good measure insofar as Iran is Azerbaijan’s southern neighbor. An AIPAC lobbyist, perhaps the city’s most dreaded, brought up the point about an Iranian state oil concern, the National Iranian Oil Company and it’s Swiss-based subsidiary Naftiran, having a 10% stake in the Shah Deniz 1 field 70 kms off the Azerbaijani coast (along with BP, Lukoil, and Statoil) in relation to U.S. backed, Israeli supported, sanctions against the Islamic Republic.

Of course, AIPAC, WINEP, and the others have it completely backward. Engaging Iranian bazaaris and oil technocrats despite Ahmadinejad is the obvious way forward to foment positive engagement with Iran that would likely dilute its rhetoric on the international stage. The Iran of today is not some analogy of the Soviet Union under the Jackson-Vanik act. Brzezinski told the audience of Israel’s objectives: “They are more dependent on our fate than we are on theirs.” On the Karabagh, Lachin corridor and seven adjoining districts of Azeri territory occupied by ethnic-Armenian forces (Armenian army regulars and the so-called Nagorno-Karabagh Republic Defense Army) and their supposed “strategic value” (to the Armenian diaspora I guess), Dr. Brzezinski stated that in global affairs as a whole, the idea of a disputed territory’s strategic value is applied very unevenly dependent upon the differing perspectives of the opposing belligerents. One country’s essential disputed or occupied territory may have little intrinsic value for the rest of the international community. His comments to me evoked the Indian establishments constant talk of Kashmir being strategically essential to India’s survival. Azerbaijan, despite having elections, is essentially a one-party state described as employing soft authoritarianism. It is also a pivotally important, if fractured, Eurasian state that is the scene of classic great power competition in the 21st century. Elkhan Nuriyev, basically representing President Ilham Aliyev, alluded to this by saying that Baku skillfully balances its relations between D.C., Tehran, Moscow and Brussels. The U.S. is desperately interested in getting the Nabucco pipeline project off the ground to counter Russian maneuverings in the region. The U.S. seeks to isolate both Russia and Iran in this sense and discourage the European Union market from being dependent on these two massive suppliers of natural gas and link Europe, specifically Austria, to the existing BTE (Baku-Tbilisi-Erzurum) gas pipeline with the possibility of later hooking up an Iraqi (actually Kurdish) pipeline (if Erbil and Baghdad can ever come to an agreement on Kurdistan’s potential gas exports). Azerbaijan, sitting on the edge of the woefully polluted Caspian Sea (not to mention playing a sizable role in NATO’s NDN) is the total pivot state in today’s Eurasian realm. Geography is destiny as they used to say.