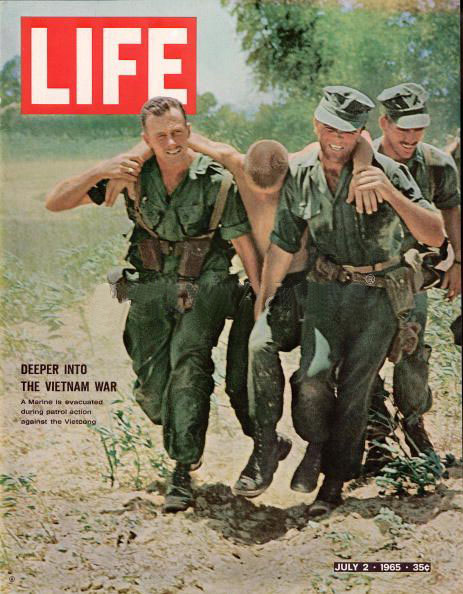 New York- Richard Welsh, my first cousin, once removed, died in Philadelphia yesterday. He was 69 years-old. Dick, as he much preferred to be called, was in the first wave of United States Marines who tramped into Da Nang in the earliest stages of American military involvement in Viet Nam and the Indochinese theatre. He’s pictured above in 1965 carrying a comrade who’d collapsed from heat exhaustion in a Life cover shot taken by legendary photojournalist Bill Eppridge (Eppridge photographed Robert Kennedy’s assassination in the kitchen of the Ambassador Hotel on Wilshire Boulevard in Los Angeles). The last time I saw Dick was at my sister’s wedding in July of 2003. I had come back from photographing and hitchhiking around the Republic of Iraq in the spring and Dick said to me somberly on that glorious summer day sipping a gin and tonic: “I don’t know why you would [voluntarily] go to a war Derek. War is hell.” He then quickly changed the subject and pointed to some young female wedding attendees with tacky early millennium tattoos and said: “You’ve got a real arts and crafts crowd here” hilariously referring to the neo-hippies in our midst.  Richard Welsh was a one of a kind. He was, at least to me, a rare example of a Viet Nam veteran who not only returned intact but returned to post-war civilian life and flourished doing so contrary to the stereotype of the “‘Nam” Hollywood movies of the early 19080s which portrayed returning veterans as deranged loners bent on some form of revenge.  While the American effort to prop up the South Vietnamese government and stem the tide of communism in Southeast Asia ended in abject failure, Dick was a striking success in his life and in the world who moved on without looking back. Dick was both a man’s man and a gentleman of the sort that doesn’t seem to exist these days. I’ll miss you friend.

← Degrees of Separation From Assange
On New Year’s Day →