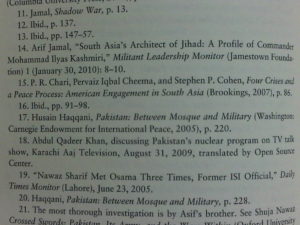 Proud to see this!

New York- I was pleased to see my publication Militant Leadership Monitor, referenced in the endnotes of Bruce Riedel’s new Brookings book Deadly Embrace: Pakistan, America, and the Future of Global Jihad. This is the first citation of MLM in a mainstream book that I know of, not bad after less than a year and a half after starting from virtual scratch.

In other news, Clare Gillis, James Foley, and Manuel Varela were finally freed from Tripoli today and sent across the border to Djerba. As I figured by this point, Austrian-Afrikaaner Anton Hammerl was not released with them and is assumed long dead. I figured as much when reports said that Clare had been able to make outgoing calls and nothing of Hammerl was mentioned. A Briton, whom I didn’t even know was captive called Nigel Chandler was also let go. Disturbingly, a guy from Georgetown named Matthew Van Dyke vanished without a trace from around Brega in mid-March and his case has received almost no publicity. God help him. Libya is a roll of the dice. There is only one consistency when you break open a tightly sealed police state and that it that you never know what the hell will happen. Look at Iraq for god’s sakes.