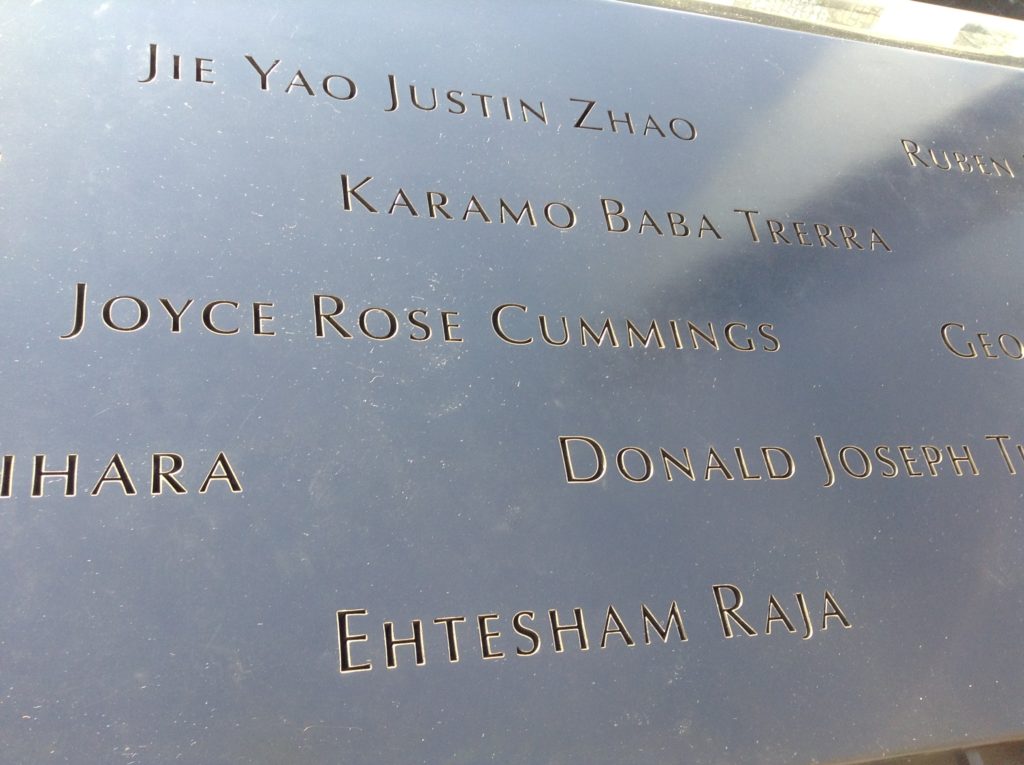 A sampling of names that span the world at the 9/11 memorial. ©2015 Derek Henry Flood

New York- Milling around the the 9/11 memorial the other day, I looked at one random, small cluster of names engraved above on of the two massive cascading fountains where the roots of the twin towers once intertwined with the earth. Though 9/11 is described as an attack on the United States or an attack on the West as a whole. reading over this small list made it feel as if the mass casualty event in New York was an attack on globalization itself for lack of a better term.

In this sample of victims it jumped out at me that one of them–Ehtesham Raja–was Pakistani. Then scanning across, I read Karamo Baba Trerra which appeared to be a West African Muslim name. Indeed he was Gambian. Then there is Jie Yao Justin Zhao from Guangzhou, China. Then Joyce Rose Cummings. a Trinidadian. The sole American in the frame of my photo is Donald Joseph Tuzio who’d lost his job and was only in the WTC that day to take part in a job-hunting workshop that was a mandatory component of his buyout package.

The diversity in just these five names–two of whom were Muslim–demonstrates that 9/11 was a global event whose magnitude devastated families from the Caribbean to China, from West Africa to South Asia. When I would photograph the anniversaries over the years at what was then referred to as Ground Zero, I was always struck by the diversity of families who arrived to collectively grieve and remember. Al-Qaeda killed Muslims from the beginning. Many of the victims in the East Africa embassy attacks were adherents. Most of the victims of salafist terrorism today  are in fact Muslim.

While for me seeing the footprints of the towers evokes a somber feeling, the memorial is a place buzzing with life. Every visitor has a smartphone. People are smiling taking photos as tourists tend to do when on holiday. Then a policeman walks by and wipes the dewy spring moisture off of one particular name as if to honor it. I notice a rose on Mother’s Day wedged into the name of a victim who was carrying an unborn child. A place that once stood as global business incarnate with people from around the world is now host to every imaginable emotion in the spectrum.

← Feet to the Fire
The Shia Ascendancy →