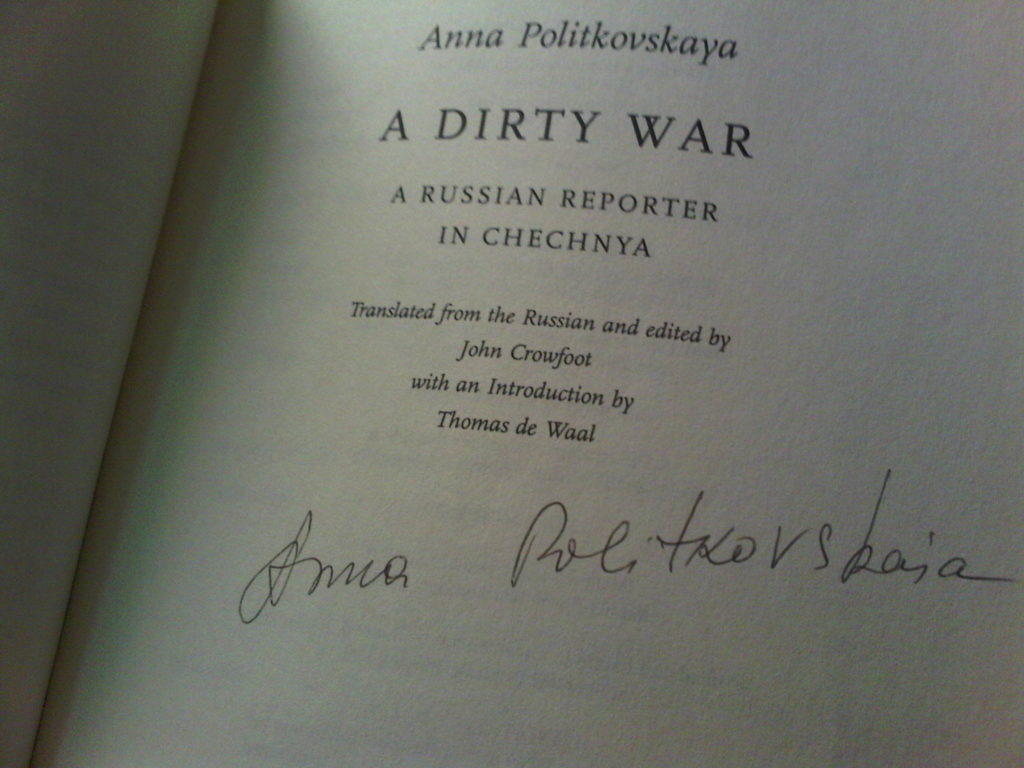 My autographed copy of the English translation of Anna Politkovskaya's A Dirty War from 2001.

New York- I was looking through some boxes of old dusty books today and came across my now most treasured copy of A Dirty War: A Russian Reporter in Chechnya by Anna Politkovskaya. Anna was killed by a so-called “control shot” in the elevator of her Moscow apartment building on October 7, 2006; the assassin still unknown. Her killing has been unsolved for over four years now and likely never will be. It is the Russian Federation after all. Many years ago now, I stumbled upon a semi-rare copy of her paperback book from England in the stacks of the Strand bookstore here in New York. I hurriedly went up to the register to pay for it knowing it was a score. Then when I went to leaf through it on the subway I noticed it was autographed. In December of 2003, I attended a conference on Chechnya in D.C. where she was supposed to speak. I disappointedly noticed she never arrived. An ally of hers, an American professor then stood up and announced to the audience that she had been notified by a crony of Vladimir Putin that if she traveled to Washington and spoke out against the atrocities of the second Russo-Chechen war, which she had every right to do as an American citizen (she was an ethnic Ukrainian born in New York holding US citizenship, the child of Soviet diplomat parents), she would be barred from returning to Russia. I have no way of ever knowing if that was exactly the case but I have no reason to doubt it either. Damn.

A Dirty War is one of the most serious books on the subject out there. Her second book A Small Corner of Hell: Dispatches from Chechnya is hard to read. I’m not sure if I ever quite finished it. I still haven’t brought myself to read any of her posthumously published works. Вы все еще пропустили Анна… (на украинском языке: Ви все ще пропустили Ганна)

← Cutting the Fuse in the Capitol
A Requiem for Tony Judt →