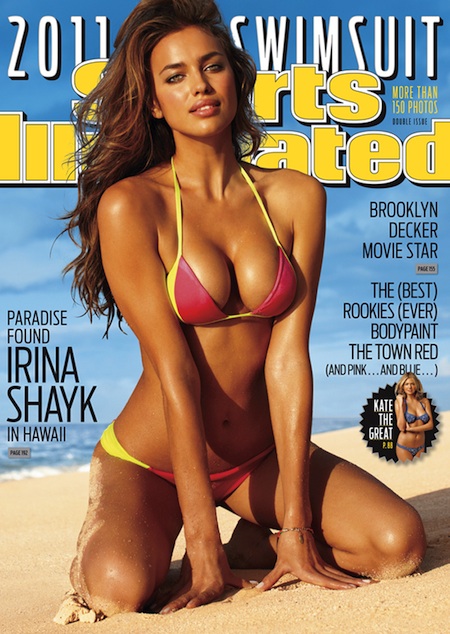 New York- So the Lotus revolution has come and gone (sort of ) and the story has moved on to the more mundane and TWD has to comment on more important matters, namely the new cover model of the Sports Illustrated Swimsuit Issue. Irina Shayk is described to the American reader in a typically dumbed down fashion as ‘Russian’ but having what appeared to be an Arabic-to-Russian-to-English transliterated last name I doubted very much she was ‘Russian’ in the way ethnic nationalities are defined in Russia. In the Soviet era and in post-Soviet successor states today like, say, Kyrgyzstan, your ‘nationality’ (what Americans term ethnicity) is written in your passport and is ascribed to you by the state. Cultural diversity in post-Stalinist in Eurasia is not a concept dreamed up by left-leaning American university professors in the early 1990s blindly promoting multiculturalism but part of an oppressive system aimed at repressing the populace.

I assume her name was shortened by a modeling agency or talent scout early on in her career to enhance her marketability. Likewise, it probably wouldn’t be prudent to promote her Muslim background in light of what happened when certain pundits got ahold of the fact that Miss USA, Rima Fakih, was, gasp, an Arab and a Muslim.

Upon a quick gander of Irina’s Wikipedia page, as I suspected, her actual last name is Shaykhlislamova which is a Russified-version of the Arabic ‘Sheikh al-Islam’ (‘Scholar of Islam’), nothing vaguely non-Islamic about that last name. She says that her father is a Tatar (though she grew up in the Chelyabinsk Oblast on the border of Kazakhstan, to the east of Tatarstan) which is a Turkic Muslim ethno-religious group that inhabits the present day Tatarstan inside the Russian Federation in the Volga region. After the dissolution of the Soviet  Union, when the Russian Soviet Socialist Republic was transforming into what would become today’s Russian Federation, it sent out a Federation treaty in the spring on 1992 to be signed and ratified by its 89 internal republics and regions: two republics refused; Chechnya and Tatarstan. While Chechnya spiraled into a violent rebellion that destroyed most of the nation and continues to this day, Tatarstan fell into line a couple of years later and flourishes today with its capital of Kazan having become one of Russia’s best destinations for investment thanks in part to its oil reserves.

So there you have it, Sports Illustrated has its first (nominally) Muslim cover girl. Hooray for progress!!! It’s time to throw the clash of civilization into the ash heap of history and move forward with over-simplified bikini diplomacy! The Kremlin currently demonizes Muslim women in the Russian Federation as so-called ‘Black Widows’ but a bombshell named Irina can help explode that myth. Wishful thinking on my part…

← Suicide Bombing at Kabul Mall-Does Anyone Even Care?
The Rise of Twitter Can Lead to the Demise of a Career →