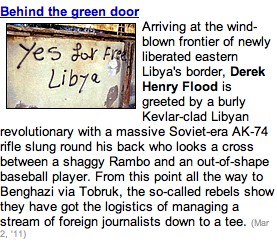 Brega- Did a ridiculously exhausting trip to the town of Brega today, criss crossing the Sahara en route. It was a hot, loud, dangerous day. Don’t know how much longer I can go on pure adrenalin. This situation is being decided by Soviet weapons. The rebels have yet to conceive an ideology that I could suss out, maybe intellectuals in Benghazi are putting something together. Best quote of the day: “If NATO troops come in here, we will crush them after we crush Qaddafi.” Clearly they were on a bit of a high after routing the Q man’s forces. The situation here is one of hyper volatility and one of the more dangerous ones I have ever seen. Q man had jets flying over a hospital in Brega and I joked to a fellow journo, “I wonder if Q is respecting the Geneva Conventions?” It’s hard to conceive how Libya can be put back together again after this and it’s hard to discern what these men are fighting for other than the immediate overthrow of Q.