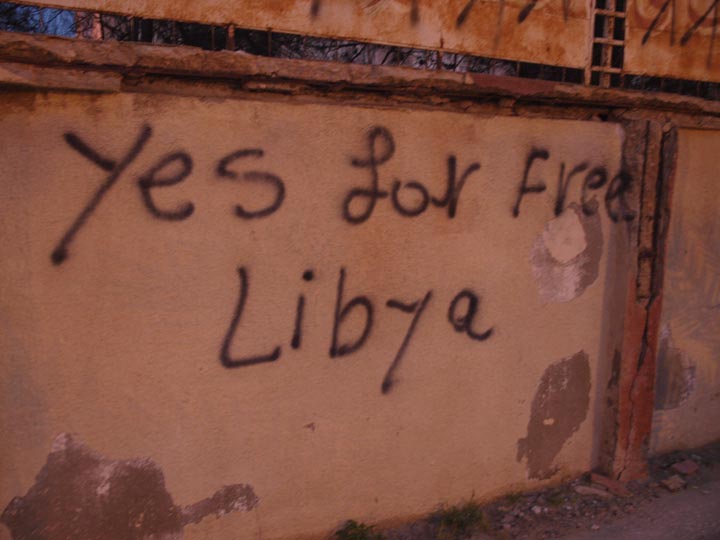 Graffiti across from my hotel in Benghazi as I arrive at dusk. The writing is on the wall for Qaddafi. ©2011 Derek Henry Flood

Benghazi- After two ridiculously exhausting days, I made it to Benghazi deep inside Libya’s ‘liberated zone.’ I went from Cairo straight to Alexandria (Iskandariyya in Arabic), crashed two nights (barely) in a hotel in a run down art deco building a block from the corniche. Took a taxi from there to El Moaaf El Geddid bus station and took a microbus 7 hours to Sallum, the last town on the Egyptian-Libyan border. Then crossed the border on foot amidst about a thousand Bangladeshi male migrant workers aged 18-30 coming the other direction and were stuck in fetid limbo on the border, Dhaka unable or unwilling to bail their countrymen out. Crossed the border and took a free ride to Tobruk then this morning jumped into a van with a group of Egyptian human rights workers to Benghazi. The internet is painfully slow here but, as someone who does not own nor has ever operated a satellite phone, I am grateful that Seif’s blockade on the net has been somehow busted or whatever has happened. If it could speed up, even better.

← A Day In Alexandria-After the Revolution
Frontline Libya: Watch Out Q Man, the Rebels Are Gunning For You →