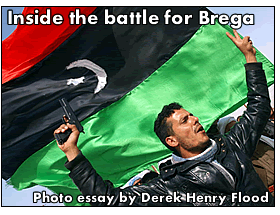 Benghazi- The net has been down for over 48 hours here and I am able to use a satellite connection at a rebel media center in downtown Benghazi across from the tumbledown corniche. Went to the front with some friends/colleagues yesterday. A group of more reckless journos almost bought it riding in the back of a technical when the one they were riding in surpassed all of the others and suddenly was the lead vehicle. They came under heavy fire and were terrified. I hung back with my guy from Der Spiegel when Kalashnikov fire started dusting up the desert and we jammed back hundreds of metres. Then we we though we were cool, a volley of Qaddafist mortars arced over our car landing in the dunes way to close for comfort and we allahu akbar‘ed it the hell out of there. Serious bismillah time. What a long day. The rest of the guys all stayed down at the front but I needed to take a day and rest. The phone and internet situation is so absurdly stressful here coupled with the fact there is no way to resupply your cash short of driving about 15 hours back to Alexandria, I haven’t slept for more than 5 hours in a night and wake up in the morning pulsing with adrenalin to where it’s go time all the time, non-stop. I feel like a lot of the Western reporters here let the rebels lull them into a totally bogus sense of security and now people are getting jacked.

Put the clip in and get in the truck. On the road between Al'aghela and Ras Lanouf. ©2011 Derek Henry Flood

These Norwegian guys got robbed coming into the city in traffic coming from the Egyptian border and got all their cash, 4 Gs worth, and gear jacked and they aren’t the first ones this has happened to. All these embed clone kids are not used to this type of old-school war where there is a real front (as opposed to the randomness of the front-less Afghan and Iraq wars) with enemy forces that are looking to kill and don’t realize they’re being manipulated by the shabaab to some degree. Qaddaf is not playing a game here. 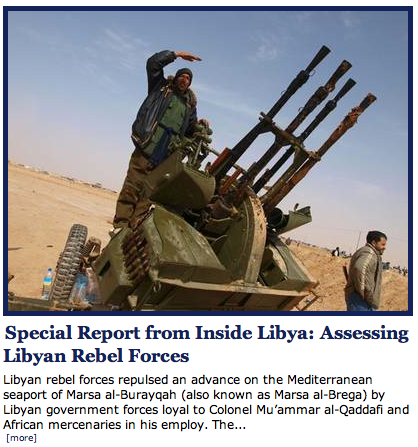