Pakistan's Geo TV shows what appears to be the wreckage of an American helicopter from the Abbottbad raid. ©2011 Derek Henry Flood

New York- There is some interesting coverage on a few of the global Pakistani satellite channels (if you comprehend Urdu to a degree) of the Abbottabad raid. Highlights include what appears to be the tail of the downed Navy SEAL chopper and former President Pervez ‘Mush’ Musharraf talking about how the raid was a clear violation of Pakistani sovereignty. 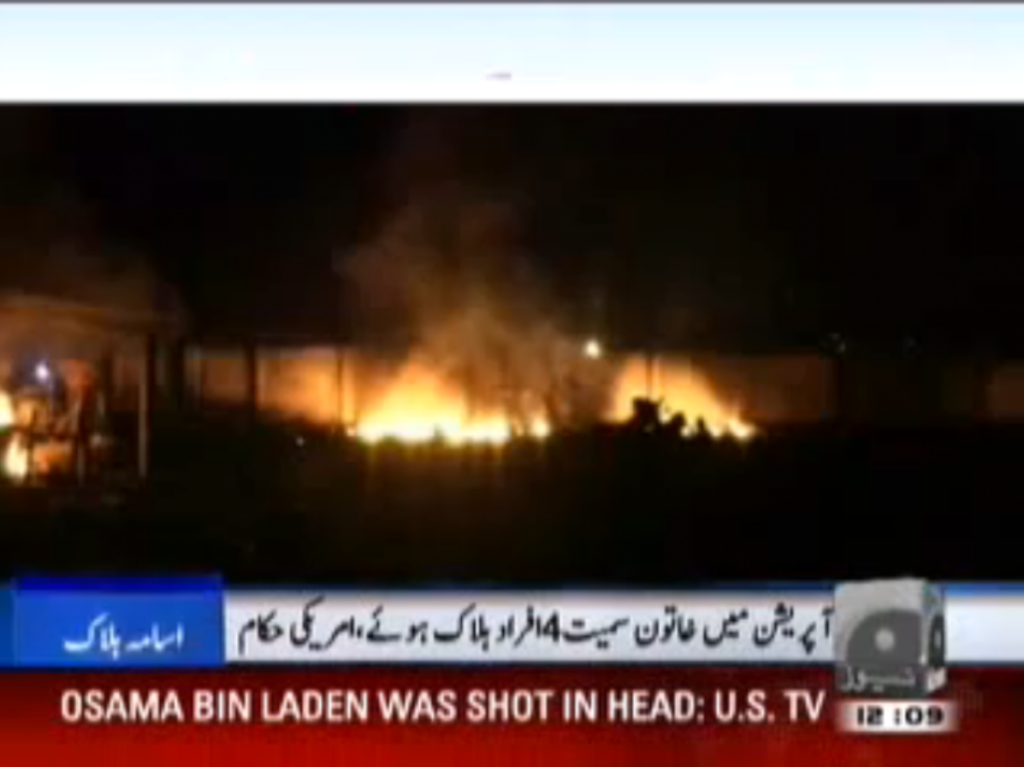 One of the more interesting things about it was the mood of the Pakistani public across a spectrum of their news sites. I did not see a single comment of anyone appearing overjoyed about this. Most seemed to find the notion of a foreign military power making a deadly raid deep inside their territory utterly humiliating. Many comments I came across, not untypical for that part of the world, seemed to say the raid was wrong not only for violating Pakistan, but because they believed the jury on bin Laden to still be out. Many in Pakistan seriously believe that the United States did not have a clear-cut enough case to kill bin Laden. Having personally been on all sides of the War on Terror short of spending the night in the dark prison at Bagram, I can kind of understand where this view comes from but I am sure no one else in America will.

The insecurity I see playing on in the comments on some of these news site forums stems directly from Pakistan’s defeats over the decades at the hands of its Indian nemesis and/or brothers. It is almost as if the United States stood in for the hated Indian military in this scenario.  Some in Pakistan may not want to condemn bin Laden simply as a residual emotional kneejerk held over from eight years of awful neoconservative unilateralist policy in South and Central Asia. On the other side of the Radcliffe Line/Line of Control, many in the Indian media and defense establishment are already no doubt gloating that Pakistan is the nexus of terror that they have been insisting it was all along. On the other side of the Durand Line, Afghans will no doubt be interpreting what all of this means for them as many fear the Karzai regime would simply crumble without Western support. There will be those in the West, particularly anti-militarists in the oh-so-subtly anti-American European left, who will now suggest even more forcefully that their self serving politicians can no longer in any way justify their respective participation in the American-led NATO coalition in Afghanistan, following the Dutch model. Let’s see what, if any, palpable immediate changes take place.

← Buh Bye
From #2 to #1: Ayman al-Zawahiri and the question of al-Qaeda’s Leadership Succession →