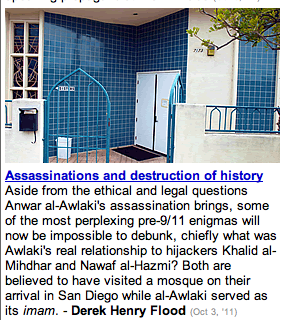 Thira- Sitting here in the very tranquil village of Karterados on the island of Thira in the Santorini archipelago is an uneasy contrast the strikes and protests rocking mainland Greece. The country is on the verge of bankruptcy which is roiling global financial markets and yet here, if you didn’t bring up the subject with locals nor tuned into Al Jazeera online, you might be able to stick your head in the black sand and wish it all away. Of course I am the quintessential news junkie and could never do such a thing. I am putting a paltry few Euros into the economy, though the dollar has actually been gaining against the Euro for the first time in a while-good news for me and perhaps me only.

After mulling over the reported killing of Anwar al-Awlaki on Friday and the consequences of what it means well beyond US-Yemeni relations, I could not help but write something after thinking of my visit to his old mosque in San Diego last spring while doing some research. I became more and more disturbed by this policy decision-cum-travesty of justice-and not for the obvious reason many readers might think. I just had to say something. Something that could be easily misinterpreted or disagreed with. I wasn’t planning on writing any articles from here as I am working on some long form writing. This incident (which of course is already being disputed by members of the Awaliq tribe who have visited the scene of the crime in al-Jawf) necessitated a more nuanced commentary apart from the overhype about AQAP and the debate of al-Awlaki’s actual role in the group.

← Sunrise on Thira
The Eleventh Day →