New York-One of the myriad topics was what constitutes or defines intervention in Syria.  A high-ranking NATO official explained to me at 2 2012 security conference that the Alliance was emphatically not going to get involved militarily in Syria even if the so-called “red lines” set forth by individual member states were crossed time and again. When NATO became deeply involved in the Libyan war, it was under the auspices of protecting civilians as stipulated by UN Security Council Resolution 1973 which outlined the multi-national mission that culminated in Operation Unified Protector. 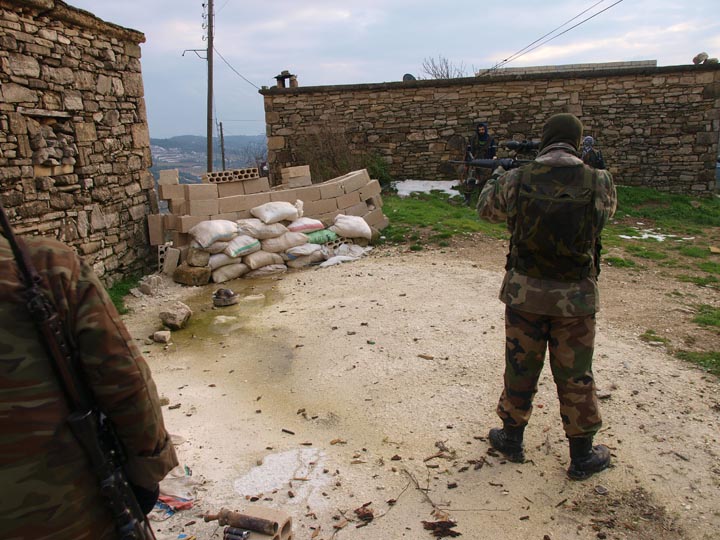 Members of the Free Syrian Army take aim at a Syrian Army post across the valley in northwestern Idlib Governorate. @2012 Derek Henry Flood

I mentioned at that February conference that I had inadvertently run across a pair of intelligence operatives on atop a cliff on the outskirts of Nalut in western Libya’s Jebel Nafusa/Western Mountains region in August 2011. I presumed the men to be either Central Intelligence Agency officers or former ones who were now for-hire intelligence contractors. They were providing real-time battlefield intelligence while decisive air strikes were being carried out in the then (until 6pm that day to be specific) Qaddafist-controlled towns of Ghazayah and Takut on the stiflingly hot plains down below. With a satellite phone and military grade macro binoculars they were apparently relaying coordinates for air strikes and feedback about the accuracy of previous bombardments. 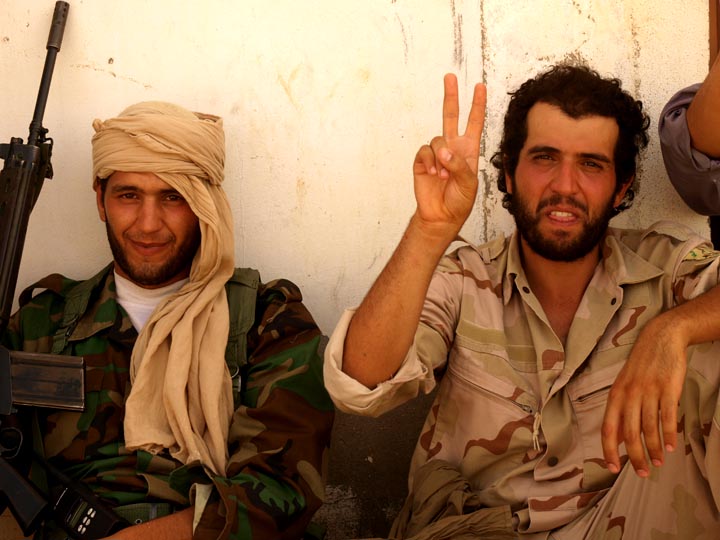 Libya’s NTC rebels rest in the shade after capturing the Qaddafist-held town of Takut with NATO and CIA assistance on July 28, 2011. ©2011 Derek Henry Flood

When I confronted the NATO official about this, which to me appeared to be in direct violation of UNSC 1973 as an outside power was clearly taking sides with one of the conflict’s belligerents thereby nullifying the idea of any form of non-partisan negotiated solution with the Qaddafi regime, NATO’s man swiftly countered that member states within the Alliance had undertaken unilateral intelligence missions which were not part of NATO’s mandate nor had its official bureaucratic blessing. Oh, ok, well I guess that wraps my question up neatly, right?

BUT…how were the Libyans on the ground, both NTC rebels and Qaddafists, supposed to interpret these elite distinctions made in Brussels, Washington, Doha, London, Paris and Benghazi? For the Libyans, the CIA and NATO were one in the same, entirely conflated entities. Not to mention perfect fodder for those on the anti-imperialist left and conspiracy theorists in general who cynically assume the overthrow of Mu’ammar Qaddafi was planned long ago at a Bilderberg Group meeting or some such thing.

Destroying Takut in order to save it. NTC rebels rest in a smashed police checkpost at the entrance to the western Libyan town after wresting it from Qaddafist forces in concert with precision airstrikes, ©2011 Derek Henry Flood

So as the viewer’s comment pointed out NATO itself is nowhere in the vicinity of launching a large-scale military intervention in Syria but individual member states are indeed carrying out an intelligence war as unilateral, sovereign state actors outside the bounds of the trans-Atlantic security structure. NATO chief Anders Fogh Rasmussen had been adamant that Syria will not become another Libya stating an armed humanitarian intervention was “not the right path.”

The conundrum escalated with the recent cross-border shelling by Syria when ordinance not only landed on Turkish soil but killed Turkish nationals which appears at least on the surface to have caused Rasmussen to change tack. An attack on one member state is theoretically an attack on the broader Alliance which the other members must then be obligated to defend if such action is deemed necessary. Now Secretary General Rasmussen has stated “We have all necessary plans in place to protect and defend Turkey if necessary.”

I also want to quickly elaborate on the unraveling of the October 20, 1998 Adana Agreement which was essentially a peace treaty between Turkey and Syria to halt PKK attacks that were being mounted from safe havens on Syrian territory at the time in a vicious proxy dispute over water rights. Hafez al-Assad, near the end of his thirty year reign, sought to improve relations with Turkey and expelled Abdullah “Apo” Ocalan, the PKK’s cult-like leader. (Ocalan was captured in Kenya on the run in 1999 and extradited to Turkey where he remains holed up in an island prison today in the Sea of Marmara) Turkish-Syrian relations than greatly improved as Turkey tilted away politically from the European Union and began renewing ties, particularly economic ones, in the lands that constituted its former Ottoman realm (as well as warming relation with the clerical regime in Iran as part of its “zero problems with neighbors” policy).

Turkey nearly mounted an invasion of Syria in the late 1990s under the pretext of attacking the PKK. Turkey has also had a long time military presence in Iraqi Kurdistan and parliament in Ankara recently renewed Turkey’s standing hot pursuit mandate whereby Turkish ground forces can enter Iraq when giving chase to PKK fighters. So Turkish troops moving into Syria en masse is not so unthinkable in the present scenario.

The PKK has been stepping up attacks across southern Turkey in recent months and many Turks believe Bashar is playing his father’s old PKK card from the 1990s in an act of calculating strategic desperation. After all, what else does the already isolated Syria regime really have to lose at this point?  Even if the Assad government can somehow survive, relations with an AKP government in Turkey will not be put back together again. It is from this calculus that the Assad regime is basing its tragic strategic decisions and going with what is known as “the Hama solution” (code for scorched earth tactics in crushing any serious threat to their Ba’athist Alawi dynasty)