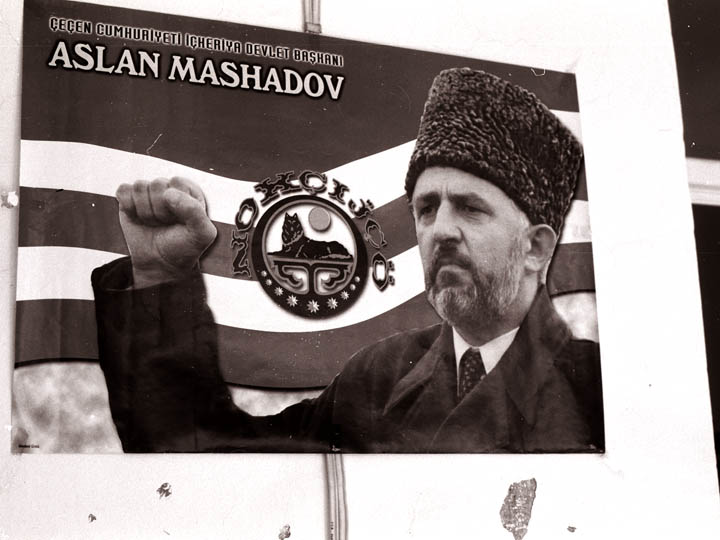 A Turkish-language poster of the late Chechen rebel leader Aslan Maskhadov. The poster reads “Chechen Republic of Ichkeria State Leader” with “Noxçijcö” in the center being the endonym of “Chechnya”as transliterated into Turkish. This term is surrounding  a wolf which is the animal symbol of the Chechen people favored by nationalist separatists. I photographed this poster in a school in the village of Duisi, Georgia south of the Chechen border along the Alazani river. ©2002 Derek Henry Flood

New York- In the two weeks since the tragic double bombing of the Boston marathon with improvised explosive devices, the media has fixated on the ethnic and religious background of the Tsarnaev brothers of Cambridge, Massachusetts. Though various mass casualty attacked have been carried out in the United States in the past year, media outlets did not fixate on whether James Eagan Holmes, who killed 12 people in Aurora, Colorado or Adam Lanza, who killed 26 people in Newtown, Connecticut were Protestants or Catholics nor what their precise ostensibly ethnic European backgrounds were.  But the fact that Tamarlan and Dzhokhar Tsarnaev were ethnic Chechens and [I would think Sufi] Muslims while also not being native-born Americans has become an obsession of U.S. national media which has almost no knowledge of the history nor present dynamics of the North Caucasus region of which Chechnya is a central part.

In the wake of the Boston attacks and with the Sochi Winter Olympic Games just 10 months away and the insurgency’s western most fringe not far with just 250 kilometers (155 miles) drive separating Sochi and Nalchik, it may behoove some of the ultra ambitious yet very young D.C. jihadi wonks or overnight area experts in the Dupont Circle-Think Tank Row (Massachusetts Avenue) zone to read up on some of this stuff before inadvertently advancing an FSB narrative on the North Caucasus.

With so many people suddenly thrust in writing about a region with which they appear to have only the faintest familiarity (judging by for instance referring to Dagestan as “Russia” rather than as a constituent republic of the Russian Federation), it struck me that a minimal reading list might be useful.

This is by no means meant to be a comprehensive list but more of books in my collection the influenced me into the intrigue that is the Caucasus region. A longer list would have to begin with Anatol Lieven’s Chechnya: Tombstone of Russian Power which was published only months before the start of the second war in 1999 or say Thomas de Waal and Carolotta Gall’s Chechnya: Calamity in the Caucasus all the way to Emma Gilligan’s Terror in Chechnya: Russia and the Tragedy of Civilians in War.

Here is my very short Chechnya/North Caucasus reading list in no particular order as drawn from my personal library:

1. A Dirty War-A Russian Reporter in Chechnya by Anna Politkovskaya

I stumbled upon an autographed copy of the incredible book in New York’s legendary strand bookstore not long after returning to the U.S. from covering the Afghanistan war in the fall of 2001. With a classic James Nachtwey cover photo catching my eye in the book stacks, I quickly became enthralled with the story of Chechnya forever. Part of the reason I went to the first D.C. conference I ever attended was because Ms. Politkovskaya was slated to be a speaker. Disappointed she wasn’t actually there, all day throughout the conference I wondered what happened to her.

Finally a very frustrated audience member shouted out that she didn’t come to Washington because she had been threatened by the Kremlin that were she to speak about war crimes in Chechnya to [an anti-Kremlin] D.C. crowd, she would not be allowed to return to Russia (she was a dual Russian/American citizen). She was then killed by a “control shot” less than three years later while entering her Moscow apartment building. 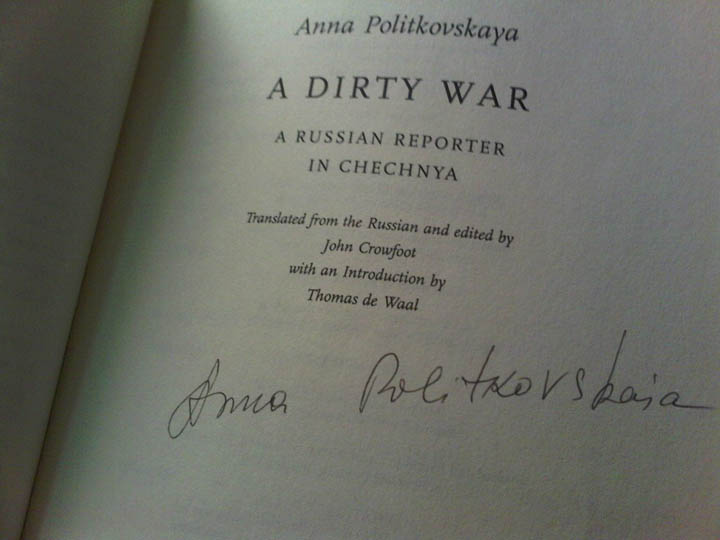 My autographed copy of the English translation of Anna Politkovskaya’s A Dirty War from 2001.

2. The Chechen Wars-Will Russia Go the Way of the Soviet Union? by Matthew Evangelista

This analysis of the first Chechen war (December 1994-August 1996) and the early stages of the second war beginning in the fall of 1999 discusses the role (or lack thereof) of international law in the Chechen conflict and what it meant for the future of democratization in the Russian Federation. Done from an in-depth sociological angle, Evangelista examines the broader problems inherent to Russian federalism when faced with ethnic and regional nationalisms in places other than Chechnya such as Tatarstan, Bashkortostan and even Sakhalin island facing the Sea of Okhotsk. A fascinating read.

Nearly all of the books in my collection on Chechnya have covers and are illustrated by black and white photography. The Chechen wars were perhaps the last great era of black and white photojournalism before the American intervention in Afghanistan after 9/11 heralded in the mainstreaming of digital photography writ large. The defining photography book of both Chechen war is Open Wound by Stanley Greene by Trolley Books of London. As a fellow photographer, I cannot recommend this stunning, chilling book highly enough. 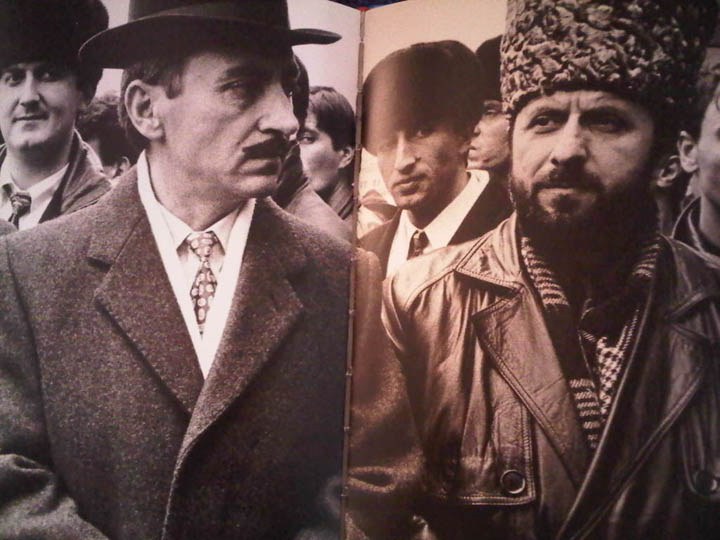 Stanley Greene’s photo of Chechen rebel President Dzhokhar Dudaev  in Grozny in February 1994. Dudaev was assasinated while talking on a satellite phone on April 21, 1996. To Daudaev’s right is rebel Vice-President Zeilmkhan Yanderbiyev. Yanderbiyev succeeded Dudaev as president and was later assassinated in Doha, Qatar on February 13, 2004.

4. Chechnya Diary: A War Correspondent’s Story of Surviving the War in Chechnya by Thomas Goltz

This book by veteran Caucasus correspondent Goltz is centered around in the notorious Samashki massacre that took place in April 1995 near Chechnya’s eastern border with Ingushetia. Goltz’s book, a sort of sequel-at least in title anyway-to his earlier Azerbaijan Diary, is a real journo’s type of book. It contrasts the viciousness of war and it attendant crimes with the banal egotism and tiresome logistical challenges of getting a tough story out of a deadly environment.

5. The Man Who Tried to Save the World: The Dangerous Life and Mysterious Disappearance of an American Hero by Scott Anderson

My current read about the disappearance of The Open Society Institute’s Fred Cuny who was on his way to Bamut, Chechnya in February 1995 and was never seen again. With a stark cover photo diptych by the above mentioned Stanley Greene, this book reads like a fictious thriller save for the scary fact that it is real.

6. A Small Corner of Hell-Dispatches from Chechnya by Anna Politkovskaya

Politkovskaya’s 2003 follow up to a A Dirty War with a dramatic cover photo by Dutch photojournalist Eddy van Wessel. Hard to read but of course well worth it.

7, To Catch a Tartar: Notes from the Caucasus by Chris Bird

A memoir of the chaos taking place in the post-Soviet Transcaucasus of the 1990s by a former AFP and AP Tbilisi-based correspondent with cover photos by my colleague Thomas Dworzak.  This book focuses not solely on the first Russo-Chechen war but also on the tumult in Georgia and even a bit on Abkhazia-which are essential to understanding the overall situation in the greater Caucasus region today.

Griffin’s book explore the legacy of the legendary ethnic-Avari anti-colonial warrior Imam Shamil from a sector of Avaristan in what is now Dagestan. Griffin writes about the difficult sectarian and communal history of the Caucasus ending with the rise of the late Shamil Basaev, named after the 19th century Sunni Avari resistance leader.

Smith, an AFP correspondent during the first Chechen war and later IWPR analyst in Tbilisi, profiles Russia’s geopolitical enfant terrible that is the Caucasus. All in all, a complex, fantastic read.

9. Chienne de Guerre: A Woman Reporter Behind the Lines of the War in Chechnya by Anne Nivat

Nivat’s recollection of 6 months spent behind the lines after sneaking in Chechnya from neighboring Ingushetia during Putin’s re-invasion of the rebellious independence-minded republic. Nivat’s book highlights the importance of refusing to follow rules imposed on modern journalists by both authoritarian and democratic states (think of the French military impeding journalists in northern Mali at present). A decade ago, Nivat very astutely put the hopelessness of the conflict in a passionate context in an excellent NPR interview.