New York- I’ve known Ray Pagnucco for some twenty years now. Ray is constantly on the move in Asia and Africa, often interested in uncovering the world’s lesser told e stories that strike his imagination.

The following guest post stems from Ray’s most recent trip to what is likely the world’s most perennially troubled nation-state if one goes by sheer decades of political violence (sorry clichés about Somalia since 1991 but Burma has been raging since 1948). Ray recently crossed from the western-most region of southern China’s Yunnan Province into Burma’s northern Kachin State to document the hardscrabble rebels of the Kachin Independence Army. Enjoy! 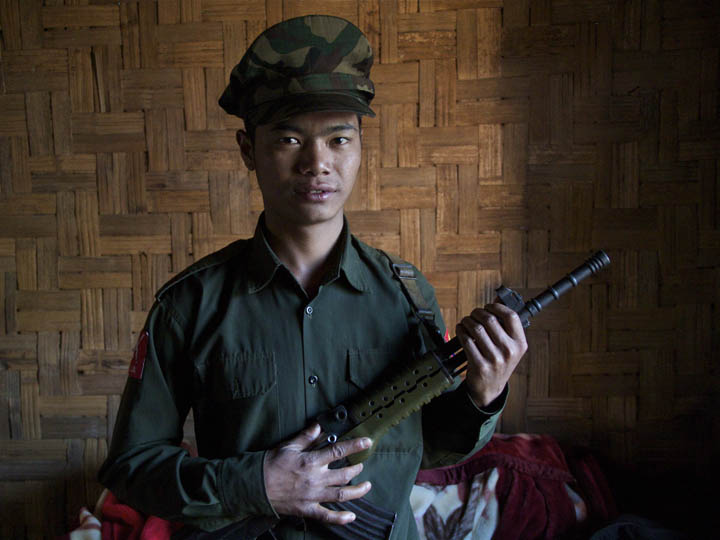 KIA member with rifle
Young ethnic-Kachin fighter posses with his rifle. This rifle is Kachin-made copy of the Chinese Type 81. The Kachin fashion many of their own weapons including claymore mines, grenades, mortar rounds and ammunition. I asked one KIA official why they didn’t buy weapons from China. He replied, “we didn’t want to anger Burmese forces and
we never thought we would be fighting again. So we put our resources in to building a civil society and infrastructure.” ©2013 Raymond Pagnucco

It is well known to any highly organized ethnic group that the road to greater autonomy is a rough one replete with of hopes, dreams and a considerable amount of uncertainty that come with a national liberation movement. When your an ethnic group in Burma that makes up just 1.5% of the population of a country of 60 million the reality of ever being autonomous in even more challenging.

However the Kachin Independence Organization (KIO) and their armed wing the Kachin Independence Army ((KIA) have been pushing for greater autonomy since the the early 1960’s with only limited success. After about three decades of fighting the KIO and KIA had reached a ceasefire with the Burmese junta then known as the ominous sounding State Law and Order Restoration Council (SLORC)* in 1994.

*The SLORC was later renamed the State Peace and Development Council in 1997 and then officially dissolved by the infamous General Than Shwe in early 2011 when Than abdicated the junta’s rule in the transfer of power to President Thein Sein’s civilian government.

The1994  ceasefire gave the KIO and KIA a fair bit of autonomy over a large area of Kachin State and parts of Shan State along the Chinese Border. This Kachin autonomous zone allowed the KIO is able to collects taxes at border crossings with China and engages in various business deals throughout Kachin State. Most of the trade often revolved around the monetization of natural resources such as jade, timber and gold. The KIO-though no angels themselves in this prolonged conflict-also launched a ambitious opium eradication campaign within the territory under its control. 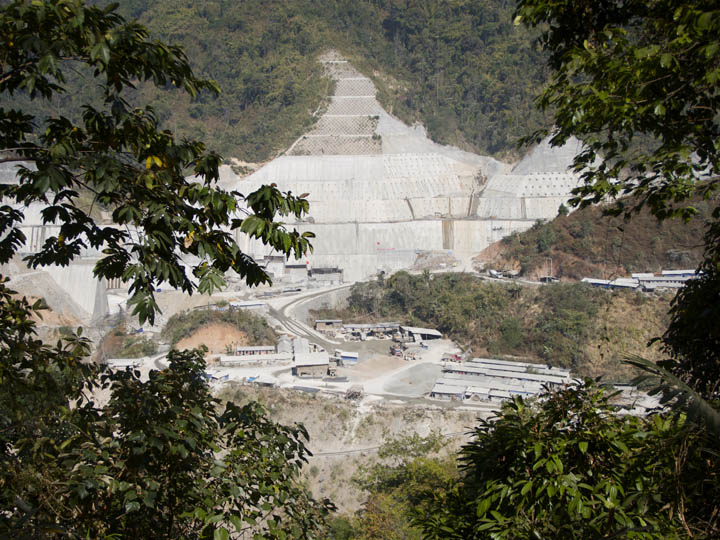 Chinese-built dam
While the fight rages in Kachin State, work continues unabated on the Chinese hydroelectric dam that has been a hot bed of contention between the Burmese and the Kachin people. The electricity generated by this dam will return to China. If the Kachin want access to the power produced by the dam they will be required to purchase from the Chinese.  ©2013 Raymond Pagnucco

However in June 2011 renewed violence broke out between the KIA and the Burmese military effectively ending the seventeen-year long ceasefire. The fighting was a result of the Burmese regime’s attempt to secure areas around lucrative energy projects in Kachin and Shan state, the majority of which are funded by the Chinese government while in an area traditionally controlled by the KIA.

For the first year and a half the KIA was able to hold its ground and tried on eleven separate occasions to end the fight and work on a new ceasefire. Then in late December 2012 the Burmese escalated the fighting using aerial attacks to push the KIA back toward to their de-facto capital of Laiza hugging the Chinese boorder.  Government troops have since stopped their larger advance but sporadic fighting continues and an estimated 100,000 Kachin civilians have since been displaced. 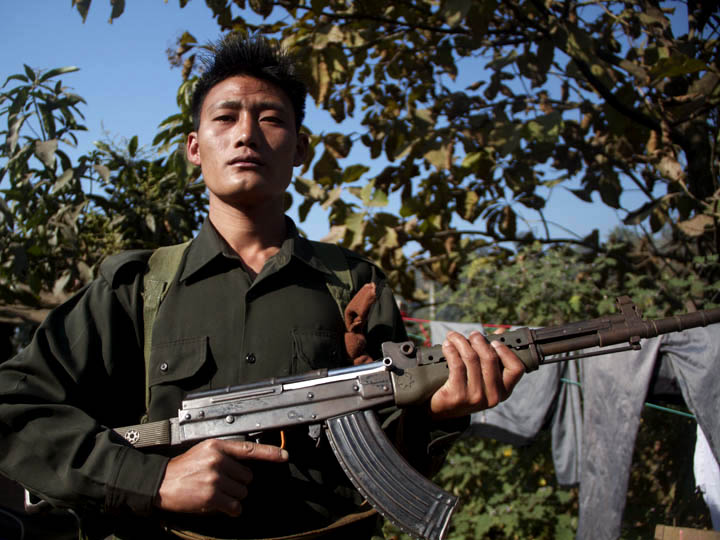 For a number of years I have kept a close eye on Burma and the various ethnic conflicts that have plagued the country since it was granted independence from Britain in the wake of the the Second World War. I have travelled several times with the Karen National Liberation Army in Karen State to wittiness the war they had been waging for 63 years. This past February I felt it was time to make a trek to Laiza and see what they Kachin where going through and to understand why they were fighting following the ceasefire’s collapse.

When you get to the KIO and KIA controlled areas you will see the result of the former 17 year ceasefire. From roads to schools to sending students abroad for higher education, the Kachin upheld the rule of law and where able to transform their area into a functioning civil society that other ethnic groups like the Karen were not able to achieve after the fall of their d-facto capital of Manerplaw fell to the Burmese in early 1995. The Kachin used their natural resources to create something out of nothing and waited for many year to have a real peace deal with the Burmese military government that went beyond a ceasefire agreement that are so often broken by the Burmese military known locally as the Tatmadaw. 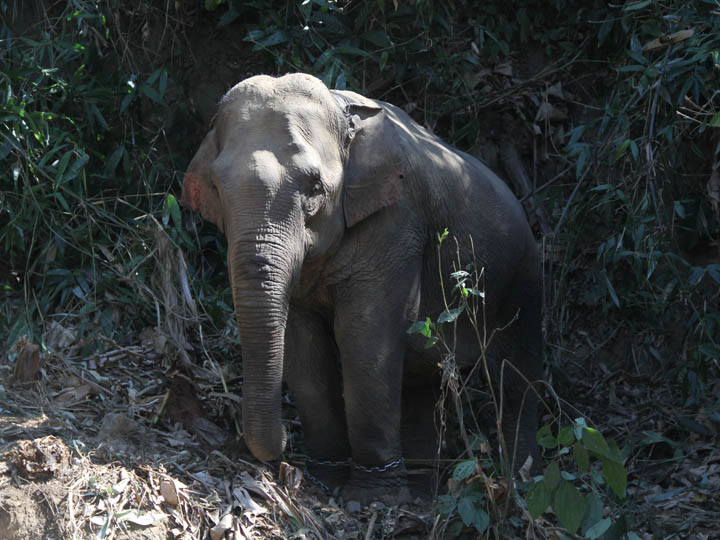 Logging Elephant
On my way to Laiza I happened to see an elephant used for logging on the side of the road.I realized that this elephant was more than just a beast of burden. It was a metaphor for Burma. A mighty beast yearning to be free but having trouble with coming to terms with it’s own reality. ©2013 Raymond Pagnucco

Although Laiza is essentially a city under siege, Stalingrad it is not. Upon  arriving in Laiza, I noted that many of the businesses were shuttered.. Its is normally possible to get in and out of the city through either the official nearby Chinese border crossing that has now been closed to non-Kachin. It is also possible or to take a jeep and travel five-six hours on a bumpy mountain road (thought this alternate route is impassable during rainy season). On they way I passed open pit mines, a Chinese dam and elephants employed in logging.

The Kachin people differ from other regional ethnic groups in that they are overwhelmingly Protestant or Roman Catholic and cherish democratic societal practices. During my visit the locals appeared be in relatively good spirits, believing that one day they will be victorious even if that means they are forced to withdraw from population centers and retreat into the jungle to fight or a yet another peace deal will be brokered.

Shot of the lower receiver of the M16
A veteran of the first war between the KIA and the Burmese military proudly displays this US Government issue M16. If you look at the lower receiver you can still see Colt AR 15. M16A1 stamped on the side.
This weapon most likely made its way to Burma via arms deals between ethnic armies and the Thai military or black market arms dealers who took advantage of the weapons left behind by the US in Vietnam, Laos and Cambodia. Either way after 40 years the ghosts of the US military adventure in Southeast Asia still hunts the jungle to deadly effect.  ©2013 Raymond Pagnucco

When and how this war will end is anyone’s guess. The Kachin and the Burmese authorities have met over a dozen times since the current bout of war and a lasting deal has yet to be reached. President Thein Sein has told the international community that he has ordered the army to stop it’s war against the KIA and KIO but this has not led to lasting change in the region.

This is a clear sign that the army is still in power in Burma and the civilian government of Thein Sein (a former junta member himself) is mostly a veneer in the brutal realities of Burma’s ethnic hinterlands.

Some say that this conflict will only end when the KIA and KIO are completely obliterated. Other say that this battle was only practice for the Tatmadaw for a larger war with the United Wa State Army and they the Kachin will get some kind of deal when fight in Wa State begins.”

TWD Editor’s Note: Despite having publicly shifted from a military junta to weak civilian rule with promises of reforms coupled with the limited return of Western corporate investment, the harsh militarism entrenched since Ne Win’s March 1962 coup d’état followed by the era of SLORC/SPDC-rule after the disastrous student-led People Power Uprising of August 8, 1988, the aggressive stance of Naypyidaw’s troops is as strongly felt as ever before in Burma’s independent-minded minority homelands as ever before. And it appears the rebels of the KIA will not be abandoning the fight any time in the near future. 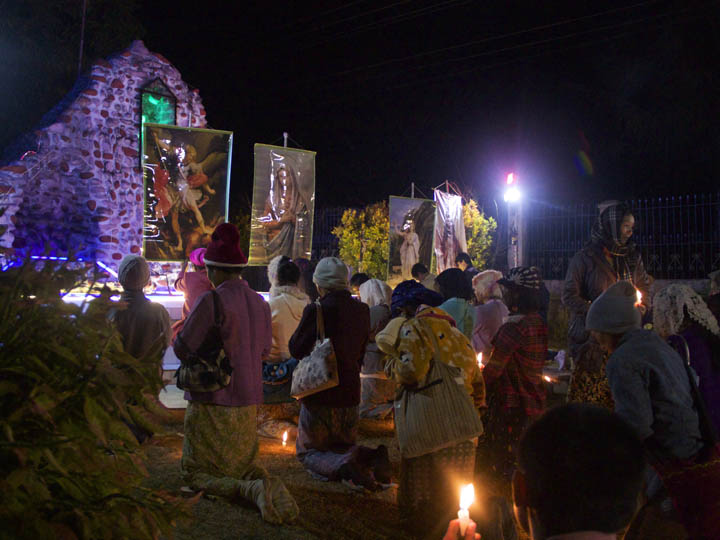 Women praying at shrine
Since fighting Between the Kachin Independence army and the Burmese military escalated at the end December 2012 and beginning of January 2013, women from the Catholic church in Laiza walk the streets reciting the ava maria praying for peace in Burma. One night I decided to join them as they made their loop around the city. At the end of their loop the women end the evening back at the Church to pray one last time in front of a technicolor shrine to the Virgin Mary. .©2013 Raymond Pagnucco 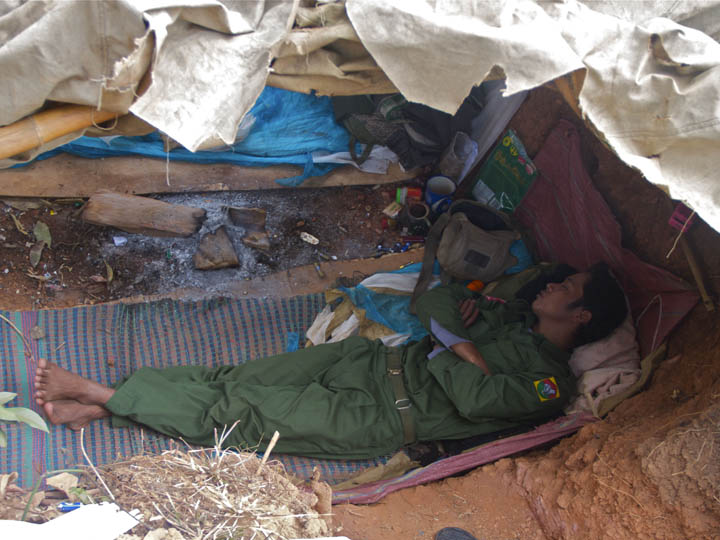 KIA rebel sleeps in trench
After a long night of guard duty a KIA member sleeps in a dug out dirt trench. This picture was taken at the front line at Laiza. Three weeks earlier this was a rear guard position now it’s a frontal one.  ©2013 Raymond Pagnucco

For more, see Raymond’s short film The Front Lines of Laiza over at CNN’s iReport.