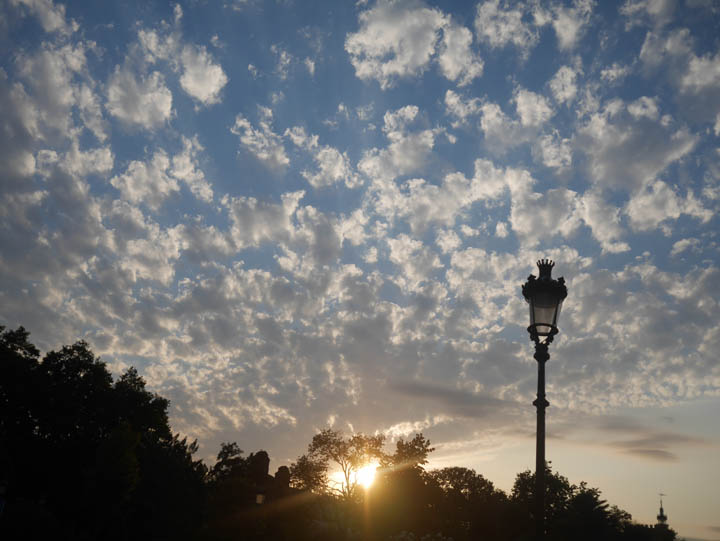 The sun sets over Parc de la Ciutadella. The air and light in the Mediterranean region is like no other which is part of  why I return year after year. This spot is calm incarnate. ©2014 Derek Henry Flood

Barcelona- I realized the other day that going to wars for years and years affects perhaps not only the psyche over the long term but also the synaptic algorithms that are part of an unending string of decision making processes driving daily routines. I can be in the most secure Western city environment but am still often making the smallest decisions in a wartime mindset without even realizing it. Hard to explain but basically always bracing for the worst. Here the most petty detail like the food stores being closed on Sundays somehow evokes the most careful conflict behavioral patterns. I remember in Afghanistan in 2001 when ABC and CBS had teamed up to set up a joint broadcast compound and they had gone to a bottled water warehouse in Tajikistan beforehand and bought half the potable water in Dushanbe to take with them down to Takhar.

Those early experiences had a molding effect on me that is often difficult to gauge. Now even if I am just coming to the EU, I find myself prepping and packing as if I was going off to war. You can leave a war but war never quite leaves you.

The last significant acts of terrorism here were a parking garage bombing in June 1987 that killed 21 attributed to ETA and a bar bombing that December which killed an American sailor during a Christmas port call and was claimed by Catalan radicals. But the wealthy from societies in conflict today seem to all be here as tourists and so to me war is never far away. Just before I shot the above photo, a nouveau riche family with a brand new Porsche bearing unmistakeable Ukrainian plates had their car towed where friends and I were sitting and asked for our help as they did not speak Spanish much less Catalan. As I was shopping for clothes in the discount department store yesterday, I find myself reflexively trying to discern where the niqab-clad North African in line ahead of me might precisely be from. This stuff is just always on my mind. An innate curiosity coupled with too much experience often makes it difficult to zone out.

The past few years the only way I could justify being here was by go to and fro to conflicts; Libya in 2011, Mali in 2012, Iraq in 2013. This summer I decided to simply return to Catalunya without forcing myself to justify it. Did I miss out on the big Sinjar drama? Of course I did. One thing I have learned in all this time is that if you do miss out on a story, if you’re patient enough another one will pop up in no time. Despite tracts written about how this is the most peaceful time mankind has yet lived in comparative to the scale of the World Wars that consumed the first half of the last century, there are seemingly always more wars to come. They may not have vast trench networks and poignant ballads written about them but today’s wars are many if not ‘Great’ or “Patriotic’ in the grandiose appellations of an era gone by. 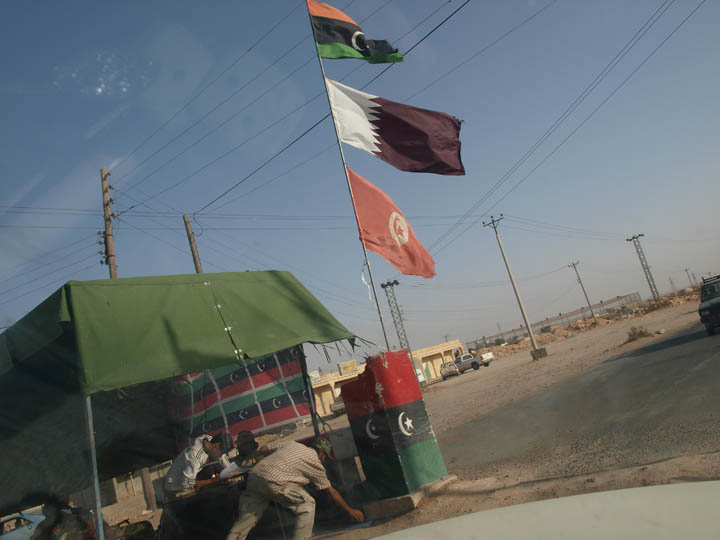 To relative safety. After being nearly shot by a regime sniper nest in Qwaleesh, my ultra agile driver roared our Hi-Lux back to a friendly rebel checkpoint hoisting Qatari and Tunisian flags. That era is the thing of the past as Libya has no single internal enemy to rally around and Libyans have turned their many guns on one another. ©2011 Derek Henry Flood

For what I suppose is part of the make up of my personality every single trip I have ever done has been alone. I meet other journos in war zones but almost always by sheer happenstance. No one has ever bought me a plane ticket to go anywhere ever. No big name outlet has ever called me up out of the blue and thrown an assignment at me. Everything I’ve ever done has essentially been as an autodidactic hustler.

I’ve worked in conflicts since 9/11 yet have never been written up as a ‘veteran’ while loads of people from the class of Libya 2011 have quickly surpassed me at least in terms twitter/instagram fame and so forth. Hell, one random guy with an iphone who spoke zero Arabic wound up with a spot in the world’s most prestigious photo agency and with a documentary then being made about his exploits by a big name Hollywood director. Suddenly people were getting famous for not dying after others did. Coming to NYC and winning big awards in the aftermath. The ‘Arab Spring’ morphed into a major turning point for journalism itself. It became a veritable free-for-all environment for those just getting started.  Safety norms were either not heeded in many instances or simply went out the window of the technical fighting truck. 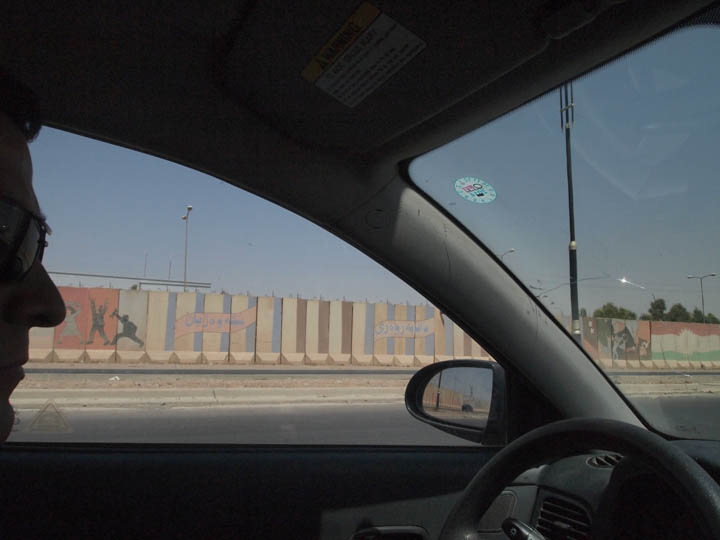 My fantastic fixer driving us into outskirts of Kirkuk last year. He is plenty busy now, one can be sure. ©2013 Derek Henry Flood

To my knowledge another photojournalist has never shot my photo while I’m working along a front line. If I went missing in one of these places there wouldn’t be a flurry of action shots of me to raise awareness. I’ve also never worn or had access to a bullet proof vest. Perhaps I simply don’t do enough socializing when I’m in these places. To add to that I also occasionally like to cover events before they’ve been totally blown out in the mainstream. In Iraq last August I didn’t encounter a single other war correspondent. Iraq was considered a dormant conflict to many and was definitely not ‘hot’ story-wise what with Syria going on next door.

I’m currently debating whether its worth doing any more wars from here on out. Perhaps a couple more. There is only so much that can been gleaned from hiking up a mined hillside or facing off a guy with a Dragnov rifle when you only have a long camera lens to shoot back with. Of course to truly understand the human dynamics you have to actually go to these places. There is a middle ground between an adrenalin rush and an armchair twitter warrior also where you can go to Kiev or Erbil and be mostly safe without venturing toward Donbas or Mosul for example.  This is the modus of the more reserved journos or more actionable wonks.

There’s a whole crew of millennial wunderkinds making their names in prominent think tanks or King’s College War Studies Department or Princeton’s Near Eastern Studies Department by analyzing trends in salafi social media and venturing into the ummah’s safer nodes like Casablanca, Tunis or even Sana’a on a good week without ever really putting their lives at risk.  But I don’t fit into that category either. A senior analyst in DC once told me on the sidelines of a conference that as far as he was concerned a true subject matter expert concentrates on one, possibly two, but no more than three countries (his were Morocco and Algeria and sometimes Tunisia). That gave me insight into just how competitive the think tank set is.

Rather than befriend gatekeepers who prove difficult, I just move in another direction until a more friendly door opens. Things have a way of falling into place if you let them it seems.

A few weeks ago I went partying with some friends atop a dilapidated bunker from the civil war here where people now congregate for sunset gahterings with a spectacular view of the city below. That bitter war between Franco’s Nationalists and the floundering Republicans is firmly in the ash bin of history, its legacy is relegated to anti-fascist graffiti slogans and sparse ruins from the era. Every war, no matter how long or brutal, eventually ends.  Even in dark, peace can and will be found in light of war. 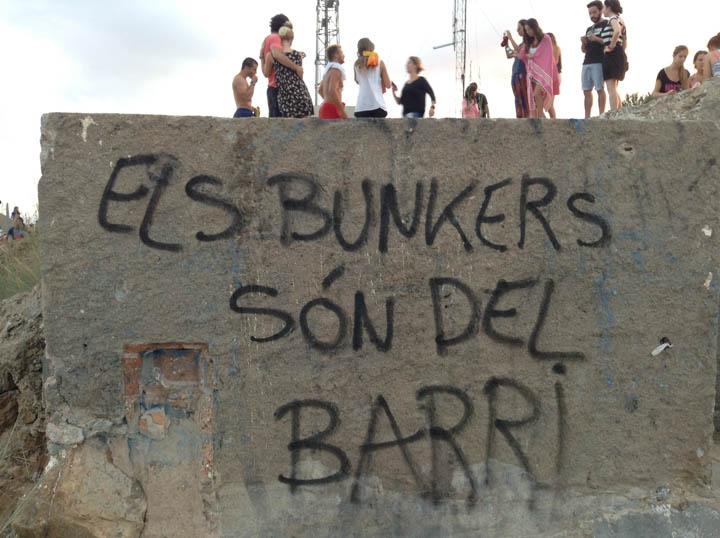 A bunker from the Spanish Civil War has now become an underground party place for people here. The Catalan reads: “The Bunkers are of the neighborhood.” I think whoever wrote this was trying implore either for outsiders to respect the area or maybe a ‘locals only’ vibe. There is some old adage about every war zone eventually becomes a tourist destination. That could not be more true with this city. ©2014 Derek Henry Flood