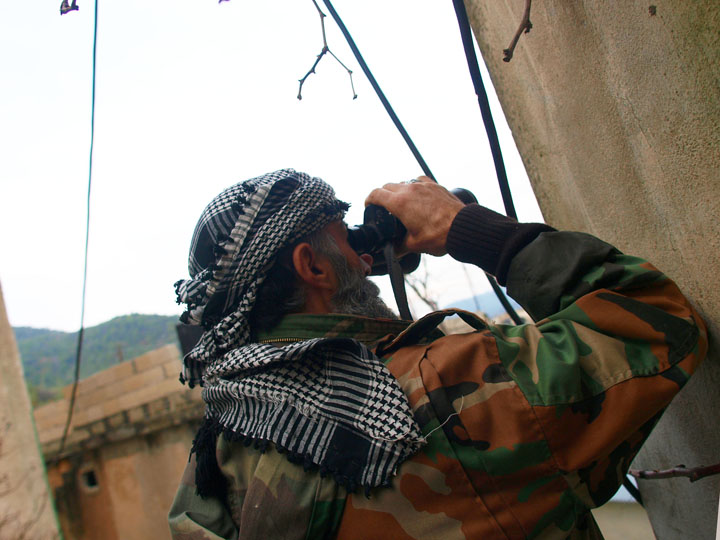 A lost opportunity? Abu Muhammad, a Free Syrian Army unit commander in Idlib, pleaded for the international community to implement a no-fly zone extending 5 kilometers from the Turkish border to create a cordon sanitaire for fleeing refugees and injured rebels. His call was never heeded. ©2012 Derek Henry Flood

Barcelona- I have a new report out this week for IHS Jane’s Terrorism and Insurgency Centre in London on my analysis of the Islamic State’s brutal campaign to establish a religio-politcal entity among several of the former Ottoman (the last recognized caliphate in existence) vilayats that now inhabit the governorates of Syria and Iraq where IS is working to consolidate territorial control. 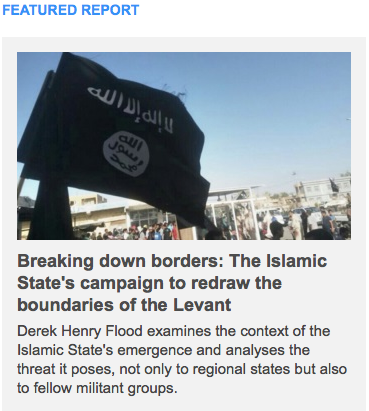 The conflict inside Syria morphed from minor protests that resulted in disproportionate regime reactions that in turn gave rise to an armed rebellion in 2011. That armed rebellion which I explored in early 2012 then became Islamized by both Islamist Sunni nationalists and later by salafist peer competitors. A cacophonous battlefield erupted over time where sectarian difference, religious difference and ethnic divides created perhaps the most highly complex internecine war of the post-modern era in terms of the sheet number of war fighting groups and conflicting agendas.

On a related note, I returned home after a great day out with friends here in the city to check my twitter and learn of the execution of James Foley.  The reactions to the tragedy on twitter were sadly all too predictable. Many tweets sought to emphasize that the overwhelming majority if IS’s victims in Syria and Iraq are indigenous peoples who perish largely in silence and that the Foley case was overshadowing a grand scale human tragedy with the plight of a few Westerners being over played by the Western media.

Yet other tweets dwelled on the ethics of sharing such an awful product or even watching it at all. I recall these precise arguments from beheadings in the early years of the Iraq war and other incidents in Pakistan and Saudi Arabia. Aside from those, there is the talk of the predicament of what to do about the remaining hostages. Then arguments begin to become ballooned out to what Obama should or should not have done in Syria earlier on, how Benghazi affected the White House’s Syria policy or lack thereof and so forth. Much of this echoes the Iraq war to begin with. Hostages crises, myriad militant organizations, Ba’athism, Kurdish secessionism etc.

Obama has sought to improve America’s standing here in the EU and around the world as a whole which in theory is a commendable objective after years of disastrous neoconservative-inflected, poorly informed foreign policy decisions. But there is also a futility in this as an end goal. I recall talking to a Catalan woman I was rooming with in this neighborhood some years ago and-as is often the case as an American in the EU-she volunteered her views on U.S. foreign policy without me prompting her to. “I think Obama is a an actor. A very good actor” she said to me. Was she referring to his not closing down Guantanamo? It didn’t really matter. The initial euphoria over his election had long since waned and knee-jerk cynicism had set in.

I remember not long before that when people here were heralding the end of the Bush era and a new, hopefully healthier trans-Atlantic partnership. But of course latent anti-Americanism reared its head again in no time at all. Was his refusal to overtly (as opposed to covertly) act on Syria related to it being too evocative of Bush unilateralism that turned so much of global public opinion against American’s immensely tarnished image? Or was it the fact that Washington’s Israeli partners who occupy a swath of southern Syria hadn’t themselves decided on their own response to which D.C. could not act without their consent? As an outside observer one can only speculate on these matters. An observer is not one of history’s actors so to speak. An observer bears witness and records events but is not meant to influence them in the purest interpretation of observational ethics.

The rise of Baghdadi’s Islamic State and the brutal death of James Foley illustrate that whatever is being done with regard to Iraq and Syria by major and regional powers alike is an abject failure. There will simply be more air strikes, more hostage issues and increased radicalism should the present course continue unchallenged.

← Pakistan Triptychs in Barcelona
Peace In Light of War →