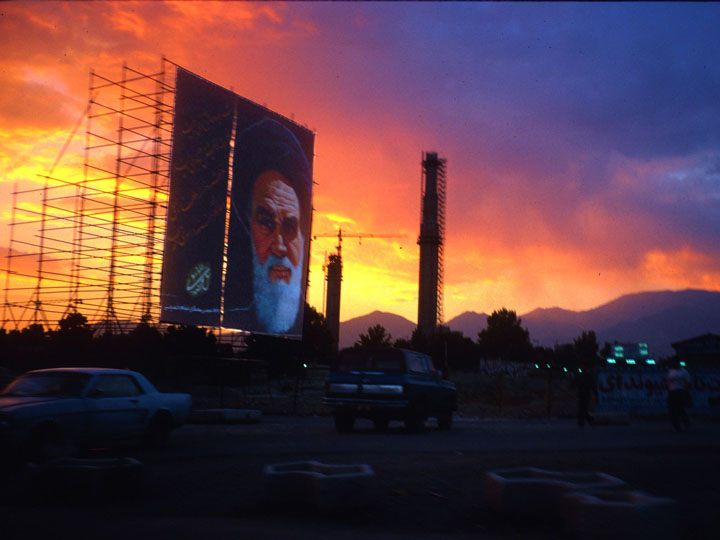 Sunset in Tehran during the then President Khatami’s Dialogue Among Civilizations era. Iran was sanctioned and isolated, but the hospitality bestowed upon me and fellow travelers by ordinary Iranians couldn’t be stifled. ©1999 Derek Henry Flood

New York- Regarding the planned nuclear deal to be reached by late June, Iranian President Hasan Rouhani announced “Today is a day that will remain in the historic memory of the Iranian nation.” Could a statement like this indicate the Islamic Republic is finally falling back into line with the Great Power political order after decades of U.S. estrangement? Possibly. Are there leagues of people who desperately seek to derail such an initiative? Undoubtedly.

Without getting into the granular details of the proposed quid pro quo arrangement whereby Iran will cull centrifuges in exchange for the letting up of sanctions, my angle is how the battle for Tikrit in neighboring Iraq and the coming battle for Mosul factors into this.

Part of what I suspect has changed the decades long game in toxic U.S.-Iran relations is the rise of the Islamic State. President Obama met one of his campaign foreign policy goals by fully withdrawing American military personnel from Iraq (minus those protecting the gargantuan embassy in Baghdad). Guantanamo hasn’t closed and Afghanistan is still festering. Iraq seemed like something of an accomplishment. But when I visited Iraq in mid-2013, it was clear to me that the Pentagon had left behind a fractious mess that was vulnerable to infiltration by non-state groups working to undermine both the Kurds and the then highly divisive Maliki government.

Then we have the twitter-fueled IS takeover of Mosul with a nascent state building to create a salafi-hihadi entity bent on perpetual warfare until an apocalyptic utopia can be achieved. Now as things stand, the Americans and Iranians are working together if purely by default. Notorious militias like the Badr Organization and Asaib Ahl al-Haq have been battling IS with bravado during the siege of Tikrit. Of course, American military planners don’t want to work with Iranian-backed war fighting groups in Iraq. War, however, is not about the ideal. It’s much more often about the pragmatic.

Military planning is constantly a re-evalutation of the lesser of evils on the battlefield. The least worst option always seems better than total defeat. In the Second World War, the Allies partnered with Stalin to defeat the Axis and achieve the near term goals of eradicating fascism from Europe and Pacific. This led to the death of tens of millions of Soviets both in the Red Army on the battlefront and then those who were felled in the Great Terror, Great Purge, ethnic deportations of nationalities collectively accused of Nazi collaboration and the Gulag system. The Cold War and the nuclear arms race immediately followed the Axis defeats.

For the US to preserve what little is has left in Iraq, it will have to work with those it has been fighting in the mid-2000s. This is not to the liking of the Israelis and their vast support network here in the United States. Nor does it please King Salman and the House of Saud who operate in a bizarre realm where the theological and geopolitical are conflated to the detriment of an entire region. In turn the U.S. is supporting the un-imaginitively named Operation Decisive Storm to rout the Houthis in Yemen which sort of proves that the Americans aren’t taking sides in ancient Sunni-Shia fitna. The Israelis and the Saudis have traditionally had a common goal of keeping the Iranians isolated by the U.S. but this paradigm looks to be both shifting as well as no longer sustainable.

I’m not saying the decades of mistrust will suddenly evaporate in a few months time. But the de facto cooperation for lack of a better term on Tikrit may be a prelude to the eradication of IS from Mosul. The Iraqi military simply isn’t up to the task. It has neither the willpower nor the esprit de corps to effectively carry out this mission in my view. One thing endemic to battlefields is that alliances shift with time owing to perceived necessity.