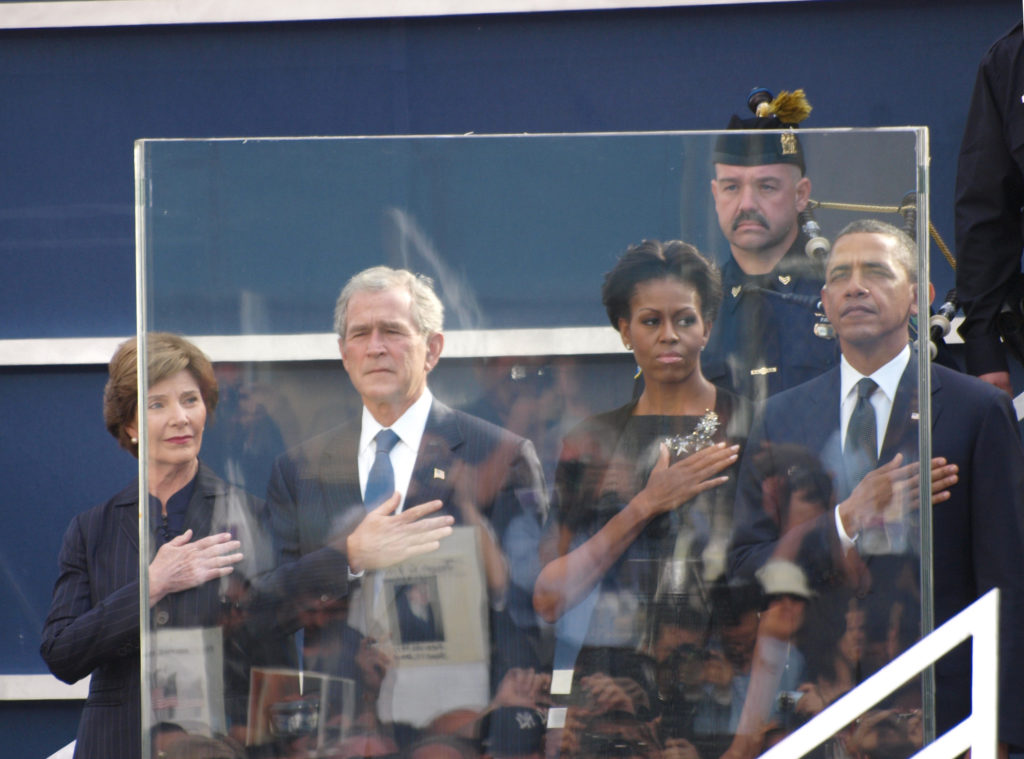 President Barack Obama First Lady Michelle Obama George W. Bush and Laura Bush attend the ceremony in Lower Manhattan to mark the 10th anniversary of 9/11. While the Obamas remained composed throughout the Bush’s displayed visible signs of emotion as the events of 9/11 were recalled. ©2011 Derek Henry Flood

New York- The American political system was dealt what many perceived as a devastating blow last night after years of fitful yet steady progress on a host of domestic and international policy issues. From normalization of relations with Cuba to the decriminalization of certain soft drugs on a state by state basis, many calcified issues held over from other eras have been de-stigmatized which has had the effect of getting US policy more in line with some of its more progressive Western counterparts. On major issues like guns or the death penalty this has not particularly been the case but while I was in the EU this past summer I felt a sense that the US, under years of Obama’s presidency, was more in line with European social norms than at any time in recent history.

The US was no longer viewed as the “hyperpuissance” (hyperpower) as it was derided at the apogee of neoconservative power in 2002-2003.  In short, things had chilled out on either side of the Atlantic. EU member states, with France most notably, had become much more active in exercising the use of military force since the so-called ‘Arab Spring’ took off in late 2010 but more properly early 2011. The amplification of already existing migration routes to the EU helped empower right and far right parties in states like Austria and Hungary that bore the brunt of the second phase of the migration routes from the greater Balkans to Central Europe.

The EU’s own fear of ‘the other’ complex has been both deepening and widening as masses of people storm the gates. To generalize–which carries its own inherent risk–peoples with starkly different views on gender relations, the cultural baggage of dietary restrictions, clothing restrictions for women, and religious traditions that are portrayed as incompatible with the increasingly secular voting populations of member states concerned who want to be seen as open societies within an increasingly borderless world. Those in the West who receive these individuals and families are ill equipped to determine who is a war refugee such as someone from Mosul, who is seeking political asylum such as a resident of Asmara, and those who are traditional economic migrants seeking to remit cash back to their countries of origin while getting a foothold in stable countries such as those from Bangladesh.

Despite the Russian Federation’s entirely illegal annexation of territory in Ukraine and Georgia, the notion of erecting walls and razor wire fences is an antipathy toward the post-war ideals that were fought so hard for and took decades of diligent diplomacy to implement. The ideas so poorly articulated by America’s next commander-in-chief are so far fetched as to be absurd. These next four years will be long, painfully embarrassing, and so chock full of political gaffs that comedians will have their hands full. They may also be marked by increasing radicalization within already marginalized immigrant communities whose communal identities are still reeling from the “with or against” blather that occurred during the onset of the terror wars. Integration is made more difficult when isolation is employed as a tactic in lieu of strategy. These proposed ‘policies’–which are not policies in any real form–cannot work.