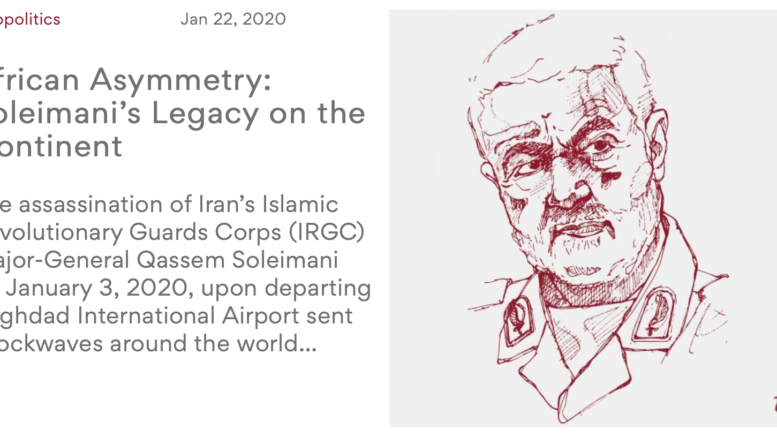 New York- With the extrajudicial assassination of Iran’s Major-General Qassem Soleimani outside Baghdad International Airport last month, I wanted to look at his strategic legacy a bit beyond the obvious headlines in Iraq and Syria. I decided to do a piece for a new all-Africa news portal startup New Africa Daily on his Oods Force’s operations in Africa, with an emphasis on those in a cluster of dilapidated Red Sea littoral states opposite the Arabian Peninsula.

Much has been written of late on the 21st century edition of the ‘scramble for Africa,’ much of it focused on Chinese inroads on the continent. I wanted to look at a lesser discussed player: Iran. For the now the pendulum has swung out of Tehran’s favour as Saudi and Emirati promises and projects have supplanted Iranian aims, particularly since the onset of the Saudi-led intervention in Yemen’s civil-turned-international war.

The so-called ‘Arab axis‘ is currently in ascendance in states where the Qods Forces had been active for years, or in the case of Sudan, decades. The Iranian foothold in Africa’s east has been mostly eviscerated for the time being. But looking at history in terms of decades rather than months, none of this is to indicate things couldn’t possible swing back toward Tehran should another was trigger yet another accompanying geopolitical shift.