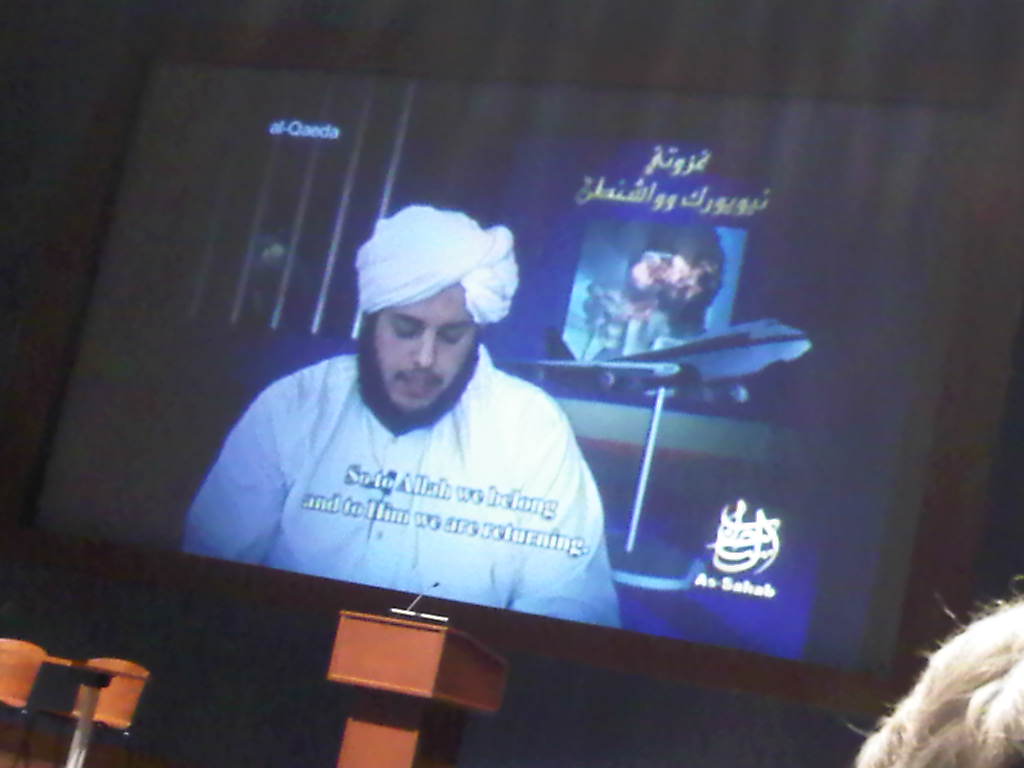 As part of Pape's Powerpoint presentation, he showed four As-Sahab produced videos of the 19 9/11 hijackers including this one of Saudi national Waleed al-Sheri who crashed into the North Tower (along with two of the Pakistani-Britons from 7/7). As I sat in the audience watching them, I wondered how many Americans had ever seen these militant video testimonials.

Washington D.C.- The University of Chicago’s Chicago Project on Security and Terrorism (CPOST) and the New America Foundation hosted a conference in the Capitol’s subterranean auditorium entitled “Cutting the Fuse: Moving Beyond the War on Terror” which was a day-long symposium about the future of the war on terror for lack of a more progressive or nuanced term. It was co-hosted by Steve Clemons of New America and Robert Pape of Chicago. The central presentation was of course Pape’s new book Cutting the Fuse: The Explosion of Global Suicide Terrorism and How to Stop It (the sequel to 2005’s Dying to Win: The Strategic Logic of Suicide Terrorism) and many of the panelists who followed his presentation commented on his theories both positively and negatively. I overall tend to concur with Pape’s overarching thesis on the relationship between suicide attacks and foreign military occupation and I loved Dying to Win for its emphasis on the (for) now-defunct Liberation Tigers of Tamil Eelam (LTTE) who were fighting for an ethnic Tamil homeland carved out of northern and eastern Sri Lanka until they suffered a leadership decapitation with the death of their cultish leader Velupillai Prabhakaran and the LTTE’s subsequent defeat on the battlefield in the spring of 2009 (for further reading on the bloody conclusion of this tragedy, see my piece Sri Lanka: The UN’s “Bloodbath” in Context). Pape makes the important point which is largely lost on a Washington audience because of its perceived utter irrelevance to U.S. foreign policy.

Until the start of the Iraq war in March of 2003, the LTTE, a little understood Marxist Hindu Tamil personality cult operating on the fringe of South Asia’s southern tier, ran the world’s most successful suicide bombing campaign which assassinated two world leaders (former Indian Prime Minister Rajiv Gandhi in 1991 and Sri Lankan President Ranasinghe Premadasa in 1993) in their 26 bloody years on the world stage. In his first book, Pape clearly laid out with the excellent example of the LTTE, that suicide bombing in and of itself is not a phenomenon of global Islamic radicalism. A later panelist, Sahar Aziz, an adjunct law professor at Georgetown and a prominent civil rights attorney made another point I applauded. In what Robert Pape might describe as a minor “Black Swan event” in his new book, Aziz brought up the bizarre case of the suicide attack on the local IRS office in Austin, Texas on February 18 of this year when an deranged man of a European-American Christian background carried out a suicide attack in a single engine plane. The federal government took immediate pains to state that the incident was a criminal act and not one of terrorism while Muslim civil rights groups decried the hypocrisy. Aziz told the audience, correctly in my estimation, that had the attacker had an Arabic name rather than Andrew Joseph Stack III, it would have undoubtedly been immediately and irreversibly classified as a terrorist attack, case closed.

It always make things interesting when people have strong disagreements with other’s ideas in a such a public setting. Kori Schake, a Hoover fellow and former National Security Advisor to the McCain presidential campaign, seemed to still cling to the terribly out of fashion neoconservative idea of remaking the Middle East and adjacent environs with a large military footprint. One of the cornerstones of Pape’s empirical study is that suicide attacks never existed in Afghanistan (with the very particular exception of the Belgian-Tunisian al-Qaeda assassination of Ahmad Shah Masood two days before 9/11), Pakistan (with the exception of the Zawahiri-directed suicide bombing of the Egyptian embassy in Islamabad in 1995), or Iraq before the commencement of the war on terror. The whole concept seemed to be lost on Ms. Schake who seemed to still believe in the “we’re fighting them over there so we don’t have to fight them over here” ideology thereby missing the entire point of the empiricism. Another such one of these was Chicago doctoral student Jenna Jordan’s all numbers presentation on leadership decapitation (the capture or killing of an insurgent leader thereby evaporating the group’s momentum causing it to wither away) and her idea that the eventual death of bin Laden will have a negligible effect on the hoped-for decline of AQ Central. Her idea was immediately attacked by Peter Bergen who cited the bay’at (the oath) the member’s of al-Qaeda’s core swore to bin Laden personally. Bergen emphasized that the oath was not to AQ but to bin Laden personally and if he were to be killed in a drone strike, Bergen believed it would have a devastating effect on the group from which it would be difficult to recover. 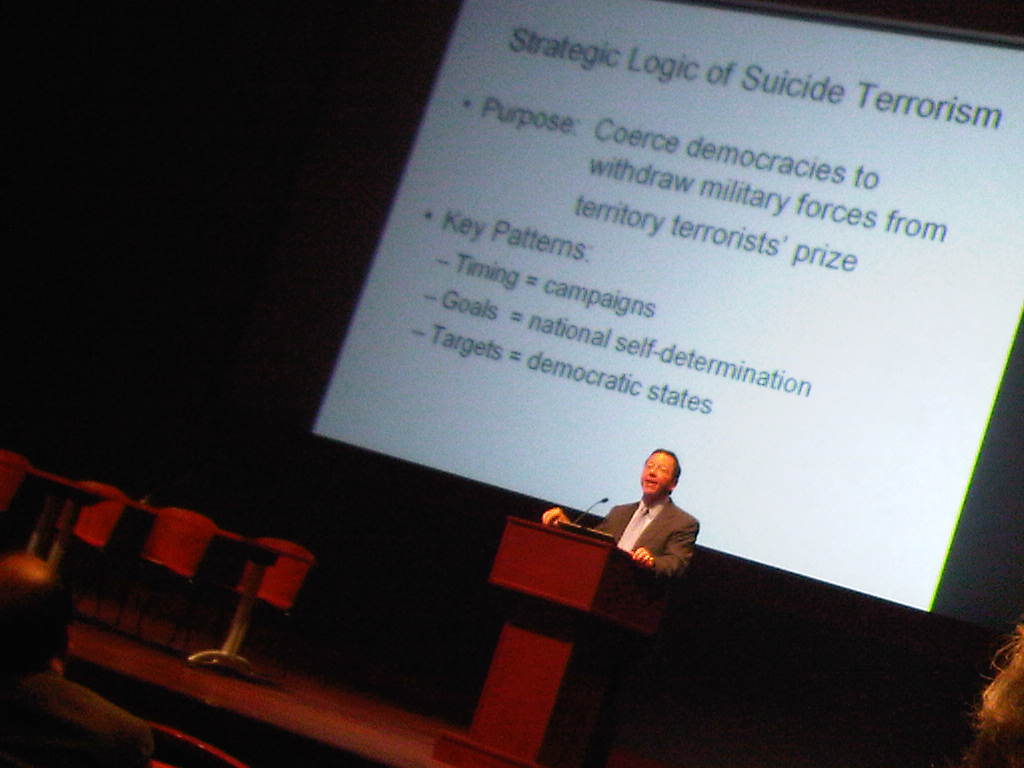 Robert Pape outlines his empirical theory of the effects of military occupation on local populations and the correlation with the rise of suicide terrorism.