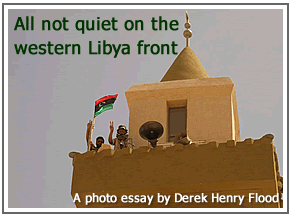 Djerba- I have a photo essay in today’s edition of Asia Times Online on my week spent covering the war in western Libya, arguably the least covered of Libya’s three primary fronts. I was a fascinating time spent amongst a gracious, hearty group of men (there were virtually no women to be seen). In particular I want to thanks Khalid at the Nalut Media Center without whose help I could not have done much of this, and Salah who patiently ran the journo flophouse, whose constant battles to keep the electricity going with that problematic generator will be remembered at least by me. I am grateful for the access the Nalutis afforded me to their under reported side of the Libyan war. It is amazing how cut off one could feel there from the outside world when it was just an hour’s drive from relative normalcy in southeastern Tunisia. The talk of things dramatically tapering off during ramadan does not appear to be the case just a half a day in as Al Jazeera English tweets from a still active frontline.

Qaddafists are still heavily dug in around the town of Tiji and several other places north and east of Ghazaya and Takut. There is much fighting left to do in Libya as Qaddafi still controls much if not most of the Saharan state’s vast territory. One positive (though maybe premature development) I forgot to note the other day was the return of thousands of refugees from Tunisia following the success of the rebels NATO-backed offensive against the GRAD-firing Qaddafists that had previously turned Nalut into a ghost town. When I crossed the border, about 500 cars and trucks filled with women and children, a sight I had quickly become unaccustomed to seeing, were queueing up to cross back into Libya. A couple of men from this massive line helped me get a ride with some oil smugglers all the way to Tatouine for which I am very thankful. That border was the one place in the world where I actually wish there had been a scrum of taxi touts after what seemed like the longest day of my life.