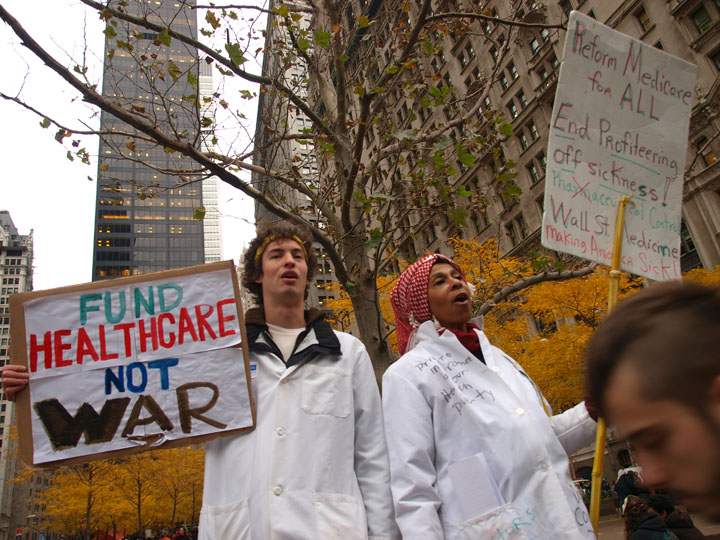 A key message of the Occupy Wall Street movement is bolstering healthcare and social services and cutting back on what many believe is limitless defense spending bolstered by corporate greed. ©2011 Derek Henry Flood

In celebration of “National Freelancers Day,” I present to thee an article that never saw the light of day or the Internet.

New York- On the cold damp morning of November 17, hundreds of protestors marked the two-month anniversary of the birth of the Occupy Wall Street movement. By the day’s end, tens of thousands streamed into Foley Square, an otherwise non descript plaza at the nexus of the city, state, and federal government bodies. Shortly after dawn marchers began their “Day of Action” by attempting to blockade the New York Stock Exchange. 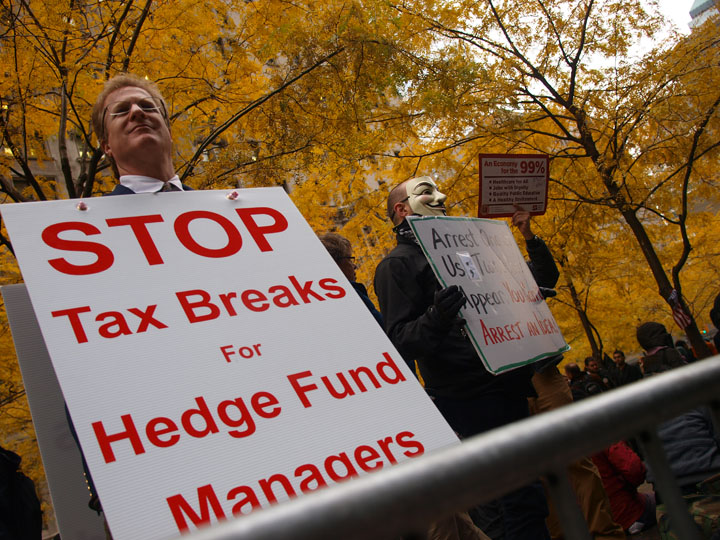 Here a Wall Street portfolio manager seeks not to overturn the American financial system but to curb its worst excesses which many believe led to the current economic crisis gripping the globe. ©2011 Derek Henry Flood

The area surrounding the stock exchange was heavily secured ten years ago following 9/11 when America’s financial institutions were viewed as particularly vulnerable to another terror attack by al-Qaeda. Defiant protestors were summarily hauled away and detained on one of the most security conscious blocks in the United States while a vast maze of aluminum barricades manned by countless members of local police sought to ensure business go on as unhindered as possible. Protestors then reconvened at the now infamous Zuccotti Park, a half acre granite plaza opposite the site of the former and soon to be new World Trade Center. In the very early hours of November 15, police staged a planned raid to forcibly evict protestors who set up camp on the plaza’s pink stone ground. The official line from the city administration and the park’s owner Brookfield Properties, whose chairman John E. Zuccotti is the space’s current namesake, was that the area had to be cleared for its poor sanitary conditions and numerous safety concerns.

A tremendous amount of anger was hurled at the city’s police department who Occupy members view as a containment force determined to defend corporate interests rather serve the people they were sworn to protect. ©2011 Derek Henry Flood

The eviction appeared only to galvanize the larger movement by painting the city’s plutocrat Mayor Michael R. Bloomberg as a defender of the rights of corporations over freedom of expression and assembly guaranteed by the American constitution. The day went from small scale fits of violence between protestors and police to a festive atmosphere by nightfall as the Occupy movement was reenergized by what local police estimates estimated to be 32,000 demonstrators. 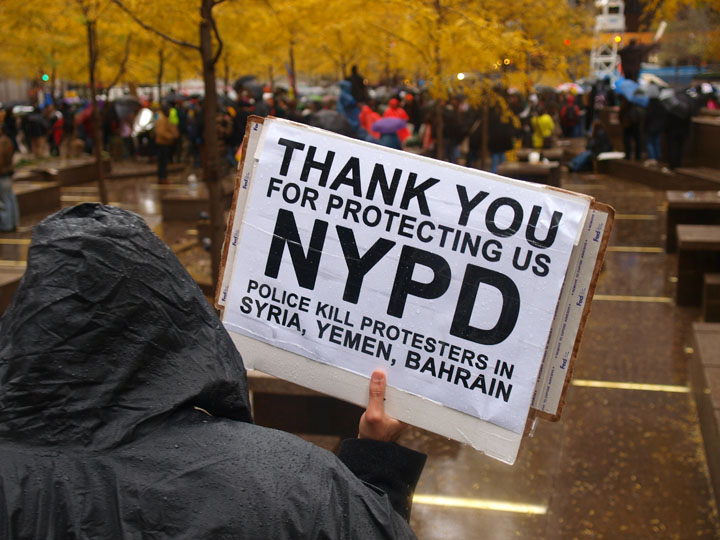 The New York Police Department insists it is operating in such large numbers in lower Manhattan in order to “protect” protestors. Here an Occupy member, mindful of the atrocities of the Arab Spring, displays his cynicism toward such purported rationales despite the rain and bitter cold. ©2011 Derek Henry Flood

Of the many criticisms of the amorphous Occupy movement, that most oft repeated is that it is a fissiparous shouting match whose only common thread is a shared, incoherent seeming rage. To be sure, the messages being hurled by the Occupy movement are many but that merely reflects the diversity of voices in a growing class of disenfranchised Americans affected by an economic crisis that has either denied them opportunity or sucked the oxygen out of their middle class standing. Though an element at Zuccotti Park clearly seeks to simply taunt the city’s police, themselves a hulking blue collar work force, the massive marches which culminated in a rally at the steps of Manhattan’s court complex displayed the Occupy movement’s overarching, more articulate strains. 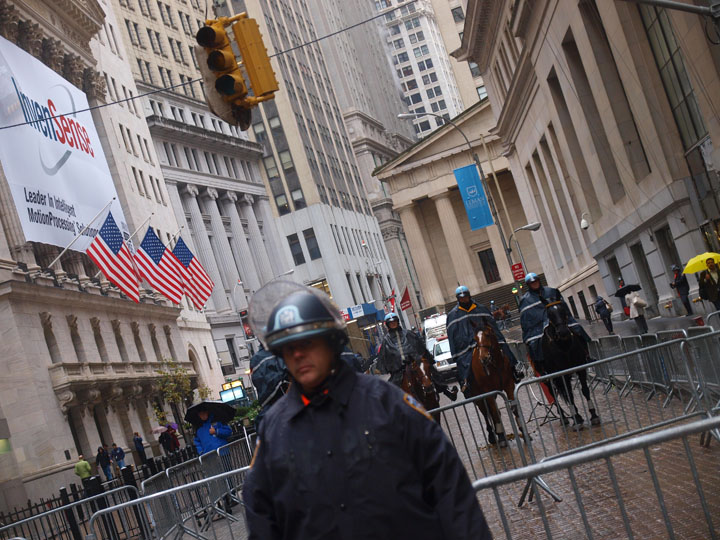 Several of the country’s most powerful labor unions delivered thousands of demonstrators in support of Occupy Wall Street. City authorities did not have the liberty of describing such a large display of solidarity as a small group of troublemakers in soiled tents. Demonstrators took cues from more successful global people power movements in the European Union and the Arab World with placards in several languages. The viewed themselves not as citizens of a veritable island nation safeguarded by two oceans but as victims of a sort of globalized economic pillaging that integrated American with the rest of the world’s oppressed peoples. Messages ranged from the traditional union sentiments of wage and class preservation to more radical anti-capitalist memes that seek to graft some form of democratic socialism onto American society. Much of the anger was directed at Mayor Bloomberg personally. 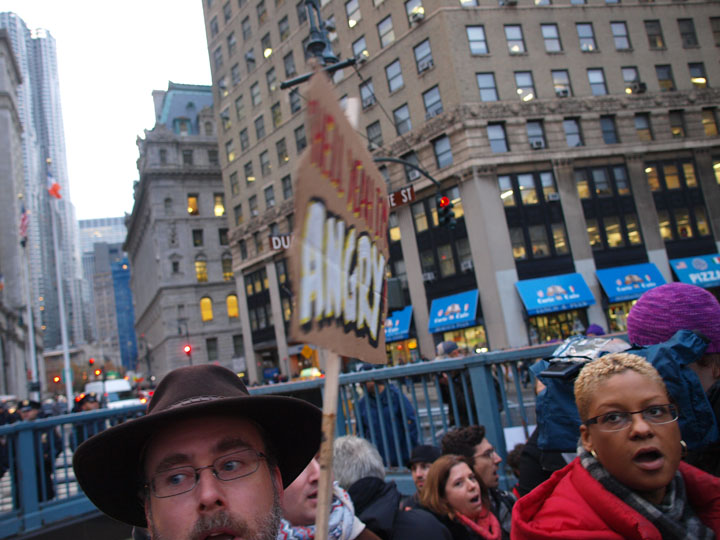 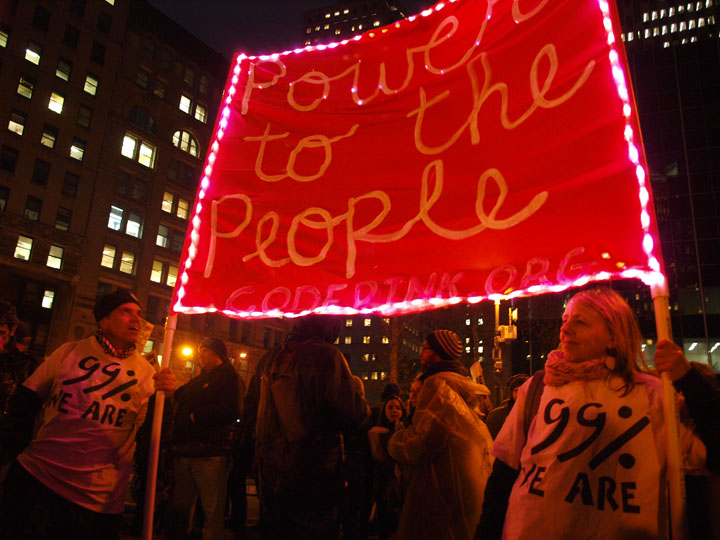 The Occupy movement has helped to resurrect the concept of ‘people power’ popularized in late 1960s back to the fore of American politics. Though the Occupy Wall Street movement is generally anti-war as one component of its outlook, the anti-war sentiment is most often framed in terms of economics rather than resistance to foreign military adventures solely due to ethical concerns. ©2011 Derek Henry Flood

For those rallying in the streets of New York, Bloomberg is the embodiment of everything they are attempting to overturn. The world’s 30th richest man used his immense wealth to become the city’s three term mayor while sitting atop a media and business technology empire that continues to accrue him further wealth at what appears to be a Malthusian growth rate. Bloomberg often could barely mask his disdain for the Occupy movement blighting the otherwise tourist friendly financial district, struggling to be polite at press conferences explaining his decision making process aimed at handicapping the Occupiers. In another earlier era devoid of nuisances like social media and smart phones, a disproportionately powerful big city mayor would have had an easier go of simply crushing a protest movement with brute force without batting an eye. 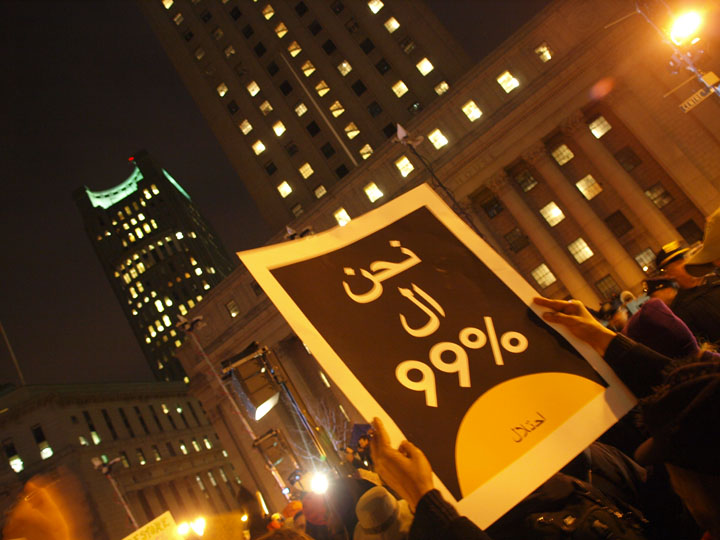 A protestor marches in Foley Square with an Arabic language placard stating: “we are the 99%.” The tenaciousness of protestors in Tunis, Cairo and Sana’a has helped to embolden their Western counterparts as a sense of mass dissatisfaction among the world’s youth population genuinely goes global. ©2011 Derek Henry Flood

The protestors in New York, around the United States, and several European Union capitals seek to end the confluence of corporate citizenry and big money politics that Bloomberg and those he has a naked interest in protecting epitomize. Calling for limits on wealth, the biggest anathema in a no limits, free market capitalist system that traditionally rewards race-to-the-bottom economics, is a demand made by protestors of every imaginable demographic. Such a call only a few years ago would have been instantaneously dismissed as a fringe notion. It has taken on real traction among a generation that feels they have been deprived of an economically sustainable future in a legalized Ponzi scheme writ large.

One of the principal drivers of the Occupy movement in the United States is the economic evisceration of its greatly weakened middle class at the expense of a small, fabulously wealthy minority whom the protestors mock as the “1%.” ©2011 Derek Henry Flood

Mayor Bloomberg’s aggressive eviction of the encampment at Zuccotti Park has only hardened views on either side and provided OWS a new slogan with which to rally around: “You can’t evict an idea whose time has come.” Employing New York’s public servants as proletarian enforcers of corporate power will unlikely have the all-powerful mayor’s desired effect of simply claiming to be maintaining democratic law and order. The Occupiers had been an unsightly blemish on the belated post-9/11 rejuvenation of lower Manhattan’s Financial District in the view of the real estate barons who seek to transform the area into yet one more playground for the extremely wealthy in New York City. For a time the tent squatters even became a tourist attraction due to the camp’s proximity to the new World Trade Center site. Bloomberg no doubt viewed the swift night raid to destroy the protest camp as one more of his pragmatic gestures designed to uphold the city’s stiffening health and safety codes his administration have held as a priority. But the rubbishing of Zuccotti Park will have to opposite effect in light of its profound symbolism. In the twilight of his 12 years in office, Michael Bloomberg’s city-state will not collapse overnight like a fractious southern European coalition government, but it may fade into history with its legacy more muddled and tarnished in the billionaire mayor’s final act. 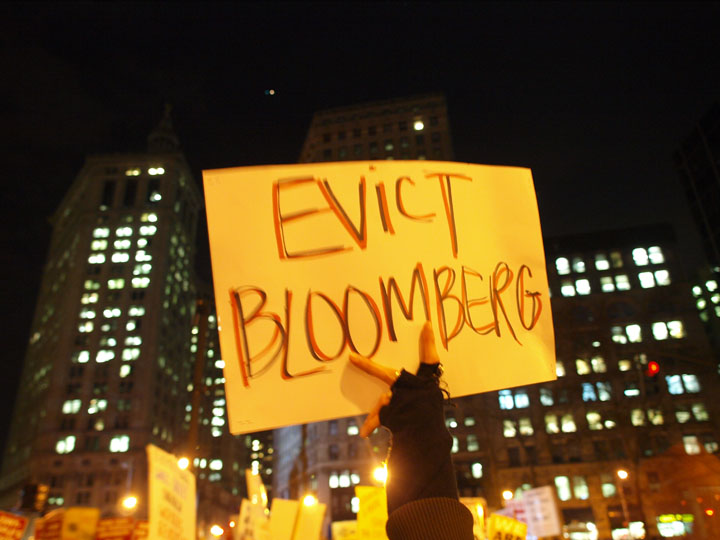 Much of the rage vented on Occupy Wall Street’s November 17 “Day of Action” was personally directed at the city’s mayor who is worth an estimated $19.5 billion USD. Bloomberg stated that the ultimate decision to aggressively evict protestors from Zuccotti Park on November 15 “was mine and mine alone.” ©2011 Derek Henry Flood