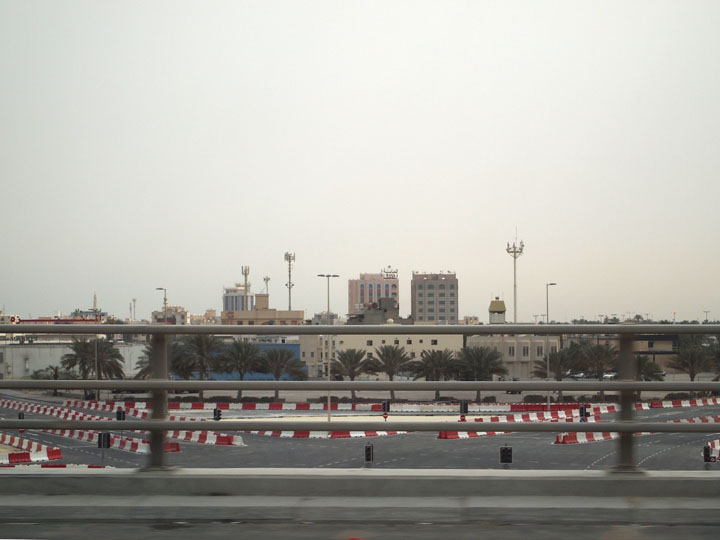 Whizzing by the demolished, cordoned off former site of the Pearl Roundabout in Manama's financial district on April 3, 2011. Photography in the area was banned and this shot was all I could get. ©2011 Derek Henry Flood.

New York- On April 2-3, 2011, I traveled to Manama, Bahrain for a fleeting 24 hours to get a glimpse into the island kingdom’s crushed revolution. I was only allowed out of the airport after a friend who works as a junior diplomat at the American embassy there came to my rescue. The Pearl Roundabout, whose eponymous sculpture had been torn down on March 18, was forbidden to both visit and photograph by the time I arrived. The area, in the heart of the island’s steaming hot capital, had become a closed militarized zone upon my visit. My ruse to visit the area was to take a taxi to the adjacent fish souq manned by South Indians and Bangladeshis. The authorities quickly caught on however and the jig was up. In a taxi on the way to the souq, the driver had mentioned off handedly that a local coin had been taken out of circulation because it simply depicted the vanished Pearl sculpture. I went to a number of businesses in Manama trying desperately to get my hands on one of the verboten coins thinking surely it would still exist as change in someone’s cash register. I asked at the coffee shop that I darted into while trying to evade the Bahraini police. Nope. Then the Carrefour, then the Virgin store and so forth. All of the salespeople told me they had been instructed to rubbish the Pearl coins when they received them as payment. I quickly realized I would only be able to score one once outside the country. 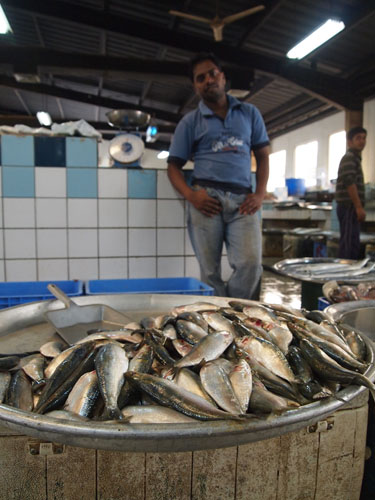 The South Asian fish souq mongers in downtown Manama, pawns in my not so elaborate ruse to get to the former site of the Pearl Monument. ©2011 Derek Henry Flood

My way of exacting revenge was via Ebay. As soon as I reached New York at the end of that trip, my first order to business was to track down the banned 500 fils coin depicting the Pearl Monument. The coin took quite some time to arrive but I finally got my hands on the prize (from every conflict I collect recently or soon-to-be defunct currencies like the Taliban afghani, the Saddam dinar etc).

The Bahraini uprising began sadly a year ago today. The grievances have been stifled by the ham-fisted policies of the government there and its big brother in neighboring Saudi Arabia. The United States has not only callously failed to act there, wary of losing its military lookout facing Iran (ie the 5th fleet) but has also been debating buttressing the regime was a massive weapons deal disproportionate to the kingdom’s tiny size and populace. While the infamous $53 million arms deal sits in limbo, a smaller $1 million arrangement has been allowed to go forward according to Human Rights Watch. Bahrain is a travesty in part because it is simply allowed to go on. The monarchy continues to suppress calls for both moderate reform and those more radical for its overthrow and the conversion of Bahrain into a representative democracy. Joshua Landis, the author of Syria Comment, referred to the regime of Bashar al-Assad as “the last minoritarian regime in the Levant” who is “destined to fall in this age of popular revolt”.

In the Persian (or Arabian) Gulf however, sits yet another minoritarian regime, that of King Hamad bin Isa Al Khalifa. The Hamad government has been described as destined to fall by no one unless there is a statement by Hassan Nasrallah or some ayatollah in Qom I’m unaware of. America’s clumsy, lopsided policy when it comes to Bahrain is then easily exploited by those who did not want to see Qaddafi fall and seek to uphold Assad at least rhetorically because of their deeply ingrained anti-American worldview. Amidst all of this nonsense, in the towns and villages outside the once glitzy capital of Bahrain, it is the Shia civilians there that continue to suffer. 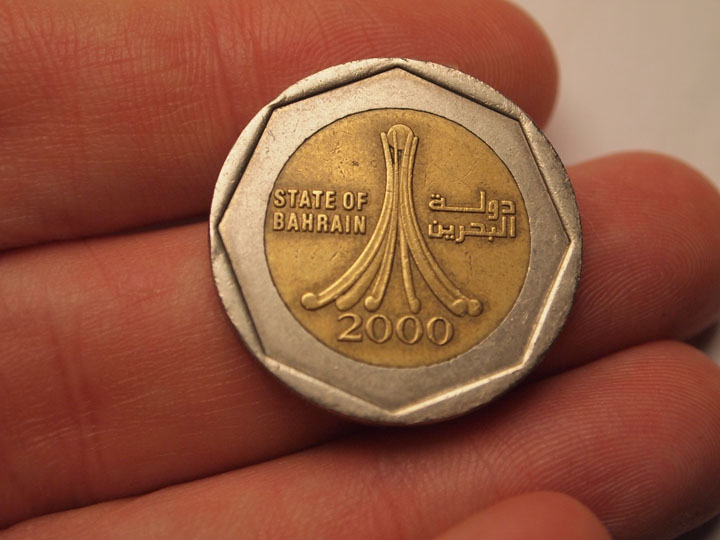 ← Halfway Around the World
The End of Bashar, Hizb-ul-Ba’ath, and the Unraveling of Arab Socialism →