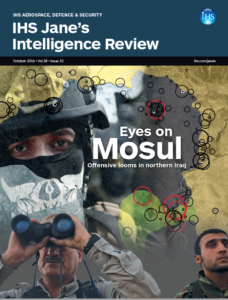 New York- I am proud to mention that I have the cover story of the October issue of Jane’s Intelligence Review entitled “Eyes on Mosul: Offensive Looms in Northern Iraq.” With each of the reporting trips I’ve made to Iraq over the years, the broken republic is in a higher phase of devolution from a centralised state to nearly discrete territories held by rivalrous groups adhering to identity-based ideologies each incompatible with the next.

During my previous trip in 2013, the smoke was on the horizon. IS was still a localised insurgent movement with a primarily regional agenda before it evolved into a transnational movement as it metastisised in neighbouring Syria. In its earlier stage, IS collaborated and even cooperated with other anti-government and anti-Kurdish groups along the ‘Green Line’ that has separated Kurdish-majority governorates and disputed districts in northern Iraq with so-called ‘Arab’ Iraq.

Reminding me somewhat of the LTTE in the early phases of their separatist war in northern Sri Lanka in the 1980s, one by one IS pushed aside, intimidated or eliminated peer competitors within its hyper violent action space.  IS seeks to be the sole non-state actor (or proto-state actor by its own macabre narrative) in the areas it administers. In intense contrast, the armed groups arrayed around Mosul are virtually all involved in peer competition be ethnic, sectarian, inter-reglious, intra-Kurdish and so forth. This does not bode well for attempting to govern a post-IS Ninewa. 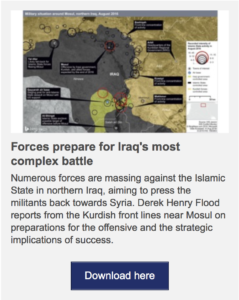 Where this dangerous dynamic works in the ad hoc coalition’s favour is that IS has no allies to fall back on. Despite losses of a number of major towns and cities, the salafi-jihadis still control a vast, though shrinking, territory. But it does not have a web of local alliances after over two years of unrelenting brutality. Nor does it have safe mountain redoubts nor an outlet to the sea. The encirclement of the group has only grown while a litany of air strikes have put them under immense pressure.

Although Iraqi Prime Minister Haider al-Abadi has made numerous pronouncements about the recapture of Mosul by the end of this year which would signify the defeat of IS in Iraq in his own words, there is still a long way to go and there is still not agreement about how Iraq’s second largest city will be rebuilt much less run.

Al-Abadi tweeted from the UN General Assembly in New York this week that an offensive to recapture the ancient Assyrian town of al-Shirqat was underway which is the last major IS stronghold in Salah-ad-Din Governorate. Then there is conundrum of Hawija in nearby Kirkuk Governorate which I saw coming in 2013 after the protest camp there was so violently dispersed fueling the fire of Sunni Arab discontent which allowed for the IS takeover in June 2014.

Though it wrought massive environmental degradation with the IS retreat, Qayyara was successfully retaken by ISF and its local allies after a prolonged stalemate along the Tigris. Much remains to be seen. I and much of the interested world will be staying tuned to see how the rest of the year plays out militarily in Ninewa. 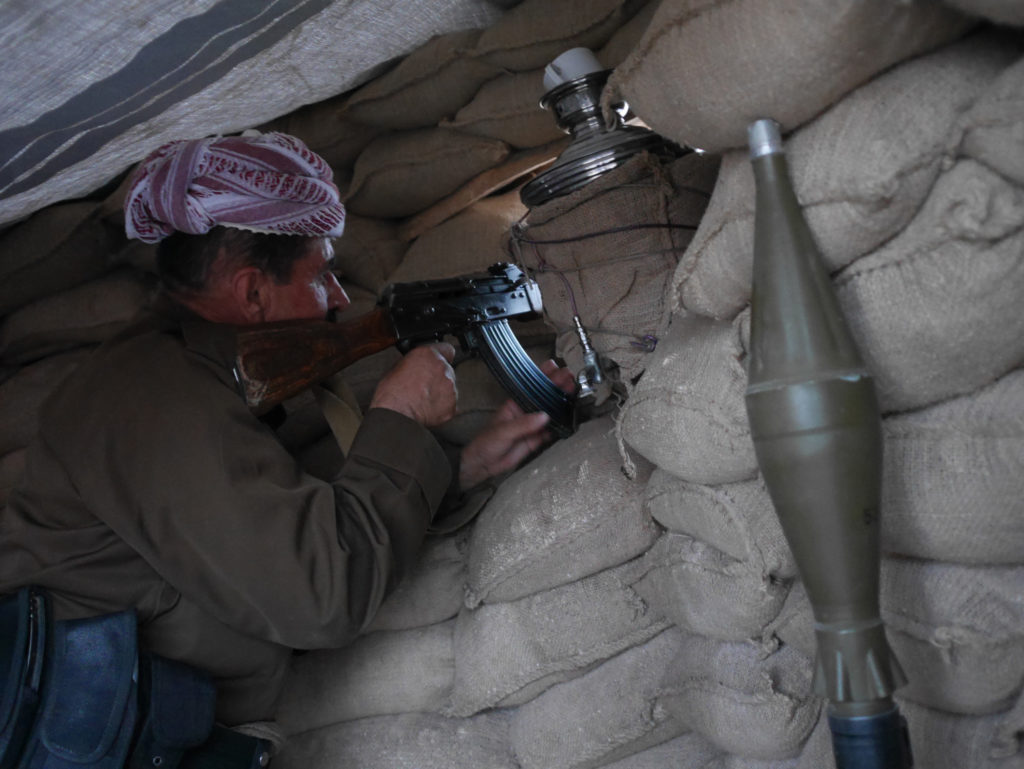 A peshmerga soldier takes up a position after an IS sniper attack from the valley below in a tiny sandbagged position called Lufa. ©2016 Derek Henry Flood