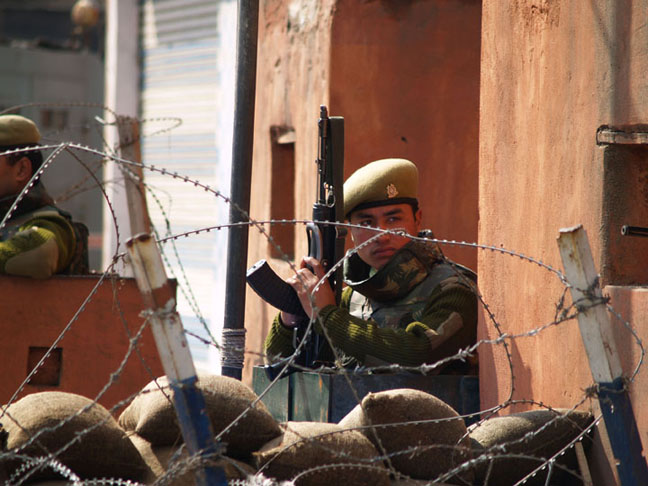 I came to Indian-occupied Kashmir in the context of a larger trip around South Asia to document the fraying edges of the much-hyped Indian ascendancy that I’d been hearing about ad nauseam in the American media over that last few years. Kashmir status has been in political limbo since the day India and Pakistan parted ways in 1947.  Its been in state of violent upheaval since a nationalist uprising began in 1989. Kashmir had been looming in my imagination since visiting the Pakistani side of the story as a wandering university student. It’s rare for Kashmir to make it in the headlines these days outside of talk about a peace deal between South Asia’s fratricidal nuclear rivals. To many, it has become a geopolitical afterthought.

After networking in Srinagar for a few days, I was befriended by a group of local photojournalists who let me into their lives for an all too brief two-week stay. In the heart of the city’s “new” district lay the press colony where every morning photographers gather to disseminate information on events related to the conflict, have a tea, or talk politics of the American-led “war on terror” with a random American in their midst.  Aside from the 2005 earthquake, Kashmir has largely fallen into the abyss in the US in the shadow of the media’s obsessive Iraq coverage. But there is one international figure who hasn’t forgotten the plight of the Kashmiris. Dr. Ayman al-Zawahiri, described as al-Qaeda’s #2 man, still mentions the Himalayan conflict in his taped messages regularly airing on al-Jazeera.  Kashmir was but one struggle as part of a broader theme in the Muslim world against occupation by non-Muslim powers like India in the worldview of pan-Islamic terrorists. I wanted to get a small window in the struggle that’s been burning in the Kashmir Valley for eighteen years.

My opportunity came knocking loudly one day on what became my routine stop by the press colony. There were going to be especially violent protests outside the main mosque in the Old City when Friday prayers let out into the streets. There had been exaggerated stories circulating in Srinagar that the Israeli government was preparing to demolish Jerusalem’s fabled al-Aqsa mosque in an attempt to devastate Islam’s presence in the holy city. What disturbed me was not that a bunch of stone throwing boys would be enraged by these stories but rather that many of the local journalists, who had never traveled out of their own region, also believed this to be the case. This put me on the spot ethically as I was the only non-local journalist with international experience. I tried, perhaps in vein, to spread the idea that what was being told in the mosques was not accurate and feared people could be killed as a result. It was as if what I was trying to convey was far too nuanced for a situation already in a state of hyper volatility. I was screaming at a wall.

But it was too late for any of that. I jumped in a rickshaw and throttled across town to the doorway of the massive Jamia Masjid in the old city’s Nowhatta neighborhood. I could feel the imam’s sermon pulsing with rage and tried to mentally prepare myself that trouble would break out at any moment. Indian police milled about at the entrance to the mosque grounds almost as if to invite trouble. A police commander approached a German journalist I had run into and politely asked the two of us to leave the area. It was “no longer safe for tourists”. The German scoffed while I questioned the legality of an Indian officer’s authority in this brutally disputed territory. Then stones, bricks and anything else that could be hurled began to reign down en masse onto the poorly equipped security forces. The police, whose line I was well advised to stay behind, fired teargas shells at a very heated crowd of teenage boys. When that didn’t have the desired effect, they began to lob shock grenades across the no-man’s land between the two groups. What could have been a protest was essentially an orchestrated riot. The security forces appeared at once fearful and cruelly childish. I ran up the street, darting from side to side hiding behind oil drums, lampposts and turbaned Sikh policemen. Rather than acting in concert by clearing and holding ground and being otherwise professional in any respect, the officers began to angrily throw debris back at the crowd. The basic tenets of crowd control were lost here. With most of them lacking proper protective equipment, they would make the occasional surge across the line getting just close enough to give the rioters a good scare. One side yelled slogans of “long live Pakistan” while the other just simply yelled and I was in the middle in every conceivable way. One of the local photographers named Tariq had taken a blow to his skull from a piece of red brick and has disappeared from my field of view.

I ran into an alleyway across from the mosque where I huddled with a group of cowering policeman. It appeared they had lost whatever ground they held and we could hear the youths closing in. Rocks began to ricochet into the alley. Our brief safe quarter was about to be breached and I gestured to the men in the shadows that they’d better confront the most aggressive or we would all be smashed.  Each constable grabbed a rock and made a mad dash toward the opposite side. I ran behind them trying photograph and was hit by teargas that had been thrown back toward the police. I sprinted down another alley and into the courtyard of a home adjacent the mosque. A Kashmiri man came out from the doorway and turned on a spigot for me to wash my eyes. I graciously thanked him and took a moment to breathe. After about three hours of non-stop chaos, I decided I’d had enough.

When the smoke cleared, I encountered a young Kashmiri man named Hilal who had just returned from exile in Australia to lend his help to the nationalist resistance and to work in human rights. I asked Hilal how often this type of civil violence occurred in Srinagar. “Every week” he said. “But this week, especially bad”.