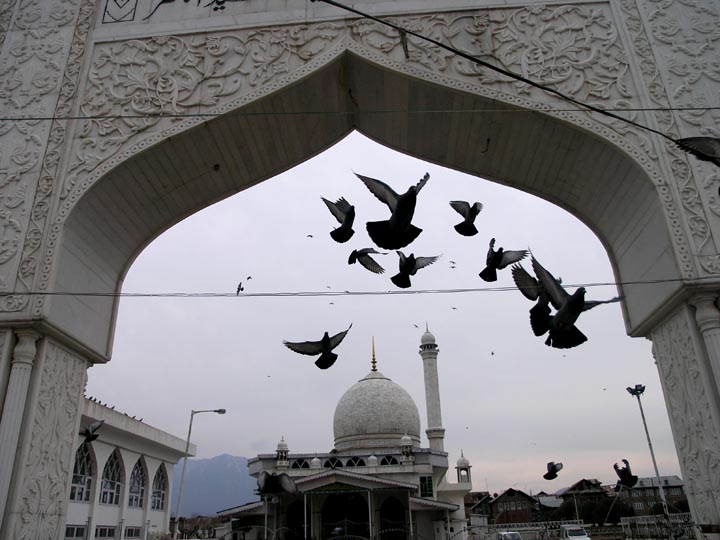 The Hazrat Bal shrine on Dal lake in Srinagar. According to Shadow War by Arif Jamal, a temporary theft of the Prophet's hair relic from Hazrat Bal is what helped to ignite the still ongoing insurgency in the Kashmir Valley. ©2007 Derek Henry Flood

New York- I attended an event at Asia Society in New York last Thursday called India and Pakistan: Back from the Brink? that dealt largely with the never ending fight over Kashmir. From India was C. Raja Mohan, author of Crossing the Rubicon: The Shaping of India’s New Foreign Policy and current Kissenger Chair at the Library of Congress.  From Pakistan was Dr. Adil Najam, professor of International Relations at Boston University. No one from the other major stakeholder, China (with its own slice of occupied Kashmir called Aksai Chin) was present nor was there a Kashmiri to represent the people of Kashmir save for an audience member who spoke up. The event was moderated by Briton Robert Templer from the International Crisis Group. Raja Mohan explained to the audience that the Musharraf years between 2004-2007 were more productive toward a modicum of Indo-Pak peace than the sum of foreign relations in the previous four decades. All of this was derailed by the end of Musharraf’s one-man, rather unipolar military-civilian government, and of course the vile Mumbai terror attack in late November of 2008. Mohan said that the post-Musharraf power structure in Islamabad had complicated things in that the Singh government was now dealing with a Kayani-Zardari-Gilani troika rather than just talking to and dealing with one man as it had done for years with General Pervez Musharraf. 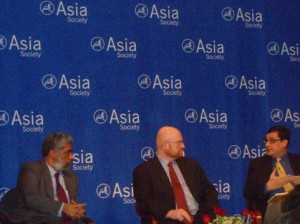 With the prospect of a getting a peace process back on track, Mohan said that such a process must be able withstand pressure from the spoilers. That is to say if Lashkar-e-Tayyba or another Pakistani terror group launches a large scale attack on the Indian heartland, that peace talks will not automatically be turned off at the tap in response. Doing so would hand another victory to those waging asymmetrical warfare/mass murder in South Asia. Adil Najam stated that he was more of an optimist than a realist when considering territorial disputes between India and Pakistan in a broader context. Najam is hopeful that by working on the Sir Creek dispute on the Arabian Sea and the Siachen glacier dispute on the Chinese frontier abutting the Chinese-controlled Shaksgam valley, the larger Kashmir dispute can be talked about more amicably if the less ideologically and emotionally-based conflicts can be settled peacefully. Najam believes there is currently a viable window open for the two primary players to work on the Kashmir dispute but that this window will not last and must be taken advantage of in the near term. Mohan said the Indians were unclear if Musharraf’s policies on Kashmir had been grandfathered in by the current Chief of Army Staff General Ashfaq Kayani and were therefore not sure of some of the parameters for discussion with their Himalayan opponent. On the subject of cross border terrorism, often Delhi’s biggest contention, Najam said that Pakistan will reign in terror groups when it realizes it is in its own interest to do so rather than as a component of Indian demands (that may further bruise Pakistan’s battered ego). Mohan concluded that Kashmir and the other disputes between India and Pakistan (he left out poor Bangladesh) are more of a post-1947 South Asian civil war stemming from the massive internecine partition than a classic war in the international sense. 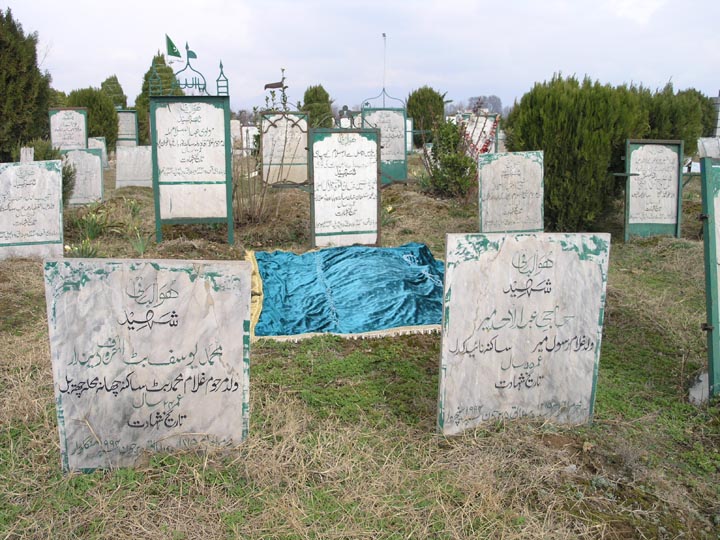 A martyr's cemetery on the outskirts of Srinagar where exhumed bodies from so-called "fake encounters" are reburied. Fake encounters amount to what local human rights groups claim are the killing of innocent Kashmiri civilians by Indian security forces and posthumously labeling them "Pakistani militants" in order to justify their ongoing military occupation of the region. ©2007 Derek Henry Flood