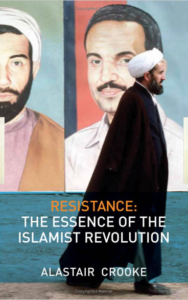 I attended an event with Alastair Crooke, author of Resistance: The Essence of the Islamist Revolution and veteran EU Middle East diplomat at the New America Foundation here in Washington. The event was webcast on the The Washington Note and Crooke’s presentation was little short of spellbinding. Flanked by Amjad Atallah and Daniel Levy from NA’s Middle East Task Force, Crooke took the audience through the rise of modern political Islam in the late twentieth century beginning with the earthquake of Imam Khomeni’s revolution up until the present. In a thorough bit of comparative historical analysis, he wove the narrative of the pairing of an evolving Protestant Reformation in the heart of what would become modern Europe with Enlightenment capitalism and the invisible hand. This pairing according to Crooke, led to the rise of the Western notion of strong individualism which would later clash with Islam’s concepts of communitarian social equity and justice. The invisible hand was meant to maximize human, and therefore individual, wealth. Combined with a belief in the “spontaneous natural order of the body politic” spurred by competitiveness would form the two pillars of modernity that would bring Islamic societies to near extinction with the rise of the (Westphalian) nation state and attendant human rights.

According to Crooke, “powerful, unitary nation-states were necessary to create economic markets.” Thus with the dismemberment of the Ottoman Empire came a modern dark age for traditional Islamic societies. Western Europe’s Sykes-Picot version of the Middle East, creating definable state borders with centrifugal client leadership (and subsequent dependent economies) was devastating to regional cultural order. Using the rise of Kemalism in Turkey as a prime example, Crooke noted the Armenian Genocide and the state orchestrated oppression of Kurds as “Mountain Turks” and transfer of the indigenous Greek population as an enormously destructive result of revolutionizing Turkey from a fluid multi-ethnic empire to a monolithic market-state modeled after Western Europe.

In the aftermath of the Great War, simultaneously, Marxism was attacking Islamist ideology from the bottom up squeezing religion out of the political space as revolutionary communism mimetically competed with branded Western capitalism throughout most of the twentieth century, much of it through imperial or neo-imperial enterprise. Genuine political Islam says that “social justice must be subordinate to markets” making it diametrically opposed to the “two pillars of modernity” mentioned above. Crooke mentioned that what most in the West consider “revolutionary” Islam is in fact a counterrevolutionary brand of the faith’s implementation of politics. Islam’s counterrevolution is “dogmatic and anti-heterodox”. The West has used this form of Islamism in it’s containment strategies of “Nasserism, Marxism, Shi’ism, and Soviet Communism” to name several.

Containment strategies in their inherent quality are by and large a short term, ill conceived methodology that often give birth to larger, less reconcilable quagmires. The Muslim Brotherhood in Egypt and the mujahideen in 1980’s Afghanistan are examples of this flawed policy. Amjad Atallah noted that U.S. policy in Cold War Afghanistan didn’t differentiate between sponsoring Gulbuddin Hekmatyar’s Hizb-i-Islami and Ahmad Shah Masood’s Jamiat-i-Islami and even encouraged the more virulent ideology of the former rather than the more pragmatic Islamism of the latter.

The West, he said, ends up on the wrong side (of history) with its policies and actions (that are reinforced) with its own dogma and literalism. Having Nuri al-Maliki, a Shia (read: apostate) on the “throne” in Baghdad, the seat of Abassid glory, is akin to Hulagu’s sacking of the city’s ancient incarnation in the twelfth century and heretical Mongol siege of the city in the eyes of Salafis.

Speaking on the transformational ascendency of Hassan Nasrallah across the breadth of the Middle East among Sunni and Shi’i alike, Crooke said “If you want to get a taxi quickly to the airport in Doha, wait until Nasrallah gives a televised speech”. Nasrallah’s charisma breaching entrenched social and doctrinal boundaries in part highlights the struggle for the future of the whole region within the Middle East’s competing indigenous ideologies since the era of classic great power competition in the Middle East has ended and a new era of affinities both regional and imported, rather than hardened alliances, has been ushered in.