Kuala Lumpur- I’m finally done after two weeks here in KL, much more time than I intended on spending and well worth it. I’ve been researching about the January 2000 AQ summit in the suburbs and a few other things I’ve been snooping around about. I spent the last two days at the towers, which are called KLCC (Kuala Lumpur City Centre) in local parlance contemplating, or imagining, what 9/11 hijackers Khalid al-Mihdhar and Nawaf al-Hazmi might have thought of them when they arrived here to plan 9/11. I’m working on a story about it but it’s a bit on the abstract side. Hopefully it will work. Malaysia has its twin towers where office workers relax on their lunch breaks, children play, and tourists from all over the globe take happy photos for their facebook accounts. There was once a place in New York where all of those things used occur. New York however, does not have its. Only ghosts and unanswered questions loom over Manhattan. Malaysia was a critical logistical hub for al-Qaeda on Lawrence Wright’s road to 9/11. Ten years ago, in the shadow of one set of twin towers, a plan was forged to destroy another 12 time zones away. 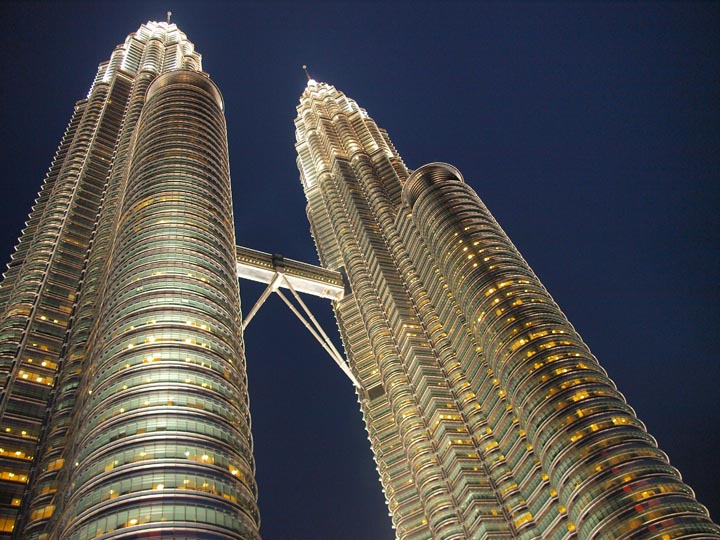 The twin towers at dark loom above the KL skyline incongruously like express elevators to alien ships that have yet to dock. ©2010 Derek Henry Flood

A shop near the twin towers sells mini metal replicas to tourists passing by with their Islamically correct architecture. ©2010 Derek Henry Flood.

← Random Notes From the KL Underground
One Night in Singapore →