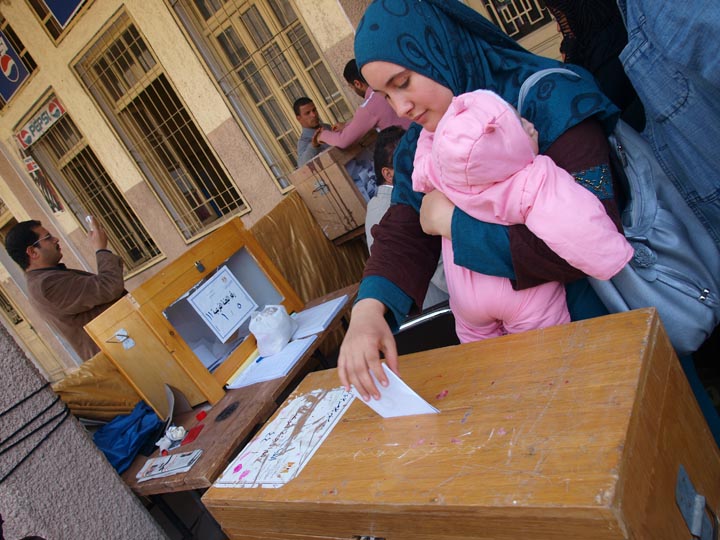 Mother and child vote at an Italian catholic school here in central Alexandria. Never to early or too late to learn to vote! ©2011 Derek Henry Flood

Alexandria- Had an exhausting, thrilling day covering the constitutional/presidential referendum here in Egypt today. It was a bit exhausting as I used the old heel-toe express to get around. It was amazing to see so many people genuinely psyched to vote for the first time in their lives and be so happy about it. Unlike every other vote I’ve covered in the past few years, this was not really amidst violence or war (Pakistan, Afghanistan, Kyrgyzstan). I took a headlong dive into Egyptian NDP/MB/everybody else clamoring for a voice-politics.

I used my Libyan rebel press pass issued in Benghazi to talk my way into 3 out of the 4 polling centers I walked to around the city, and got very different reactions at each one. Their is still a strong tendency by the authorities here to try to control situations in a knee jerk fashion but today was a day for the people. At the first polling place, which a tiny, elderly southern Italian woman brought me to (long story!), the commanding police officer out front said, “have at it!” My receptions were slightly icier at the other 3 places but still, it was amazing to walk around, shoot photos, and interview people to my heart’s content without fearing for my life.

In other news, I did an interview about the Security Council’s Libya resolution via Skype last night with my Jamestown colleague Erica Marat for Voice of America’s Russian service. Here in the link.

Put the ballot in the box. No more Mubarak! ©2011 Derek Henry Flood

← In Revolutionary North Africa
“City of the Living!” →