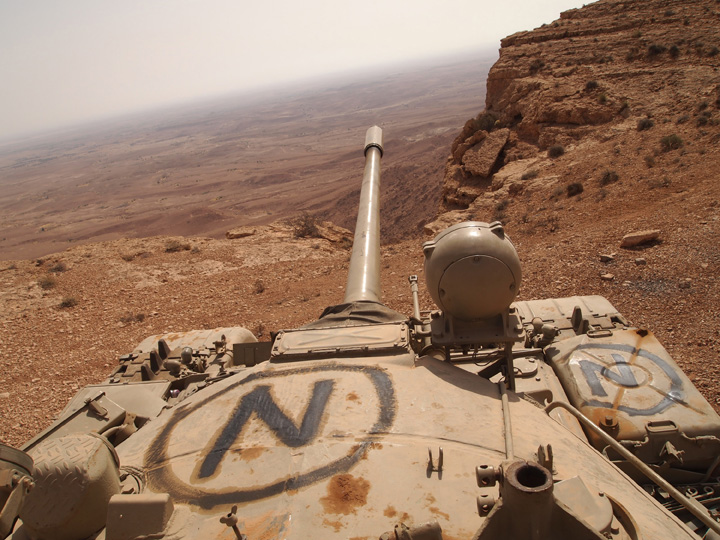 An ageing Soviet tank is ensonced near a rebel position on an outcropping on the outskirts of Nalut where it is aimed at a Qaddafist camp in the desert below. The Nalut-based rebels say they are under armed and under funded and must save their munitions until they absolutely must be used to defend the city. The tanks they have have been tagged with the letter N to let NATO warplanes know they are pro-NATO rebel vehicles so as not to accidentally target them. ©2011 Derek Henry Flood

Nalut- Last night a cool wind came sweeping up from the Sahara and brought the temperature here in the western Jebel Nafusa way down. It also was a miraculous night to observe the brilliant cosmos above. Nalut really wasn’t such a bad place it seemed for the first moment. With the power out in town, the lack of light pollution brought out the sky’s qualities that rest deep in one’s imagination. Then the Grad rockets started coming. Thump….thump….thump! The windows of the journo flophouse began to steadily shake. One moment I’m watching an episode from the 22nd season of the Simpsons on my ipod relishing in the forgiving night air for one, the next I’m running around the courtyard in boxers and flip flops trying to figure out what the hell is going on. Just when I was starting to get comfortable. Damn Qaddafi…The Brotherly Leaderly Guide or whatever the hell he calls himself these days is more than just a ranting kook. He is embodying the worst qualities of an African or Arab dictator with lots of cash and weapons. His army which I suppose is teetering somewhere between state and non-state actor as a number of world powers have effectively de-listed his government as they have recognized the TNC.

So I went back to bed. And then the Grad shells came ‘hailing’ down through the gorgeous night sky once again. And again. When the last of the explosions stopped around 8am, I walked out of the flophouse with all my gear only to see that the whole town, well the men of fighting age who have stayed behind, were all huddling outside as if scurrying from the tremors of an earthquake. Hundreds of them lining the winding roads of this forsaken little place. Should I stay or should I go? Well I’ll see what happens tonight I suppose. Most journos blaze past this town looking for some frontline glory perhaps, or the so-called ‘meat of the story’ but if you turn over a few rocks, there is actually a hell of a lot going on here and if bravado is your angle well it has a healthy dose of danger as well. All sorts of interesting machinations with Qataris, Emiratis, rumors beyond Tunisian acquiescence to outright involvement etc. But not a scene one should or can get to relaxed in.

An Amazight fighter truck speeds towards the Wazin border post. Whizzing techincals are about 1/3 of the traffic on a day like today. ©2011 Derek Henry Flood