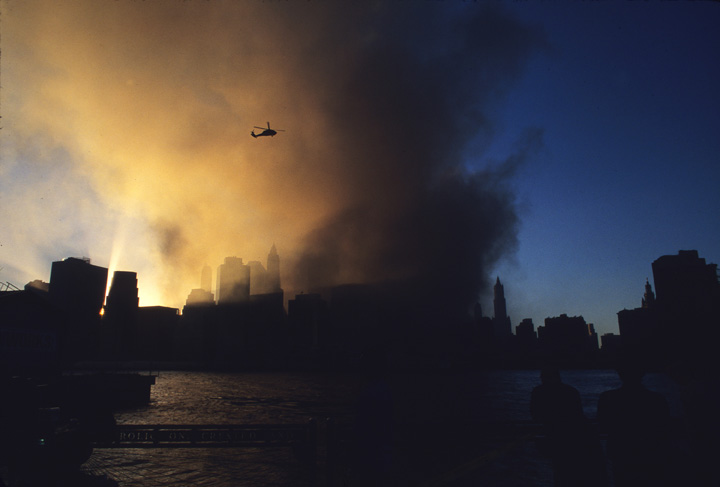 A Blackhawk helicopter flys above the plume surveying the destruction of the World Trade Center on 9/11. This never before seen image was made adjacent the River Cafe on Brooklyn's DUMBO waterfront at approximately 8pm after the suicide attacks killed nearly 3000. ©2001 Derek Henry Flood

New York- In advance of the tenth anniversary of 9/11, I scanned a number of never before seen images that I shot on that ashen evening a decade ago. I knew this day would eventually come but it is all still so vivid. 9/11 helped to lead me all around the world from Brooklyn to Kunduz to Hamburg to Najaf to San Diego to Kuala Lumpur to Tarragona and on and on. I have followed both the trail and aftermath of this event more doggedly than almost anyone. What sets my story apart is that I simply lived much of it. I lived in San Diego when Nawaf al-Hazmi and Khalid al-Midhar did. I used to deliver pizza to the apartments across the street from Anwar Awlaki’s mosque. I met the Taliban in Peshawar less than a year before 9/11 when I was writing what would become my senior college thesis.

I was already planning a trip to Afghanistan when 9/11 happened. I was in the process of tracking down the Taliban at their office here in Queens which they had set up to lobby the UN (unsuccessfully) for international recognition beyond that granted to them by Riyadh, Abu Dhabi and Islamabad. I was in touch with the Italian photojournalist who had shot what would turn out to be Ahmad Shah Massoud’s obituary photo in the NY Times. He would in turn be assassinated by an Israel Defence Forces conscript in Ramallah just six months later. The carnage would not end there.

Witnessing 9/11 in New York allows one a few exemptions. Having been in Manhattan and Brooklyn that day (and having been in Pakistan before and Afghanistan afterward) allows me the intellectual liberty of never having to entertain tiresome conspiracy theories. There is a certain righteousness in tragedy. If I choose,  I don’t have to listen to anyone’s opinion who was not there about what they think happened…much less anyone who has never been to New York or the US as they pontificate their ridiculous ideas. There was a conspiracy behind 9/11. It involved a group of Arab Salafi-jihadi men who sought to punch a hole in the heart of the West.

Yes there are a ton of things we can never understand about how exactly things went down that day or what transpired in Hamburg and the Afghan camps before 9/11. Yes the 9/11 commission report is full of holes, vague on many, many details, and is an overall shoddy document. But none of that amounts to the justification of nonsensical 9/11 theories put forth by armchair crackpots, middle class Peshawaris, or anti-American social democrats. And finally, yes, 9/11 justifies almost none of the clumsy, giant footprint military actions that took place in its aftermath. 9/11 was never a justification for human rights abuses or going to bed with gruesome dictatorships (think Islam Karimov’s Uzbekistan et al).

It was not 9/11 itself that heralded the stark polarization so desired by al-Qaeda. It was the response to 9/11 that divided the world more than the post-colonial, post-war realm had already been. A decade of talking about who has won and who has lost is both immaterial and intellectually childish. It was never about winning or losing. It is about carrying on with life. Getting on with the business of this awkwardly, unevenly integrating world. Forget about the concept of globalization and its discontents.

My dream morphed into a mission. Photographer became photojournalist. A day turned into a decade. Photojournalist became journalist. Life into death. Day into night. Dark into light. 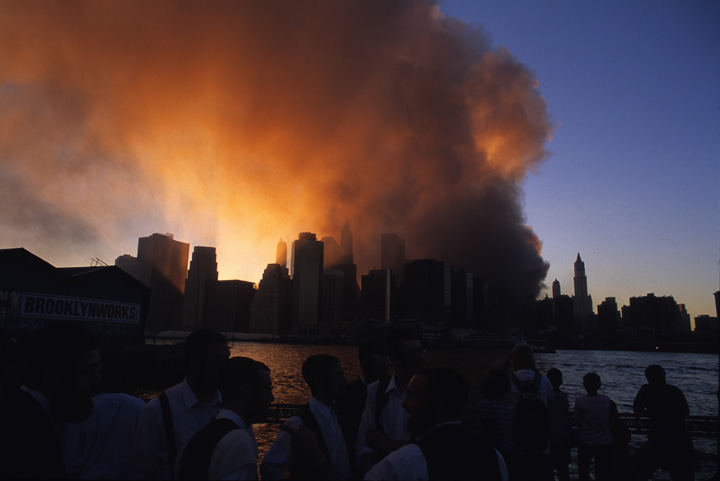 Brooklynites gazing at the plume in the aftermath of the destruction of the World Trade Center on 9/11. To their left TV crews prepare to broadcast. This never before seen image was made weeks before America would begin to wage war in Afghanistan, its longest hot war in history. ©2001 Derek Henry Flood 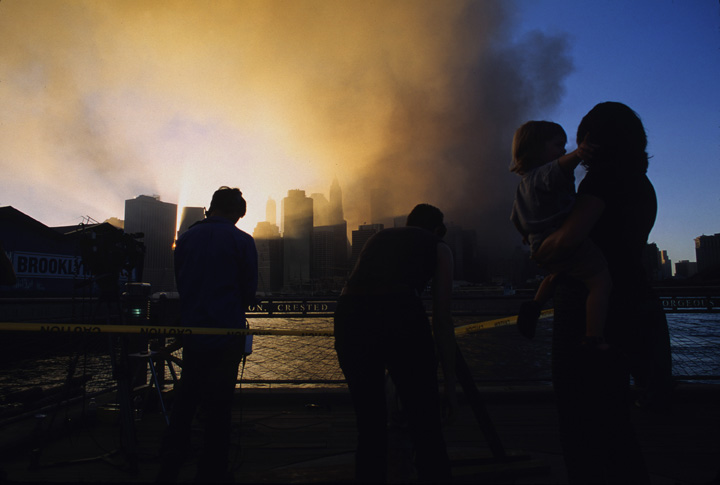 A mother holds her daughter while gazing at the plume in the aftermath of the destruction of the World Trade Center on 9/11. ©2001 Derek Henry Flood 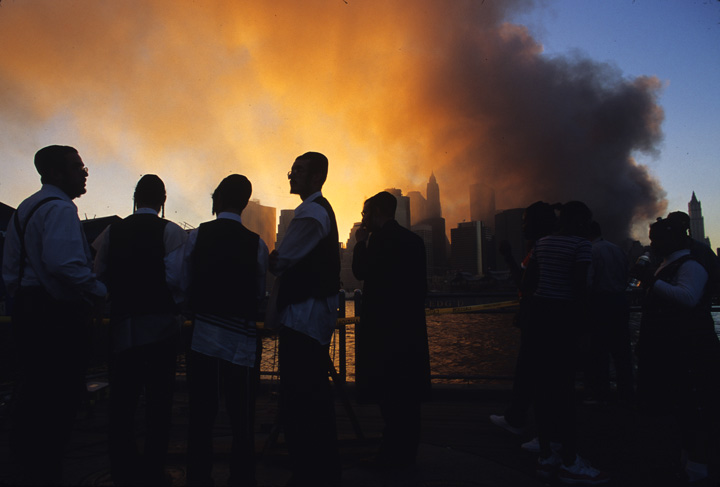 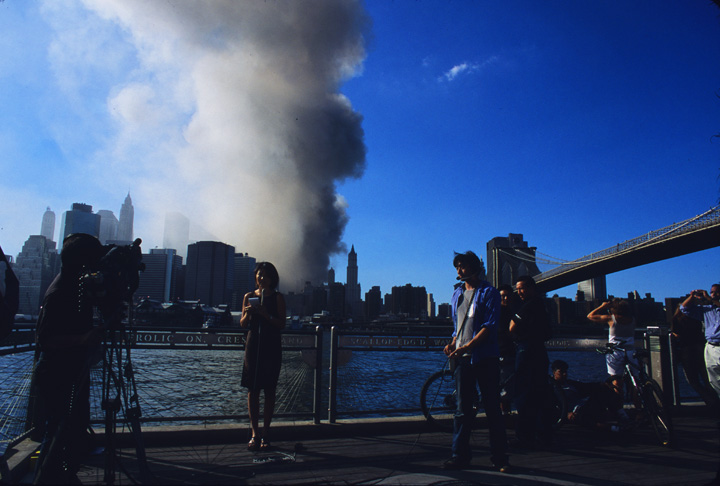 A Japanese reporter broadcasts live from Brooklyn with the WTC plume as a dramatic backdrop. ©2001 Derek Henry Flood 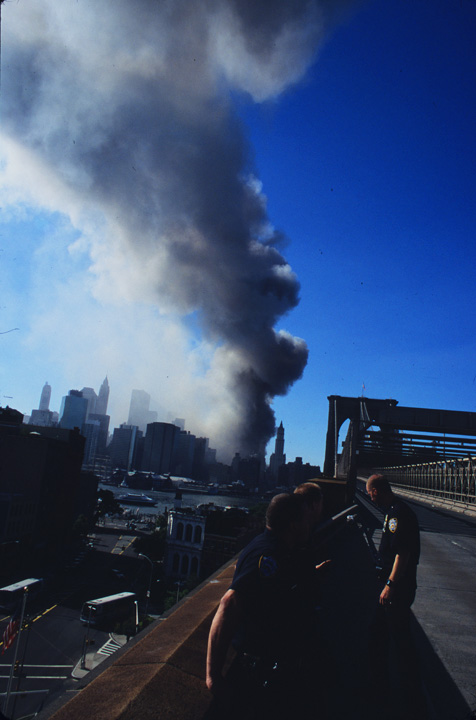 NYPD officers can do nothing but watch as lower Manhattan smolders after they were ordered to close the Brooklyn Bridge. The shock had not fully set in yet. ©2001 Derek Henry Flood