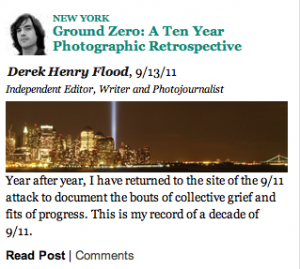 New York- What began as one horrific day turned into a decade long quest. 9/11 did not change the course of my life, it merely accelerated it at hyper speed. In the weeks before the suicide attacks on New York, I had been studiously laying the groundwork for a photographic journey inside Taliban-ruled Afghanistan. I had hoped to undertake the trip in the spring of 2002 when the first winter snows would begin to melt. The Taliban regime maintained a little known office in a working-class section of New York’s Queens borough. Taped to the front of the ad hoc mission’s cheap wooden door was a sign printed up on computer paper that read: “Mission of the Islamic Emirate of Afghanistan” in English, Pashto, and Dari. 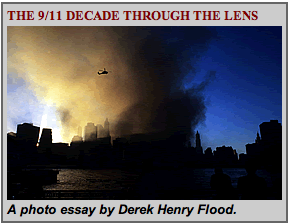 From this non-descript medical building filled with Indian doctor’s offices, two Taliban diplomats shuttled back and forth to the United Nations headquarters in Turtle Bay. Shunned by the majority of the international community when word of their track record on women’s rights or lack thereof and anti-Hazara pogroms became publicized, they tried and failed to win over other nation-state’s representatives to grant them the international recognition they craved. My cold calls to these men were met with great suspicion. They wanted records of what university I attended and a detailed study of my employment history to even consider granting me a tourist visa to their then forgotten backwater that occupied my dreams.

In the interim, I studied up on all the available literature on the group that existed in August of 2001, which was next to nothing. I then happened upon a rather obscure text in the warrens of The Strand, New York’s most famous used bookshop. The book, Taliban: A Shadow Over Afghanistan by a German academic called Burchard Brentjes and his wife Helga, was translated into English and published in Varanasi, India. I scooped up the book, confident it would not be missed by anyone else that August and shuttled it back to Brooklyn. On a balmy evening two days before 9/11, I sat upon the tar papered rooftop of a brownstone row house and excitedly flipped through the text, occasionally glancing up to watch the setting sun radiate off the Twin Towers of the World Trade Center on the other side of the East River. I sat in wonderment, thinking about this devastated, landlocked country a half a world away that captivated my imagination since a pair of backpacking visits to its borderlands in Pakistan’s Baluchistan and Northwest Frontier Province (since renamed Khyber-Pakhtunkwha Province) in 1999 and 2000.

Afghanistan under the Taliban was a weak, chaotic place that drew in Salafi-jihadi terrorists from around the globe to its realm ruled by accommodating Deobandi Islamists with a myopic worldview.  The relationship between the Taliban and al-Qaeda was a highly transactional, murky one and, at the time, the two entities were considerably less interdependent than many might assume looking back on the era today. That important nuance would matter little when 19 men from four Arab countries would hijack four passenger jets and use two of them to pulverize the densely populated New York icon killing nearly 3000 people. The destruction of the World Trade Center would set the stage for the first decade of the twenty-first century, much of it disastrous. It would transform me from a curious California geography student into a war correspondent. Year after year, I returned to the site of the attack to document the bouts of collective grief and fits of progress. This is my record of a decade of 9/11.