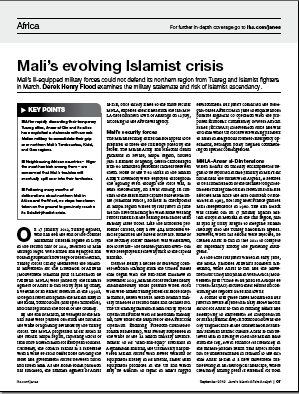 Barcelona- I have a new article out today for IHS Jane’s Islamic Affairs Analyst (subscription only) based on my fieldwork in Mali in May and June and loads of armchair work in NYC and here in BCN. Though this shaky so-called unity government has been formed-which explicitly excludes northern salafi-jihadis from the outset-nothing on the ground has fundamentally changed in Mali.

Yes, Ganda Koy/Iso are busy having new flip-flop clad volunteers doing summersaults for the odd journo visiting Mopti (though of course kudos to anyone making the effort to do such) and internationalist speak of intervention has gained a modicum of traction, yet the retaking of the northern regions seems as far-fetched as ever before. Corpo media flirted briefly with Mali before returning to its fixation on dear Syria. Multitasking by both news outlets and politicos is needed here. Mali can neither be swept under the rug nor can it withstand a blunt poorly thought out military intervention as took place in Libya. Mali pleads for nuance from the shadows.

It took the smashing to bits of UNESCO monuments fabricated of wood and sand to gain the attention of the world rather than a desperate food crisis and the flight of hundreds of thousands of Malians. I too am keeping an eye keenly trained on Aleppo-which according to Syrians is much more integral to bringing down the regime than the fall of Damascus-but my thoughts keep wandering back to Mali. It’s rich red earth, hot desert nights lit by a Sahelian moon, and those smiling bon soir‘s from a lovely people in a now benighted land.

← A Decade of War and Peace
Broken Windows on the World →