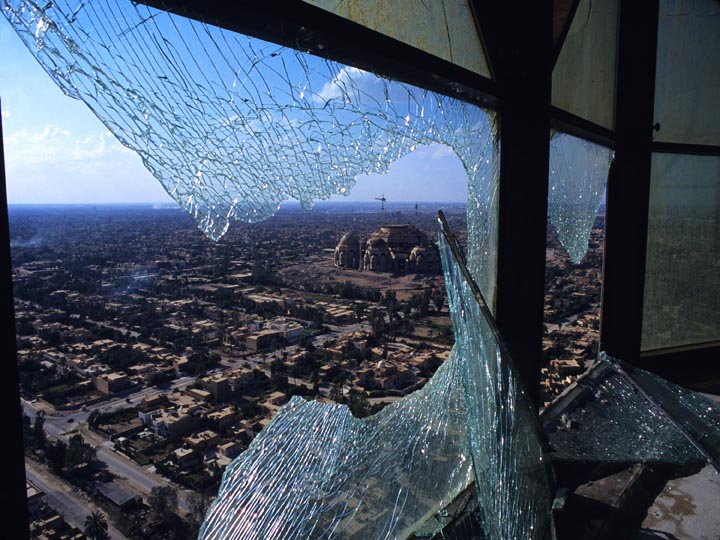 New York- Ten years ago today a group of neoconservative goons and their attendant lackeys were busy plotting the destruction of the Iraqi capital in the auspiciously named “Office of Special Plans” at the Pentagon. The result was what you see in the above photo. Me, entering Iraq illegally without a visa, able to climb to the top of Baghdad Tower with a group of looters calling themselves members of the Kurdistan Socialist Party. Situated below is the posh al-Mansour district where President Saddam Hussein–then the world’s most feared Tikriti–had been busy constructing the al-Rahman mosque which was meant to be the third largest in the world after the Al-Masjid al-Nabawi in Medina and the Masjid al-Haram in Mecca.

From the top of the tower (which I had read was supposedly a revolving restaurant seated close the pinnacle of a post-Gulf War telecom needle) were spectacular views of the brown concrete and asphalt city below. Fires could be seen burning unabated with no fire department in sight, the constant echo of gun shots ricocheting here and there, groups of men in adidas track suits careening around in Toyota rustbuckets robbing Ba’ath Party buildings with abandon. The mosque–ostensibly a Sunni one–was immediately taken over by the Shia hawza that April. It still sits in the historically Sunni al-Mansour area unfinished to this day. It cannot be demolished for reasons of religiosity and cannot be completed for reasons of economic priority.

It was a real party in the ancient seat of the Abbasid Caliphate that April. The Americans had bombed the al-Ma’moun communications center at the tower’s base but had yet to secure access to the tower itself when I arrived that afternoon. Unlike several other of Saddam Hussein’s garish architectural adventures, the tower was never enveloped into the Green Zone (hence locating it in the amorphous, deadly geographical de facto superimposition known as the Red Zone). 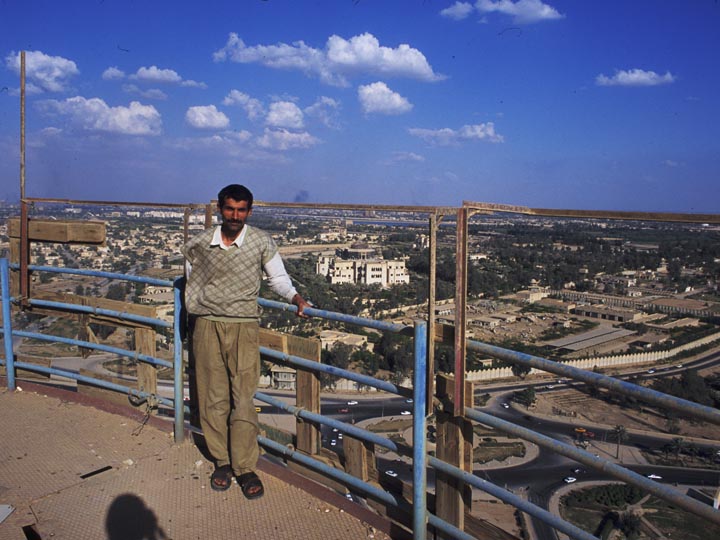 My guide/looter from the Kurdistan Socialist Party on the observation deck of Baghdad Tower on April 28. 2003. These guys were stripping all the copper wiring from the telecom tower’s innards to sell for scrap. Baghdad that day seemed like the most unlettered free-for-all I’ve ever witnessed and Americans presided over the whole deal. ©2003 Derek Henry Flood

I sometimes stare at these photos and ponder how many suicide bombings in the ensuing years could have been witnessed from the 360-degree views provided by the tower’s observation deck. How many Iraqis died and how Douglas Feith and other American Likudniks are still living such comfortable lives. Contrary to media reports, these Iraqis were neither nameless or countless. But…their deaths were indeed both needless and pointless.

As the current unending pseudo-debate over Iran and its nuclear program illustrates, Israel’s military hegemony in the Levant was not particularly enhanced by the destruction of Ba’ath Party edifices in Baghdad in 2003 and it is no more secure today as a result. More importantly, Iraq is certainly not anymore secure. It is now a venue for Iranian influence and a conduit for Sunni salafi-jihadis to enter the Syrian civil war. 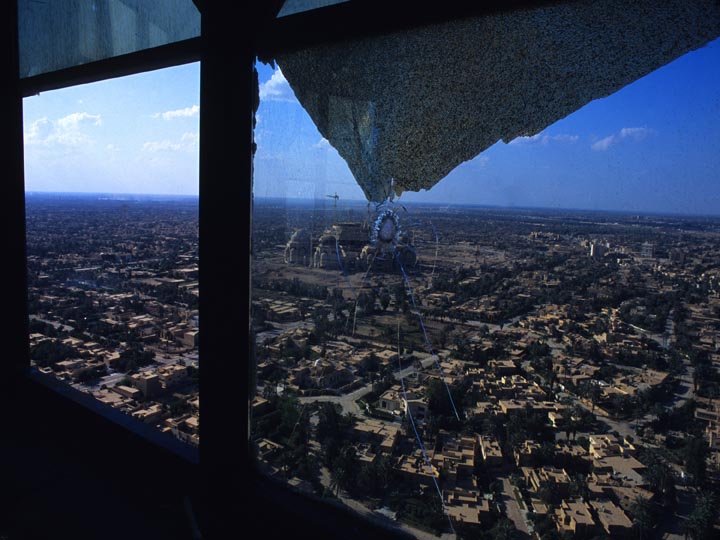 An alternate view of the al-Rahman mosque and the layout of al-Mansour district looking northwest from the looted restaurant atop Baghdad Tower situated on Shara al-Urdun (Jordan Street). Note the bullet hole in the center of the image. ©2003 Derek Henry Flood 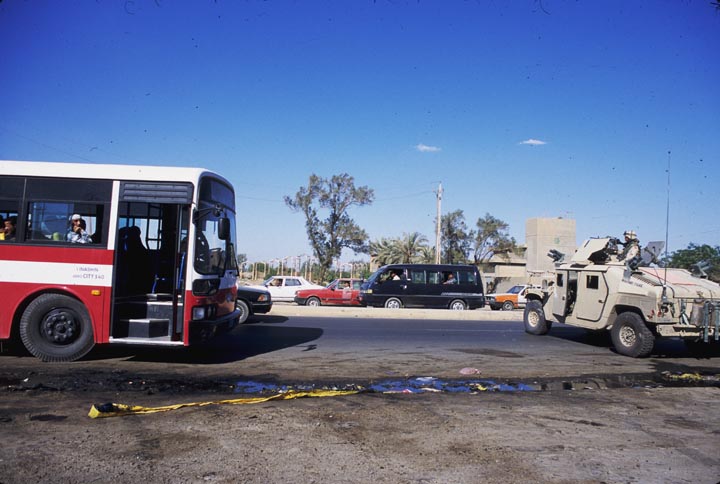 A soliloquy of chaos. An American soldier mounts a turret on a perpendicularly parked humvee to block a Baghdad thoroughfare as beguiled Iraqi bus passengers look on. Look at the gulf between the two petrol-guzzling vehicles. That is a kill zone. When I asked from the sidelines what was going on, a soldier shouted that a “VIP” convoy was en route and warned me not to step forward. So much much for taking a walk around the Iraqi capital. ©2003 Derek Henry Flood 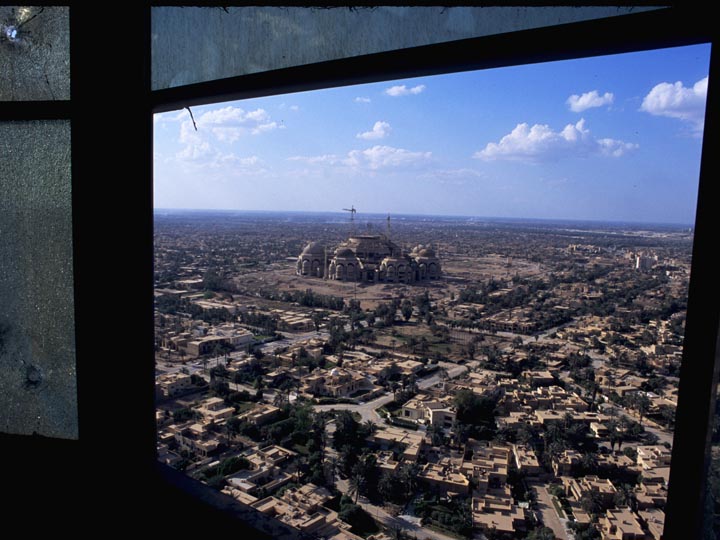 Another, unobstructed view. I remember thinking that I was vulnerable to sniper fire while framing this shot…as well as falling to my death. ©2003 Derek Henry Flood