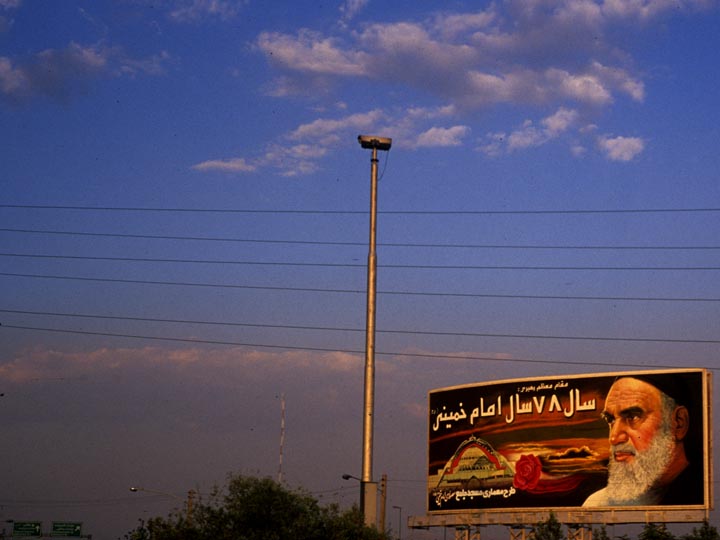 A billboard of Ayatollah Ruhollah Khomeini on the outskirts of Tehran. Although the U.S. has been in outright conflict with Salafi-jihadism for twenty years now beginning with the 1993 bombing of the World Trade Center which involved Khalid Sheikh Muhammed, American policy can often feel stuck in ‘Argo’ in its relentless pursuit of a post-Shah, Shia-ruled Iran and its proxies. Iran is governed by principle peculiar to modern Shi’ism known as velayat-e-faqih, “the guardianship of the jurist” which is a complete anathema to Sunnism’s al-Salafiyya-al-Jihadiyya doctrine. ©1999 Derek Henry Flood

New York- It’s been twenty long years since Eyad Ismail, Ramzi Yousef and co drove that Ford Econoline Ryder rental van through the Holland Tunnel from Jersey City and parked a massive urea urea nitrate bomb in the parking garage of the North Tower of the World Trade Center. Today was a quiet anniversary of an event largely forlorn in America’s national collective conscience in the shadow of the much more dramatic 9/11 attacks.

That wintry day two decades ago, the United States faced the beginning of a poorly outlined struggle against the decentralized doctrinal ideology of al-Salafiyya-al-Jihadiyya [Salafi-jihad]-a form of Islamism that articulates violent means to achieve political gains.

One of the points about the Sunni jihadi attack on New York in the winter of 1993 is that it marked an unexpected pivot from the perceived threat of highly centralized millenarian Shia revolutionaries and resistance terrorism epitomized by the rise of the clerical regime in Iran in 1979 and the formation of Hezbollah in Lebanon in 1982.

This suited America’s so-called ‘moderate’ Sunni or Sunni-dominated allied nation-states just fine. These regimes could be free to espouse anything from the export of the Wahhabiyya strain of Salafism that serves at the state theology in Saudi Arabia and Qatar to the Marxist-tinged radical Arab socialism emblematic of the Hizb-al-Ba’ath (Ba’ath Party) or the post-Nasserist-turned-personality cult regimes of Egypt and the Maghreb. That was of course until these ideas either collided with American foreign policy as in the case of Iraq or collapsed under their own weight as in the case of Tunisia.

A friend who was stationed for the U.S. State Department in Saudi Arabia’s Eastern Province-where the 1996 Khobar Towers bombing took place-and later Bahrain, privately hinted to me this view of the Shia threat had changed little at least in some official channels even while the U.S. was propping up a succession of Shia prime ministers in its Iraq project and its Special Forces had fought alongside Shia irregulars to oust the Taliban in northern Afghanistan.

But while the United States has done a great deal to degrade Ba’athism by invading Iraq in both 1991 and 2003 and aiding Syrian rebels bent on demolishing the Ba’ath in Syria at present, for instance, American foreign policy still remains fixated on Iran and Hezbollah and would still not dare challenge the vitriolic Wahhabism prevalent in the Arabian Peninsula. Though it is a fool’s errand to pit absolutist wings of Islam’s great schism against one another for purely hypothetical purposes, it has been transnational Salafism that has attacked the American homeland in 1993 and 2001 and in East Africa in 1998 and Yemen in 2000. If the two fronts of radical Islamism were simplistically made analogous to the space race, Khomeini may have successfully launched Sputnik first, but it was bin Laden who put a man on the moon.

We should be reminded that the 1993 attack was connected to 9/11 through the common thread of Khalid Sheikh Muhammed (KSM as he came to be referred to in intelligence jargon-inflected reporting) who is currently in the pre-trial hearing phase of the never ending, apparently never closing saga at the sweltering detention facility at Guantánamo Bay, Cuba.

Though Yousef and the other 1993 plotters were not known to be formally pledged members of a then fairly embryonic al-Qaeda, they certainly were connected to the Peshawar-based jihadi nexus borne out of the CIA and Saudi funded anti-Soviet jihad that took place west of the Durand Line. The radicalization of the Masjid al-Farooq in Brooklyn and its refugee center-cum-Office of Services set-up visited by Abdullah Azzam was a definite factor in the 1993 plot. While the trial of the five accused al-Qaeda men in Cuba (KSM, Walid bin Attash, Ramzi bin al-Shibh, Ammar al-Baluchi, and Mustafa Ahmad al-Hawsawi) is referred to by the United States government as a “9/11 trial” In sense, it dates back the events of 1992-1993 in Brooklyn and Jersey CIty involving the men linked to KSM and the original plot against New York City.

Though there are conflicts about some of the precise specifics, one of Omar Abdel Rahman’s sons, Mohammed Omar Abdel-Rahman was nabbed (by the CIA, the Pakistanis or a mix of the two) in Quetta, Pakistan around the time of KSM’s apprehension when Pakistani authorities were hunting KSM. Mohammed Omar Abdel-Rahman is now a free man back at home in Egypt after having been listed as one of the CIA’s “ghost prisoners” (as was KSM) in 2005. He was released by the Mubarak regime in 2010.

KSM was apprehended in Rawalpindi, Pakistan ten years ago (though alternate sources may say he was actually captured in Quetta a month prior and the news of his arrest delayed by Pakistani authorities). His and four other co-conspirators’ painfully deliberating preliminary hearings has been described as being in “discord.” From what information does come out of the proceedings, it has partly the air of a circus what with Walid bin Attash (a.k.a. Khallad) making multiple outbursts about violations of attorney-client privilege and his defense lawyer wrapped in “a black abaya out of respect to the religious sensibilities of her client” according to a Guardian report.

The Miami Herald’s Carol Rosenberg describes the awkward goings on at Guantánamo as primarily focused on the ways in which the five suspects were captured and the conditions under which they were detained before being exfiltrated from “black sites” to the American naval base on Cuba’s southeastern coast. In other words, these proceedings are not about 9/11 .

A tourist shop just dozens of meters from the site of the former World Trade Center selling a model of the original Twin Towers. ©2013 Derek Henry Flood 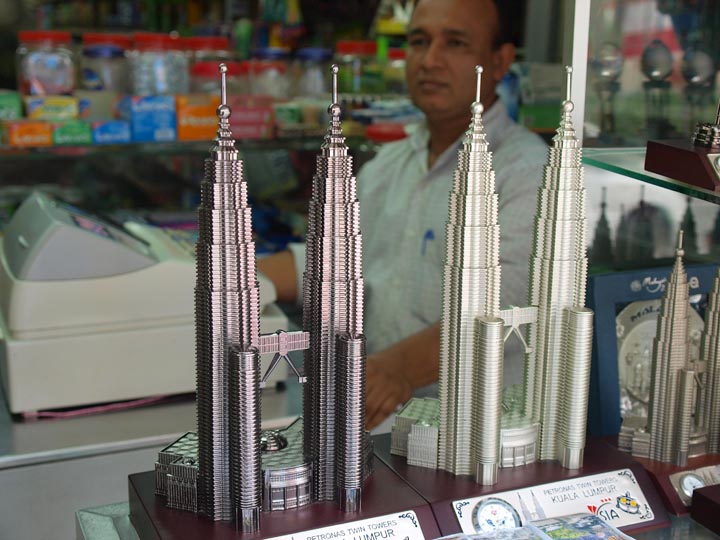 Half a world away from the shop in New York City, a similar shop near the base of Petronas Towers in Kuala Lumpur, Malaysia selling metal models of Southeast Asia’s twin towers. ©2010 Derek Henry Flood

← Beyond 2014: Afghanistan, Pakistan, the West and the Rest
Abou Zeid and Mokhtar Belmokhtar →