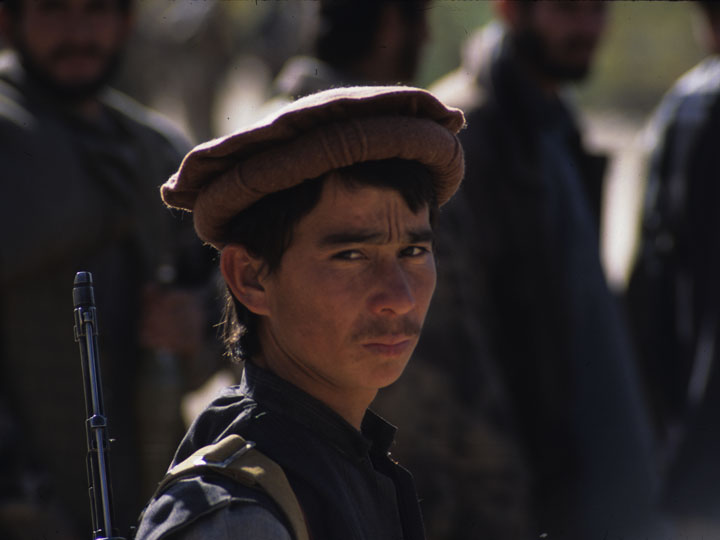 An ethnic-Tajik teenage fighter from Jamiat-i-Islami/Shura-i-Nazar on the front line between Khanabad and Konduz on November 15, 2001. These fighters, labeled “rebels” by the media at the time even though the Taliban government was only recognized by 3 states in the international community, were under the command of the now deceased Muhammed Daud Daud (whom certain reporters wrote up as Daud Khan at the time). Daud, who late became a top police chief for northern Afghanistan, was killed in what was purported to be a Taliban suicide bombing on May 28, 2011 at the Takhar provincial governor’s office in Taloqan. ©2001 Derek Henry Flood

New York- On February 5th, I participated in a Huffington Post Live discussion entitled “Engaging The Taliban” (featured below) after the trilateral meeting between David Cameron, Asif Ali Zardari, and Hamid Karzai at the British Prime Minister’s country residence outside London. The topic concerned the withdrawal of NATO and ISAF troops from Afghanistan at the end of 2014 and the idea of some kind of vague peace deal with the Taliban midwifed by Pakistan and meant to take place in Qatar. That talk inspired my lengthy article in today’s edition of Asia Times Online (at left).

Afghanistan, once a byword for forgotten backwater, has had its war become internationalized to the absurd point where even a good number of tiny non-NATO, non-Western nations like Georgia (desire to join NATO), the United Arab Emirates (business interests, Islamic hearts-and-minds credibility), and Tonga (pressed by the UK) have inserted troops. And nations like these have done so in the context of their very diverse, often non-overlapping agendas. 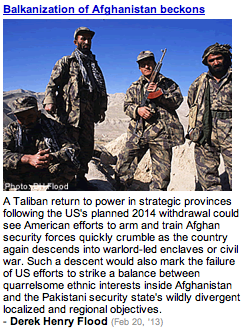 For Afghanistan’s non-Pashtun ethnicities who house a sense of collective victimhood, this is the equivalent of having the fox guarding the hen house. Despite US troops and intelligence officers partnering up with warlords who were deemed “legendary” in the earliest days of Operation Enduring Freedom, there are certainly no angels among any of Afghanistan’s warlords of all hues despite a certain amount of rather theatric press reportage at the time. But renewed political power for the Taliban, whose enemies believe it would use to gain military power in the theater of Afghanistan’s gun-barrel politics, would be the surefire catalyst for a retro-themed civil conflict.

Some factional military leaders especially those of the Jamiat-i-Islami/Shura-i-Nazar type whose 1980s and 1990s-era leadership has suffered a string of assassinations attributed to the Taliban such as Burhanuddin Rabbani and Muhammed Daud Daud in 2011, may likely be content to exact retribution in some form. Abdul Rashid Dostum– another sworn enemy of the Taliban who knows that he is on their target list–could easily fully remobilize his Junbesh-i-Milli militia when push comes to shove.

But the risks for the integrity of the Pakistani state have changed entirely since the Taliban swept in Kabul in 1996. The creeping Talibanization of Pakistan creates an entirely different calculus. Additionally anti-Shia/Hazara violence in Balochistan being carried out by Lashkar-i-Jhangvi seems to be at an all-time high, a dire crisis which Pakistan’s political leaders refuse to effectively address. All sorts of Taliban factions are now operating in Karachi, Pakistan’s commercial capital, and inflaming tensions with the very territorial, virulently anti-Pashtun Muttahida Qaumi Movement which portrays itself as the guardian of mohajir identity in southern Sindh Province.

Part of the advantage of Pakistani hegemony over Afghanistan in the 1990s was that Islamabad could have groups that it was funding or manipulating outside of its territory. Afghanistan was relegated to an obscure, abandoned backwater that was essentially a free-fire zone for regional proxy warfare. States from all over Eurasia were dragged into Afghanistan’s internecine battles.

Following 9/11, the Afghan morass brought into most if not all of the armies of the Western world. At the same time, Pakistan’s military and intelligence apparatus was ejected after the fall of Konduz in late November 2001. Now as the West and its allies clamor for the exits, Pakistan, Iran and other regional powers will be forced to reassess their role in the future of Afghanistan. And it does not look promising. The Pentagon would like to leave a residual number of troops behind for training and “support” missions pending an as yet unspecified status-of-forces agreement being worked out with Kabul.

Though the United States ending its combat mission in Afghanistan has made a big splash in the news, there has already been an attrition on Western troop numbers. Dutch troops packed up and left Uruzgan Province in August 2010 when the Netherlands enfeebled coalition government collapsed over the issue. The Dutch ditched their Australian partners in the home province of Mullah Muhammed Omar which created a vacuum that had to be filled by American troops. The French, now deployed in Mali in what is perceived as being a more immediate to France’s national interests, entirely abandoned their combat mission in Kapisa Province in November 2012. The final French combat troops then departed Afghanistan altogether in December 2012. New Zealand plans on pulling out the majority of its troops from Bamiyan Province by April of this year.

In the understated words of noted Pakistani journalist Rahimullah Yusufzai: “2014 and the Western withdrawal will not mean Pakistan’s problems are over.”

← Mali, North Korea and the Confluence of Histories
Twenty Years of al-Salafiyya-al-Jihadiyya →