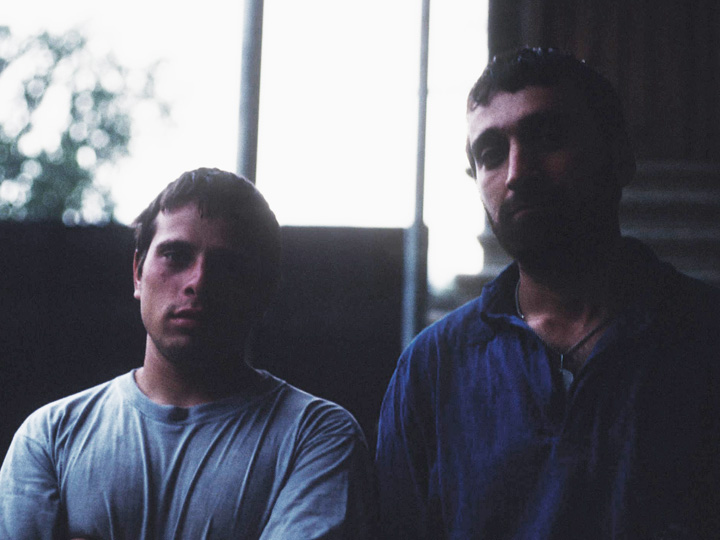 Murad Mazaev, right, in on a dim , rainy evening in Birkiani, Georgia, August 2002. Murad died near Aleppo, Syria in late May of last year. I was shocked to learn someone I once knew perished apparently as a salafi shaheed in war not concerning his own people. Murad had been living in Sweden as a refugee but decided to leave his young family and seek martyrdom in the war against the Ba’athist regime of Bashar al-Assad. ©2002 Derek Henry Flood

New York- While concluding a nearly month-long research trip to the Republic of Georgia in October, on my final night in Tbilisi I met with an analyst from Georgia’s MFA to discuss current trends in Islamic militancy in the North Caucasus and how those trends are currently tied to the civil war in Syria. As we concluded our dinner at a traditional restaurant on Rustaveli Avenue, my contact informed me that a Chechen filmmaker called Murad Mazaev I once knew back in 2002 had died months earlier in northern Syria. I was taken aback and disturbed by this bit of information and sought to dig deeper once I returned to the United States. 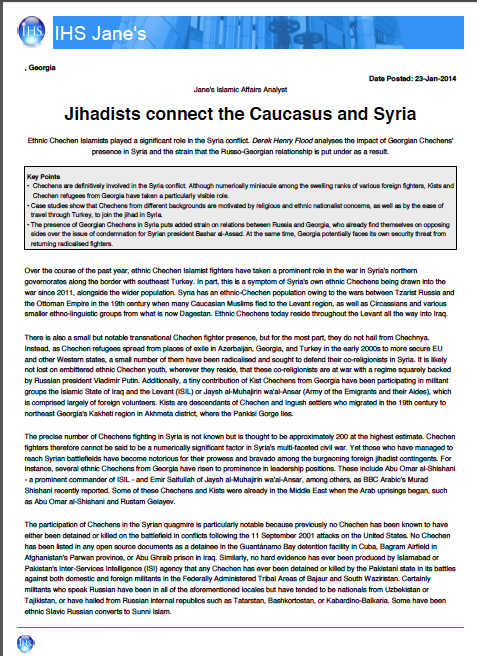 My Georgian contact pondered that Murad may have died trying to work as a documentarian but it began to seem more and more like he died as a jihadi perhaps fighting for Jaish al-Muhajireen wa’l-Ansar, a constituent movement of ISIL or ISIL proper. Who knows? When I tried to contact his former filmmaking partner in Canada about the circumstances under which Murad died, he replied “why are you asking me about this?” (I think they had had a falling out years previously) When I tried to contact a Chechen friend of Murad’s in Stockholm looking for answers about what motivated him to leave the cold comforts of Sweden, no reply.

As I began working on an article on the topic for IHS Jane’s Islamic Affairs Analyst, I decided to weave Murad’s tragic tale of refuge, asylum and ultimately doomed salafi jihad, into my work. Murad never struck me as the type to pick up arms. Sure he was a die hard Chechen nationalist and devout Muslim, but a jihadi abandoning his young family to seek martyrdom in Syria? That was hard for me to digest.

Murad and I had last been in touch in the autumn of 2010 via email. In his very broken English he informed me that he was living in Sweden but was not then currently still pursuing his dreams of becoming an internationally acclaimed filmmaker. He struck me as being enamored of the mujahideen when we first met, but still an erudite kid from Grozny who wouldn’t be very effective marching through a battlefield with a Kalashnikov rather than a camera, 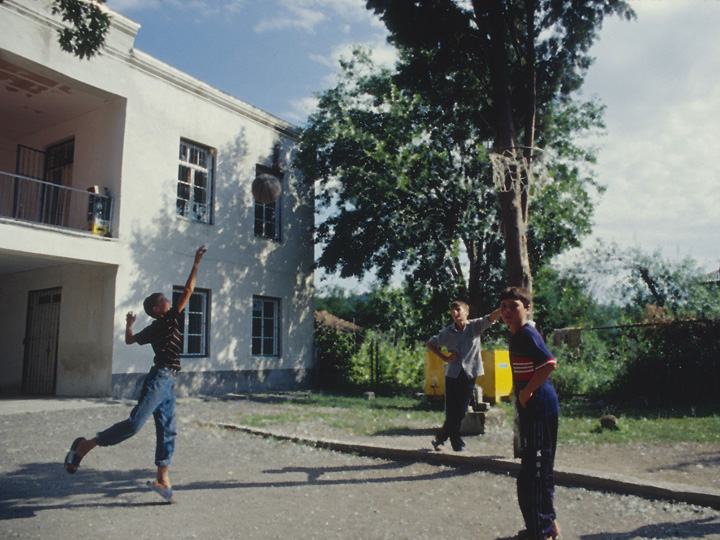 When Murad snuck me into the Pankisi Gorge 12 years ago, the first photos he let me shoot were of kids playing basketball at the main school in Duisi. He was nervous if the wrong people found out he had smuggled a Western journalist into the territory that was out of the hands of then President Eduard Shevardnadze. I’ll never forget Murad putting a traditional Chechen cap on my head as we boarded a bus from Akhmeta to Duisi. I did my best to blend in when a Georgian soldier boarded the bus asking “dokumenta!” ©2002 Derek Henry Flood 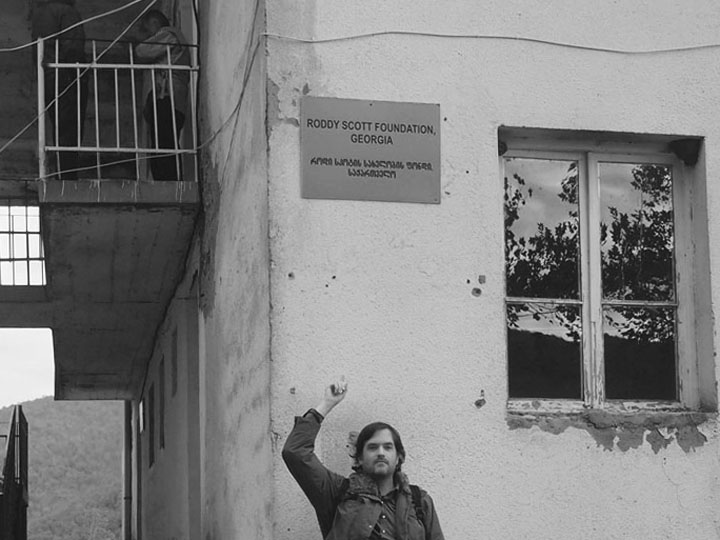 Over eleven years on I revisited this school in Duisi which was now the home of the the Roddy Scott Foundation. Roddy was an English journalist who had known Murad and later traversed the Greater Caucasus range with a unit of Ruslan Gelayev’s mujahideen with Murad’s knowledge. He was then killed by a Russian sniper in the town of Galashki in the Republic of Ingushetia.

Murad’s proudest achievement was making the world’s first Chechen-language film…and with genuine mujahideen from Ruslan ‘Hamzat’ Gelayev’s Pankisi-based unit as extras no less. It was partly through meeting Murad in Tbilisi nearly a dozen years ago that I became fascinated by the struggle for Chechnya and the oppressed people of the Caucasus who suffered wildly under the Czars, Stalin all the way to Yeltsin and Putin. Murad acted as my fixer in meeting the Chechen refugees inhabiting the Pankisi Gorge when it was making headlines around the world but few journalists were actually venturing there. 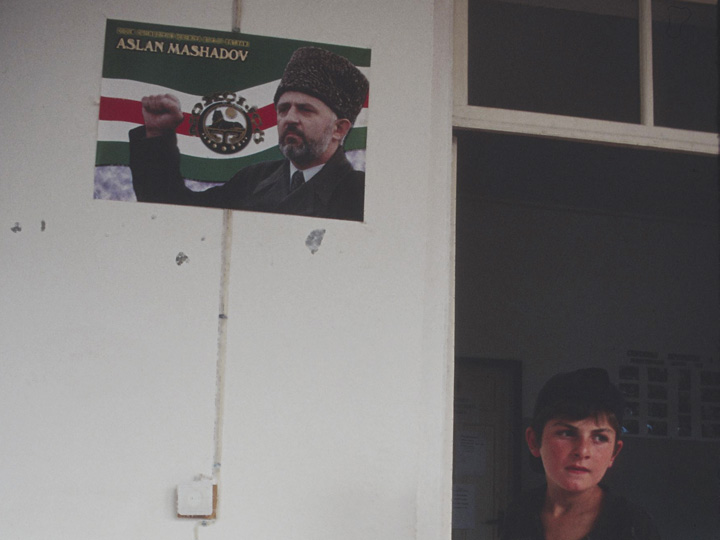 At the school building in Duisi, then being run by a Norwegian NGO, a Chechen refugee boy stands beneath a Turkish-made poster of Aslan Maskhadov, the emblematic leader of Chechnya’s national liberation movement. Maskhadov was killed by Russian federal forces in March 2005.  At the time, the Guardian labeled Maskhadov “Chechnya’s Arafat.”As nationalism waned, salafism became the dominant ideology ©2002 Derek Henry Flood

But in Chechnya as the war there has mercilessly ground on since it first began in the mid-1990s, the ideology powering the fight has transitioned from Sufi-inflected Chechen nationalism to destructive transnational salafism. No longer was merely an independent Chechen republic the goal, but the proclamation of an Imarat Kavkaz (Caucasus Emirate) spanning from the shores of the Caspian to the rocky beaches of the Black Sea. 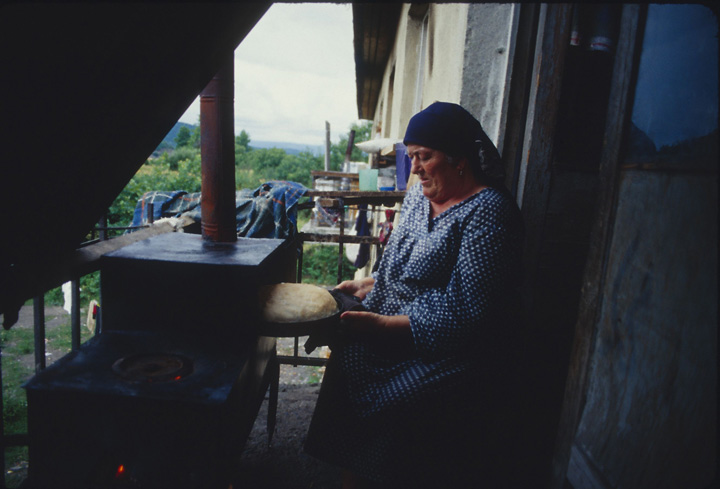 Murad took me to meet this Kist woman in Duisi who was baking flat bread for the Chechen refugees that had sought shelter there from relentless Russian aggression and the ensuing guerrilla warfare that attempted to counter it. He wanted the world to know of the suffering of his people. ©2002 Derek Henry Flood 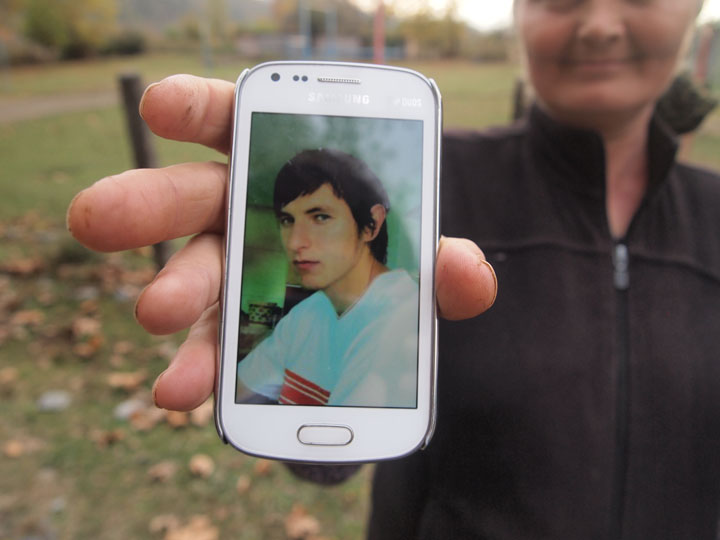 When I revisited Pankisi again in 2013, it was not to learn about foreign militants traveling north to wage jihad in Chechnya, but to learn about who the next generation of Chechens were going in the opposite direction to fight and die in Syria. Rustam Gelayev’s aunt holds up a smartphone image of her late nephew who, like Murad, died in northern Syria at the age of 24 in August 2012. Above is a very different image of a slightly younger Rustam than the one that circulated on twitter of him holding a rifle presumably in Aleppo Governorate. ©2013 Derek Henry Flood

When I was back in Pankisi in October to meet with members of the Gelayev family to find out their version of events surrounding the death of Ruslan’s son, Rustam in Syria in mid-August 2012, no one admitted to remembering Murad but when I mentioned Roddy their eyes lit up. Roddy’s parents, Robin and Stina Scott set up the Roddy Scott Foundation to teach English to the youth of Pankisi in their effusive son’s memory. Sadly, Murad sought to put Chechnya on the map in terms of global conscience but he was killed in Syria in what remain murky circumstances. From my canvassing of residents in Duisi, Jokolo and Birkiani, no one seemed to remember his contribution to collective Chechen culture.

What the deaths of Murad and Rustam do indicate is the significant fact that Chechens are now participants in a war outside the North Caucasus. For those of us who covered the wars on the ground in Afghanistan and Iraq and war theaters elsewhere after 9/11 where Chechens were never proven to have fought, this feels like a sea change.

On another very grim note, I belatedly found out that someone whose work I really admired died in the Taverna du Liban attack in Kabul.

Alexandros Petersen who was a colleague of my colleague Rafaello Pantucci was murdered in the recent attack on the Lebanese restaurant in Wazir Akbar Khan. Petersen was an analyst of big-think Eurasian geopolitics in the style of Sir Halford Mackinder and authored The World Island: Eurasian Geopolitics and the Fate of the West which I’ve had in my Amazon queue for some time now and been meaning to read. Now I must. Though I never had the pleasure of meeting him, we wrote for the same D.C. think-tank where I once served as an editor and analyst a few years ago. We are now less one brilliant person who went to great lengths to understand and explain the geopolitical trends shaping today’s world. For shame.

When I first heard about the Taliban operation in the Afghan capital, I recalled spending a fun evening at the Levantine hangout with journalist Jason Motlagh and another guy based in Bangkok who talked about his mission of interviewing Viktor Bout multiple time in a Thai cell before Bout was extradited to the U.S. for prosecution. The latter guy-whose name I don’t remember five years later-and another journo and I walked from WAK all the way back to Shar-e-Nau at about 2 a.m. and I, in a sort of gallows humor, half joked, “we couldn’t do this in Baghdad” (i.e. walk home in the middle of the night). That was back in 2009. Things got worse as that year went on with the attack on the UN compound that September and suicide bomb walls going up around the Indian embassy and so forth.

Are things arguably worse now in 2014? It’s tough to say from sitting here in the West. But I can say this much-I may go back to the old school routine of donning a shalwar kameez and beard when I go back to Afghanistan. Kabul has often been considered a world apart from the rest of Afghanistan in terms of its comparative cosmopolitanism in relation to life in the provinces but it is still Afghanistan. The Taliban want to let the world know that they retain the ability to strike at will anytime, anywhere in the country.

In other news, I have a photo contribution in the new issue of The Washingtonian in the article titled This Is Danny Pearl’s Final Story by Asra Q. Nomani. My image is that of Nomani and Pearl’s home in Karachi’s tony Defence Housing Authority (DHA).

← The Levant in Flames
Occupy Sochi →