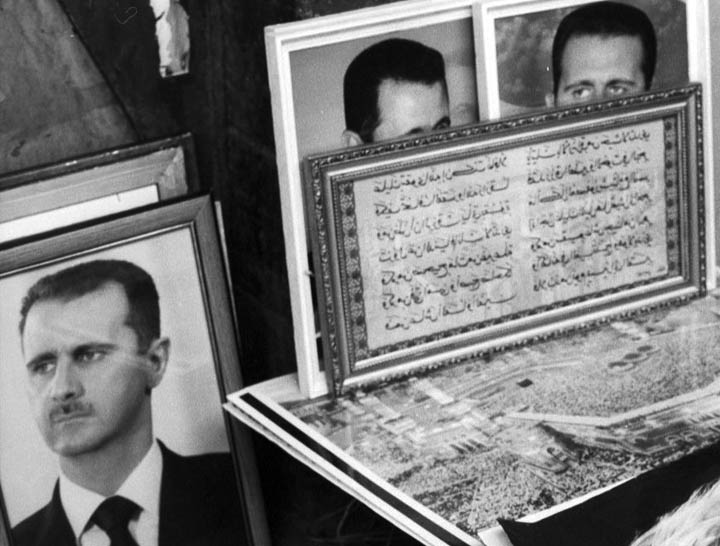 Portraits of Ba’athist leader Bashar al-Assad gazing off in different directions at a market in Damascus two years after he succeeded his father. Despite some neoconservative sabre rattling toward Assad after the American invasion of Baghdad, it was otherwise unthinkable that his minoritarian Alawi regime would be genuinely threatened by an uprising-Salafist or otherwise-after the “Hama solution” precent set by his father in 1982. Now the inter-insurgency war pitting secular nationalists, salafi nationalists, Kurdish ethno-nationalists and salafi-jihadis against one another may give Assad a chance at partially saving his enfeebled Russian and Iranian-backed regime. ©2002 Derek Henry Flood

New York- There two major interconnected stories in the Levant this week: the internecine fighting between the salafist rebel factions vying for dominance in the northern Syrian war theatre and the Anbari uprising-cum-chaos in Ramadi, Fallujah and smaller villages west of Baghdad. I appeared in a live discussion on the Syrian issue with Samir Nashar of the Syrian National Council in Istanbul and Ahmad Abazed, an analyst on Syrian affairs in Amman. We talked about the battle between Ahrar al-Sham and its allies and ad-Dawlah al-Islamiyya fi Iraq w’al-Sham (the Islamic State of Iraq and the Levant-ISIL) mostly in Idlib, Aleppo and Raqqah governorates. 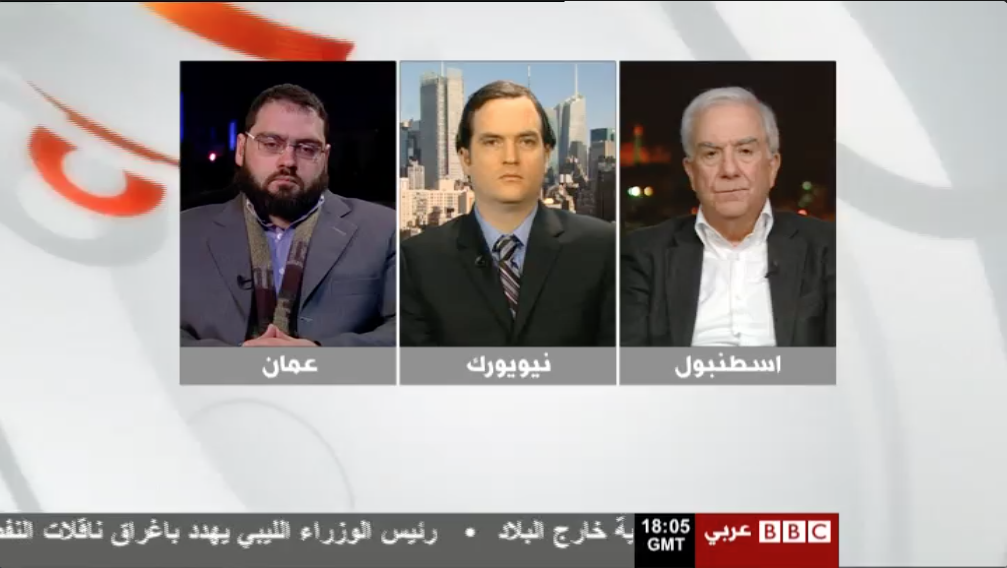 As Syria’s conflict becomes ever more confounding, peer competition among insurgent movements appears steadily on the rise. The confounding bit is that while at war with one another in some governorates, Ahrar al-Sham, ISIL and Jabhat al-Nusra are reportedly still working together against the Kurdish PYD’s YPG militias in al-Hassakah Governorate and the relationship between those two groups is murky. The fact that so many journalists have disappeared in Syria certainly doesn’t help matters.

I stated that I believe this battle is partly a Darwinian battle for primacy that we have seen in many civil wars and revolutionary movements from 1979 Iran to Sri Lanka in the early 1980s. Often one group needs to push its one-time allies aside, often violently, so that its ideological strain becomes the dominant, and then sole one in the war theater. In doing so, the regimes these movements are fighting can no longer say they are fighting small bands of revolutionaries they can then divide and co-opt. A singular voice is more adept at creating a revolutionary or separatist state.

Part of why things in Syria have evolved in such a way is because the world failed to label the crisis there as a revolution. Instead, it was repeatedly labeled a “crackdown” against protestors like the failed Shia uprising in Bahrain. When external powers finally did decide to act in Syria, they did so without harmony and according to each’s self interest by aiding the rebel groups of their choice. This only heightened peer competition among rebel factions vying for influence. With no unified policy on how to aid Syria’s rebel movements, the pendulum will continue to swing between ISIL and its adversaries in cities like Aleppo and Raqqa.

I’ve been closely following the uprising in Anbar, with federal forces being pushed out of Fallujah and the governorate’s capital Ramadi. I’m interested in how this Anbar situation relates to Syria and also how it relates to the events of 2003-2004. ISIL has been strengthened by the war in Syria undoubtedly but the events in Anbar are also part of the larger atmosphere of Sunni discontent in Maliki’s Iraq.

I don’t think ISIL’s agenda has broad-based popular support by any means, but it couldn’t exist with zero sympathy for at least some of its sectarian aims either.  ISIL will not be welcomed in the larger population centers for long as locals will not have forgotten the group’s brutal legacy of takfiri hellfire. And though the tribal militia’s certainly have a tense relationship with federal forces in the post-American era, the two may have more in common in the meantime in fighting to eject ISIL in villages outside Ramadi. At the time of this post fighting in Ramadi proper is still ongoing with tribal fighters and Iraqi state forces reportedly working together against ISIL.

So now we see ISIL fighting on two disparate fronts in Anbar and Raqqa et al both of which now appear just as much aimed at fighting fellow Sunnis as well as the largely non-Sunni regimes in Baghdad and Damascus that, for each’s respective strategic interests, are in league with Tehran.

What level of coordination–if any–exists between these wings of ISIL is not really concretely known to my knowledge. What is known is that the longer the relevant external actors don’t have a cohesive foreign policy toward Syria, the longer the Levant will continue to burn unabated. 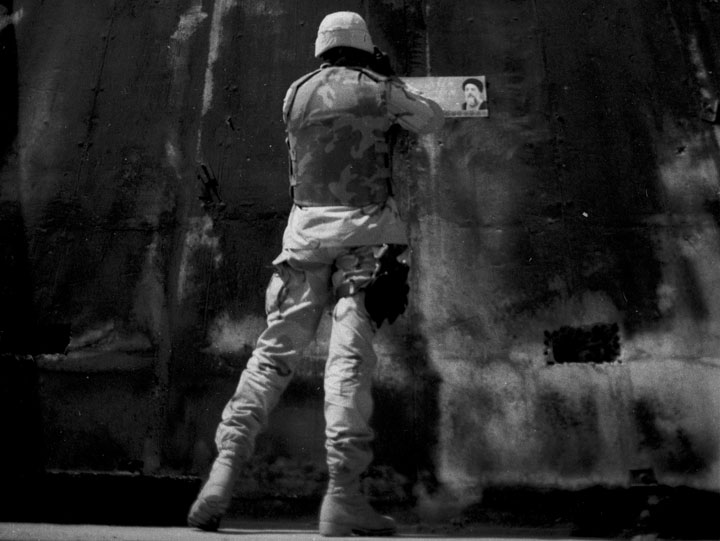 An American military intelligence officer photographs a sticker of Ayatollah Mohammed Baqir al-Hakim near Mustansiriyah University in Baghdad, April 2003. Hakim was the leader of the Supreme Council for Islamic Revolution in Iraq (SCIRI). As a “unilateral” (non-embedded) journalist I guess I did not have the required permission to take such a photo. Hakim was assassinated by a massive car bomb in Najaf a few short months later on August 29, 2003 outside the shrine of Imam Ali. It seemed as if the American military higher ups couldn’t quite decide who their enemies were. After shooting this photo, my fixer an I drove onto the campus of the university nearby and two young GIs pointed M-16s at our heads. When I told them in loud American English I was a journalist, they told me they couldn’t be sure my hilarious fixer wasn’t a secretive suicide bomber.  ©2003 Derek henry Flood 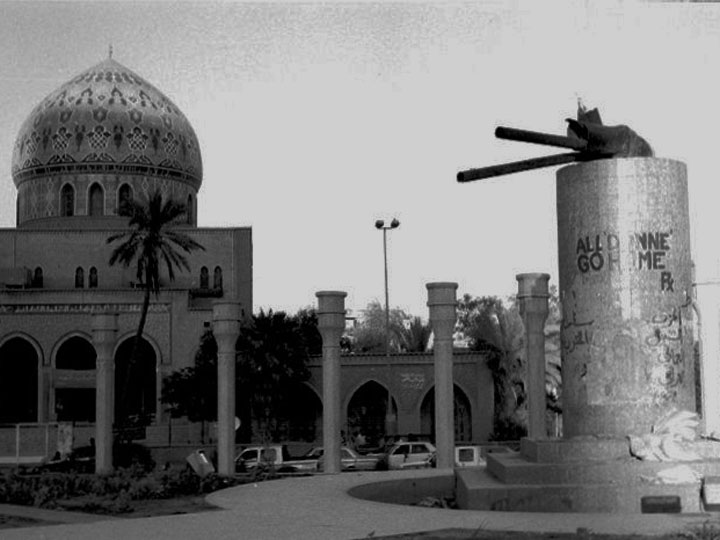 The ripple effects of the Pentagon’s aggressive de-Ba’athification agenda can be felt in Iraq today, well over a decade after the invasion/intervention/occupation/quagmire. De-Ba’athification for many was code for Sunni Arab marginalization that partly underlies the Sunni protest camps from Hawija to Ramadi. ©2003 Derek Henry Flood

← Enter the Fabled City
In Darkness →