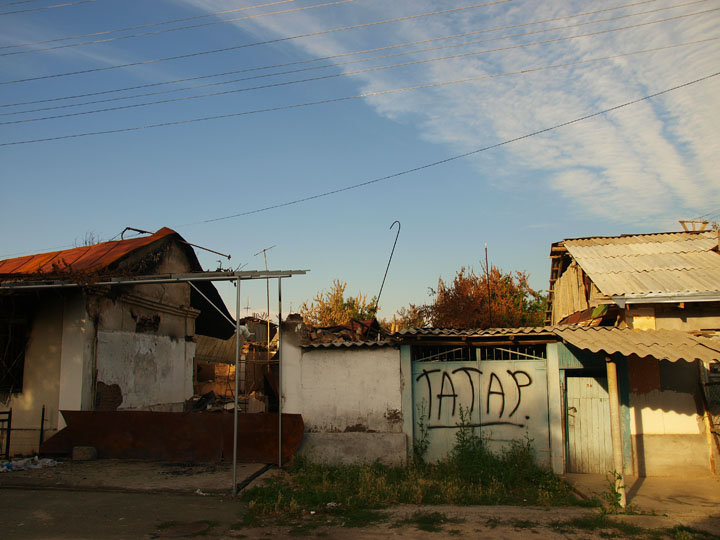 In order to not get their home burned in an anti-ethnic Uzbek pogrom in Osh, Kyrgyzstan in June 2010, a Crimean Tatar family spray painted “Tatar” on their gate as they evacuated their neighborhood while all the Uzbek-owned homes surrounding them were torched by Kyrgyz supremacists. Crimean Tatars were forcibly removed from the Crimean peninsula in what is now Ukraine. Like the Chechens, the Tatars of Crimea were deported en masse to Central Asia as a form of collective punishment by Stalin in 1944. Ten years later, during the post-Stalinist reign of Nikita Khrushchev, Crimea would be formally attached to the Ukrainian Soviet Socialist Republic. Ever since the Soviet Union ceased to be a reality, many of the successor republics have been riven with ethnic and nationalist violence. ©2010 Derek Henry Flood

New York- I appeared on BBC Arabic’s Newnight programme last week with presenter Malak Jaafar and Elena Suponina of the Russian International Affairs Council. The debate kicked off with the framing of the tension in Ukraine as one of the pro-EU Ukrainian-speaking, Catholic west of the country versus the more Orthodox east dominated by native Russian-speakers bordering the Russian Federation. But as we know, it is far more complex than that. Take in Ukraine’s own localized geopolitical and historic place:

Within its own region, Ukraine is a veritable geographic hub surrounded by once Soviet or Eastern Bloc spokes. Western Ukraine borders more recent EU accession states like Poland, Slovakia, Hungary, and Romania. But to the north western Ukraine abuts authoritarian Belarus, oft dubbed “Europe’s last dictatorship” where President Alexander Lukashenko has been in power for 20 years. On western Ukraine’s far southwestern frontier is the bizarrely anachronistic Soviet-esque ‘Republic of Trans-Dniester‘ a (also known as Transnistria) a sliver of land east of the Dniester River which broke away from Moldova after a brief 1991-1992 conflict shortly after the USSR’s dissolution. Northern Moldova proper borders Ukraine. And I suppose most notably, Ukraine borders the Russian Federation to its east which considers itself the hub and Ukraine one of its spokes.

Part of the spark for the EuroMaidan protest movement was now ousted President Viktor Yanukovych’s backing out of entering the beginning of an EU Association Agreement before the November 2013 Vilnius Eastern Partnership Summit under Kremlin pressure.

Georgia and Moldova, which both have Russian-protected secessionist regions, did initial the early stage of this framework which is meant to ease visa restrictions on citizens of the signatory states and encourage a broader free trade zone on the EU’s outskirts. But as the EuroMaidan crisis dragged on through December and January, the mood became increasing bitter.

After some 78 people were killed in Kiev’s now infamous square, a friend there messaged me to clarify: “now we don’t fight for Europe, we fight for our rights and democracy! We forgot about that association [agreement] with Europe.”

Alas, to say that the debate over Ukraine’s place in the geopolitical sphere can be neatly bisected into a compartimentalized east-and-west dynamic is not entirely useful as a starting point of argumentation. Though live television with its intensity and time constraints often doesn’t leave so much room for nuance. 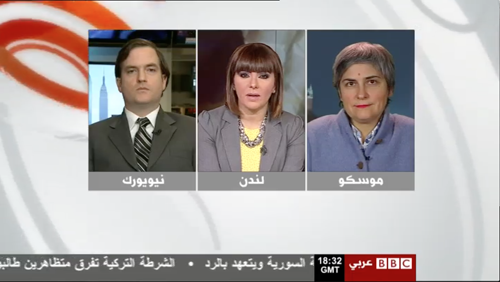 I tried my best not to fall into the trap of passé geopolitical clichés in the debate with Ms. Suponina.

On the broadcast I stated that I felt the immediate struggle for the future of the country was not a binary east-west one but that the immediate trouble would be between Kiev and Simferopol, Crimea’s capital in addition to the obvious conundrum of the port of Sevastopol being the home of Russia’s Black Sea fleet. The following morning, my concerns became an apparent reality.

The situation in Crimea has so far been a rather muted stalemate but the danger lies in Russian forces creating facts on the ground. while the international diplomatic community shuttles around. Ukraine’s acting president Oleksander Turchinov made an analogy with the Russian occupation of Abkhazia in a televised speech. A contact of mine in the Georgian diplomatic corps informed me that his colleagues in Tbilisi were watching events in Ukraine very closely and that such [predictable] Russian provocations were all the more reason for Georgian accession to NATO.

And while the comparisons between Crimea and Abkhazia are not perfectly precise in terms of local ethnic politics–no analogy is perfect–the overall Russian strategy may be read from the same playbook. Under the pretext of protecting a client population, Moscow may yet create another statelet while Kiev remains in disarray. Putin fears and loathes former Soviet states joining Western security and economic architectures, namely NATO and the EU in Brussels. He seeks to re-create a realm under his own control be it the Customs Union or the Eurasian Union. He had hoped to twist Kiev’s arm into joining the Customs Union but EuroMaidan did away with all that.

One clever thing Mr. Putin has done is that by keeping states once ruled by Moscow divided and with Russian troops on their territories, it has made Western decision makers tepid about full integration with these states. Ever fearful of an actual direct hot war confrontation with the standard bearers of the Kalashnikov–something that was avoided during the most arduous years of the Cold War, no Western military is at all eager to challenge Russian forces on land or at sea. Integrating Moldova into the EU or Georgia into NATO is tricky when leaders in Brussels must think through the ‘Russian troops factor’ the the breakaway territories of those two states.

Now Ukraine–which already had the Russian Navy more or less peacefully being hosted on its territory–may indeed be grappling with an incipient yet irreversible future frozen conflict if the crisis in Crimea is not immediately resolved. What happens in Ukraine today may well affect Georgia, Moldova and other vulnerable post-Soviet states with unresolved issues from the 1990s that the Kremlin can turn to its advantage opportunistically if need be.

I remember speaking to a Moldovan diplomat last year who described growing up outside Tiraspol and how she lamented the essentially lost idea of a truly united Moldova. Putin may not at all be an eloquent uniter, but he is an agile divider in the post-Soviet periphery. 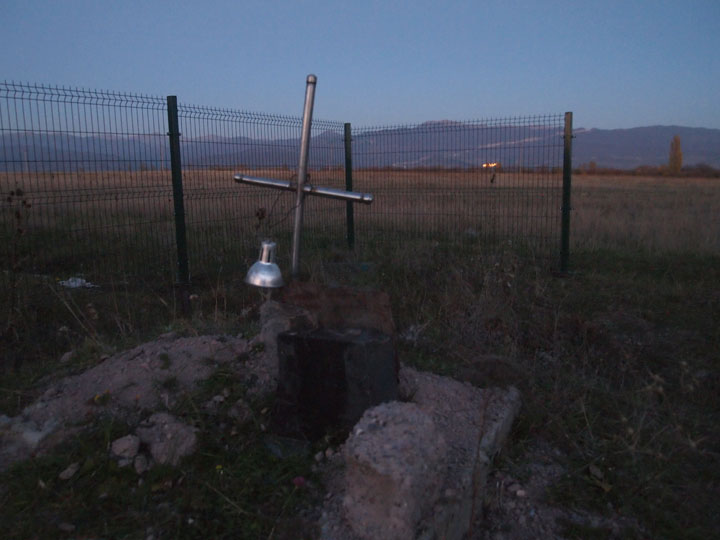 An unfinished fence built by the FSB dividing agricultural land outside the village of Ditsi in Georgia’s Shida-Kartli region. Georgian security men told me the lights off in the distance were those of a Russian military base in clear violation of the 2008 six-point peace plan brokered by the EU. Some fear that that Moscow may use the model employed in Georgia in August 2008–a pretext of averting ‘genocide’–to cleave the Crimean peninsula off from mainland Ukraine. Though South Ossetia is nominally an independent nation-state as recognized by Russia, it is in essence an occupied adjunct of the Russian Federation. ©2013 Derek Henry Flood

← Anbar-Insurgency Redux
Between Propaganda and Reality in the Caucasus →