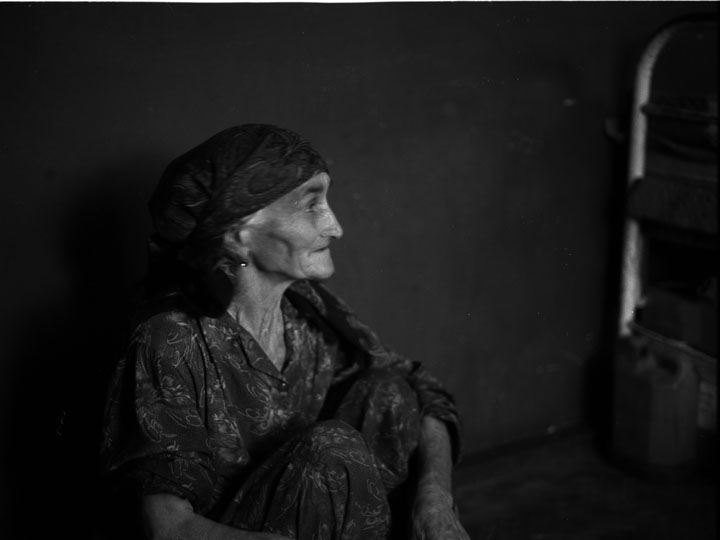 An elderly refugee from southern Chechnya’s Itum-Kale district sits in the home of a Kist host family in Duisi, Georgia. I was struck by how incredibly hospitable these people relentlessly vilified by the FSB were. They told me of the horrors of Putin’s onslaught on their villages while offering endless cups of tea and bread me. I felt powerless, having nothing to givein return  but a sympathetic ear. ©2002 Derek Henry Flood

New York- I have an article out in this month’s edition of the CTC Sentinel about the evolution over the last two decades of the fight for the North Caucasus which has morphed a great deal. In my view, Syria has been a game changer with regard to Chechens and other ethno-linguistic nationalities from that region fighting with abundant documentation outside their homeland. I first encountered members of the Chechen community in Georgia in 2002. The stories of their under reported struggle fascinated me. 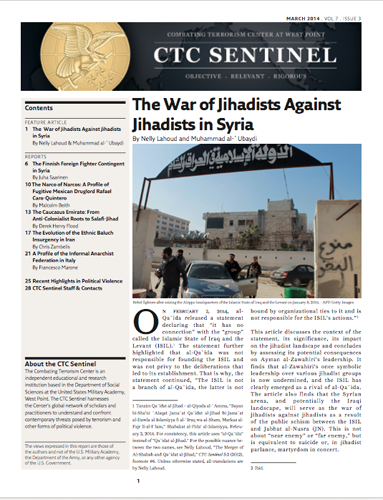 Personally, I was in an early career lull between 9/11 back here in NYC and covering the Afghan war yet before the Iraq would begin in 2003. I was roving around the Levant and the Caucasus in the summer of 2002 looking for original stories to cover on my own. Sure there were the mostly crude analogies to Soviet-occupied Afghanistan of a grass roots holy war being fought by righteous bearded guys against cruel, drunken Russian officers and their hapless young conscripts, but I wanted to meet ordinary people whose lives were gravely affected by the war that solidified Putin as the Russian Federation’s post-Yeltsin czar.

I’d wanted to meet Ruslan Gelayev (an infamous side-witching warlord present in northeastern Georgia at the time) and perhaps travel with his mujahideen unit onward to Ingushetia and Chechnya. I ultimately decided that the risk didn’t measure up to the reward, particularly in the case of being a freelancer with a story no one in the West much cared about anyway. I also wanted to make sure I was back in New York to document the one year anniversary of 9/11 which was of paramount importance at that time to me.

I settled for trekking around villages populated with refugees who had crossed from souther Chechnya in the autumn of 1999. I ended up staying in what I determined was basically a hostel for foreign volunteers heading northward through the ravines of the Greater Caucasus range to wage war against a dehumanized enemy.  Russian soldiers and officers from various federal organizations like the OMON were portrayed as soulless cannon fodder in muj propaganda videos produced in the GCC which were used to draw attention to the fight for Chechnya among Arab audiences. These videos–some of which I were shown by Chechens in Tbilisi–painted the conflict as a righteous cause. The whole situation was a mess and Georgia itself was in a state of contained chaos back then.

One of the major points I have tried to make in my new piece is that propaganda has–over time–become a kind of new reality. From the fantasies of the Lubyanka to the web forum hosts of the Gulf, Chechens are other North (and South) Caucasians are now really, undeniably fighting abroad. I remember being at a terrorism conference in Washington in the mid-2000s and a young Marine officer stood up during a Q & A session and spoke of his unit having fought ‘Chechens’ in Iraq. But when pressed, he had no method of verifying this. Of course there are Chechens who are semi-indigenous to Iraq from their expulsion to the Ottoman empire–though that nuance was rarely, if ever, mentioned. Then there were the stories of Chechens fighting ISAF troops in Afghanistan and the Pakistani Army encountering Chechens in various battles in the FATA. But not one of these assertions was ever proven with even a shred of evidence. 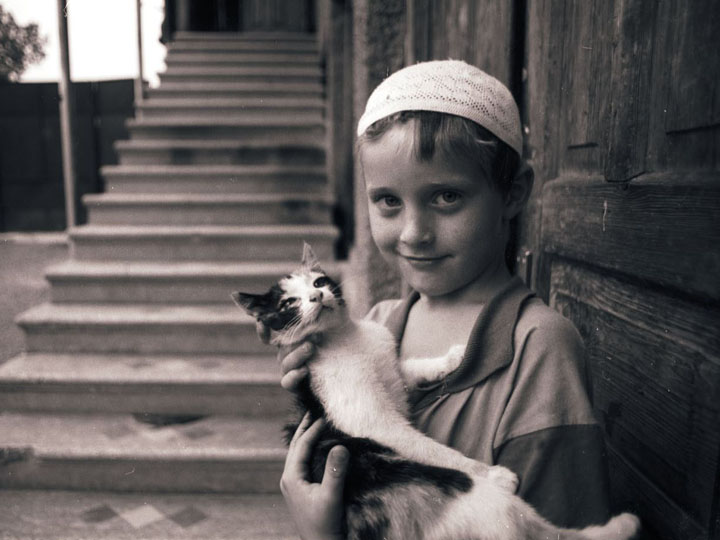 Ismail with his scruffy cat in the village of Birkiani. He was a young refugee living in limbo like thousands of others. Though there was condemnation of all-out war in Chechnya at the time, there was no real action to back it up. Or should I say nothing ‘actionable’ was ever done. Challenging so-called tin pot regimes in weak states was acceptable and even fashionable for a time among liberal internationalist and neoconservative circles for a time but challenging Russian neo-imperialism directly has never been on the table. One could even draw a continuity between inaction on the Caucasus then and Crimea now. ©2002 Derek Henry Flood

Now, however, Chechens (many coming from the EU or those who were already present in the Arab world), Dagestanis, Azerbaijanis, Georgian Kists, Tatars and all sorts of other guys are indeed fighting in Syria. It is as if the FSB and GRU’s dream has come true…albeit over a decade too late. This situation serves several interested parties but in my view does a great disservice to the Chechens themselves. As a colleague and friend messaged me earlier this year: “[It is] sad what has happened to my people.” 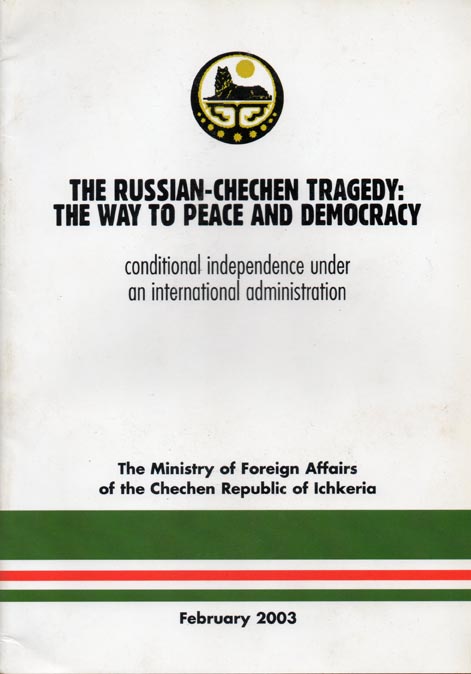 A peace plan forth by ChRI’s Ilyas Akhmadov which went essentially nowhere. By 2003, it was far too late.

When Chechen rebel officials were asking for the internationalization of the situation in their republic, they were ignored. When moderate Syrian rebels asked for a no-fly buffer zone along the Turkish border, they were ignored. Then when these places descend into nihilism, people condemn them devoid of context.

The Chechens were villains in poorly scripted Hollywood films and novels but the reality has always been they were mostly an embattled people consumed with the fight for their own homeland as a opposed to global salafi-jihad in general. A pillar of this sort of thing was the Islamic Emirate of Afghanistan (ie the Taliban) recognizing the Chechen Republic of Ichkeria (the rebels).

This move of non-state diplomacy served to benefit neither party. The Taliban wanted to be recognized worldwide well beyond the just littoral states of the Arabian Sea and when their efforts were rebuffed, they recognized the ChRI government. Moreover, the late Aslan Maskhadov, who was then president of the ChRI, was less than thrilled with the Taliban recognition and apparently believed it to be a play by Zelimkhan Yandarbiyev and Movladi Udugov to strengthen their position within a growing rebel schism.

The outside world’s contempt in the form of apathy for the horrors perpetrated in Chechnya with it relegated to an “internal affair” for Moscow to resolve struck me as simply sad. Interventionists patted themselves on the back for aleviating suffering the Balkans and lashed themselves (to a far lesser extent) for doing nothing in Rwanda,  while they let the internal affair in the Caucasus fester for years.

In other news, my CTC Sentinel article on Syria from 2012 was cited The War Report: 2012, edited by Stuart Casey-Maslen, published by Oxford University Press and an interview I did with a top former Afghan police official was cited in Policing Afghanistan: The Politics of the Lame Leviathan by Antonio Giustozzi and Mohammed Isaqzadeh by Columbia University Press. 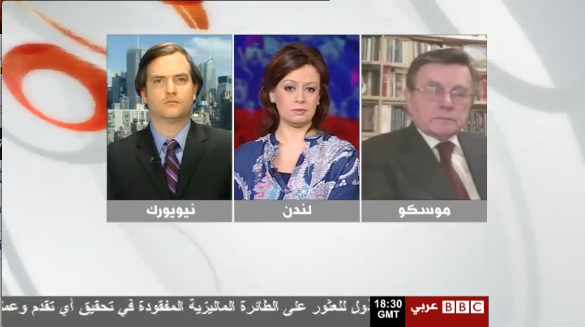 I appeared on BBC Arabic on March 22 with presenter Rasha Qandeel and former Russian diplomat Vyacheslav Matuzov to discuss Russian’s foreign policy of protecting its external minorities. I pointed out what I see as a staggering hypocrisy in Russian policy with regard to internal minorities within the Russian Federation and Moscow’s military adventures in the post-Soviet space.

← The Novye War for Crimea
Degrees of Separation →