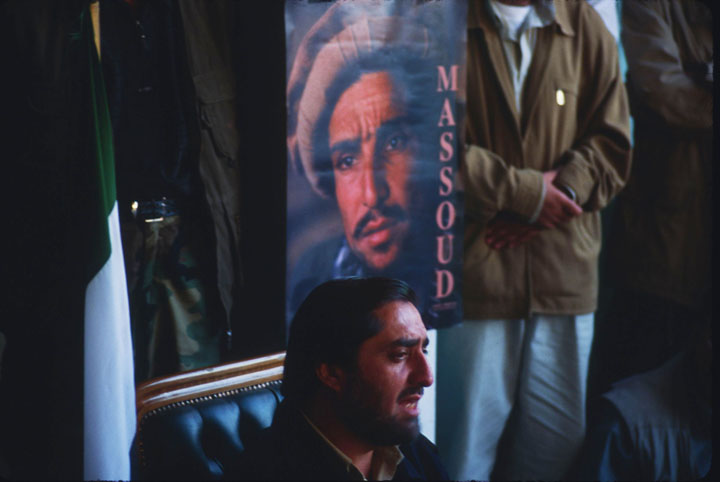 Abdullah Abdullah holding a press conference in the garrison town of Khoja Bahauddin in Takhar Province abutting Tajikistan in early November 2001. Note the Massoud poster hovering in the background. I recall Abdullah as stoic while the overthrow of Mohammed Omar’s Islamic Emirate seemed far from an absolute certainty in those chaotic early days of the Western intervention in Afghanistan’s ongoing civil war. That stoicism has remained with him over the ensuing years. ©2001 Derek Henry Flood

New York- With the partial election results from the April 5 vote trickling out from the Independent Election Commission (IEC) along Jalalabad Road on the edge of Kabul favoring Abdullah Abdullah, the world may witness the first peaceful transition of state level power in Afghanistan in post-royalist  modern day history. Though Abdullah does not appear to have the absolute majority required under the Afghan constitution (50.01%), he maintains a healthy lead with an estimated 44.9% vs. Ashraf Ghani Ahmadzai trailing with 35.8% and Zalmay Rassoul far behind at around 11%. This will likely lead to a runoff election in late May as Abdullah and Ghani have no interest in forming a coalition as yet.

Hamid Karzai has effectively been in power since the conclusion of the Bonn Agreement in December 2001 when he was perceived as the West’s man in Afghanistan. How times have changed.

As Karzai grew increasingly erratic, paranoid, and hostile to donor nations who had troops occupying his country over the years, he seemed to become a rather reclusive creature of the presidential palace in Kabul’s fortified green zone. If Abdullah were to take power that would upend the ethnic calculus of foreign diplomats and intelligence agencies following 9/11 that the head of state must hail from a Pashtun tribe, preferably from the south. Abdullah, while being half Pashtun, is generally thought of simply as a Tajik with his partnership with Massoud that painfully ended on September 9, 2001.

The Americans and their allies felt that ethnicity should trump other traits in Afghanistan in order to placate the agrarian populace from whom the Taliban emanated in the mid-1990s. Similarly, these same people strongly felt that the leader of a post-Saddam Iraq must be a Shia in order to properly represent that country’s oppressed majority. In that regard, the two principle democracy export projects were not genuinely democratic at all. If these disastrous neoconservative legacy projects had been truly democratic in nature, than an Uzbek or Tajik should have been able to theoretically be the leader of Afghanistan and a Kurd or Assyrian the leader of Iraq. Instead, American and various participating EU member states’ policies did nothing but reinforce preexisting notions about what should be the mother tongue of the imposed national leader or what sect he must belong to in order  to satisfy the electorate. 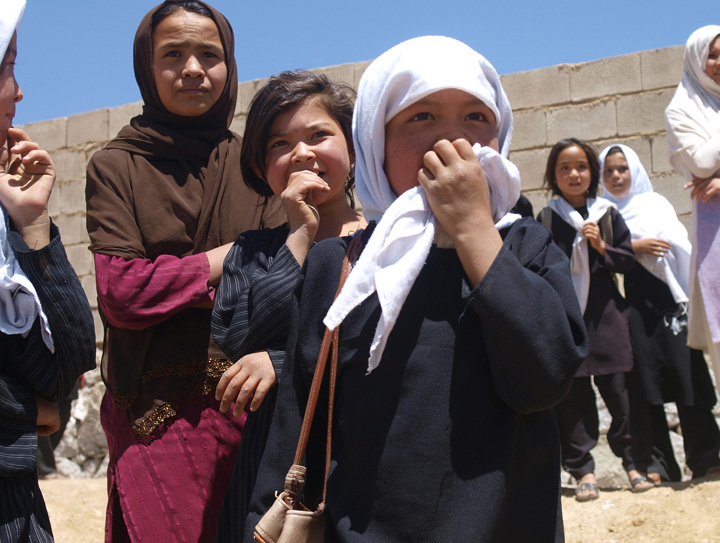 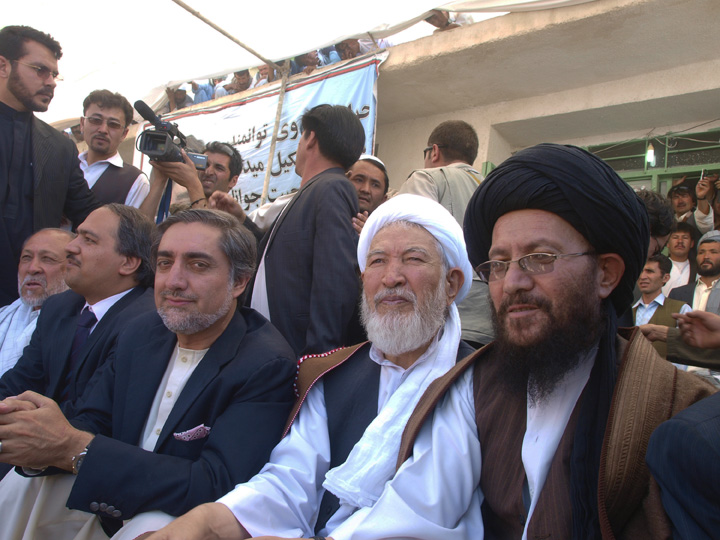 Abdullah on the campaign trail in Ghazni Province, in the Hazarajat region August 11, 2009. Though the Afghan conflict is primarily painted along ethno-linguistic lines in terms of warlords and their corresponding patronage systems, there is also the Islamic schism whereby politicos from Kabul try and curry favor to get out the Shia vote. Not nearly as stark a sectarian conflict as that in Iraq, for those familiar with the history of 1990s Afghanistan, the sectarian factor played an important role in the conflict. In Ghazni, ethnic and sectarian interests overlap. ©2009 Derek Henry Flood

For Washington, moving past Karzai is critical in light of its failure to reach a Bilateral Security Agreement and NATO n=unable to hammer out a Status of Forces Agreement regarding the presence of foreign troops beyond the slated withdrawal date come the end of the current year. Both Abdullah (above) and Ghani (below) have indicated they will sign such agreements if in power. For all of the effort that has been put forth and lives lost, the Taliban have never been effectively quelled. The U.S. may be tamping down its planned-for forces numbers from 10,000 troops to possibly closer to 5,000 or less according to Reuters.

One should hope that a new leader will bring a modicum of progression to Afghanistan’s internecine affairs. But Abdullah was Massoud’s deputy-the Taliban’s archenemy on the battlefield-and Mohammed Omar is still at large unlike bin Laden and it is unlikely his most strident foes will have forgotten that. Look what they did to Burhanuddin Rabbani after all?  Almost exactly a decade on from the killing of Massoud by Maghrebi jihadis in Khoja Bahauddin, a Taliban turban bomber struck the former president. Grievances are seldom forgotten, particularly when truth and reconciliation have never been achieved in a land as pained as this one. 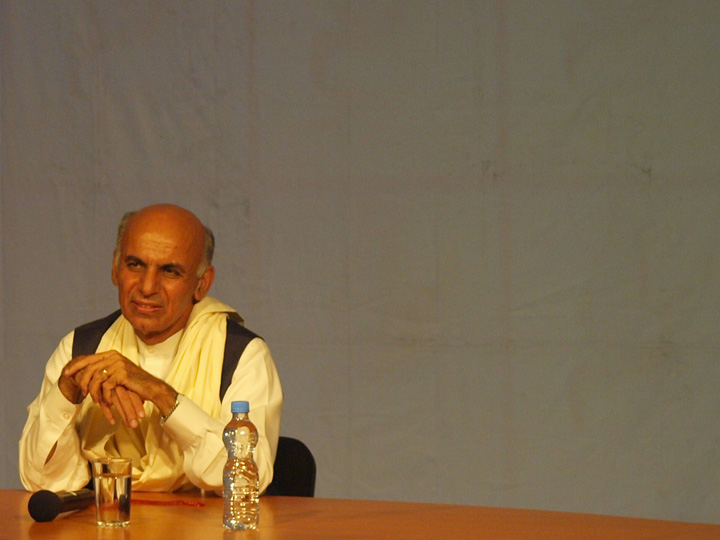 For there was never unanimity among relevant players (Pakistan, and even Iran in certain circumstances) about how Afghanistan should move forward beyond the formal collapse of their Kandahar-based movement in November-December 2001. This goes into massive geopolitical tangents about not having a proper mechanism to resolve once and for all the simmering Kashmir conflict between Pakistan and India to say nothing of the Kashmiris themselves and China and the enmity between Iran and Pakistan. With bizarrely-ruled Turkmenistan officially ‘neutral’ and Uzbekistan and Tajikistan in varying degrees of stultified dictatorship, Afghanistan is and will remain a geopolitical laboratory for some time to come.

But if it can move beyond its leader in power since January 2002, that will be a step beyond the predicament in Iraq where Maliki is seeking the 3rd term in a vote a few days from the time of this writing that may likely further ensconce the bloodletting there while hindering political progress verging on the dictatorial. 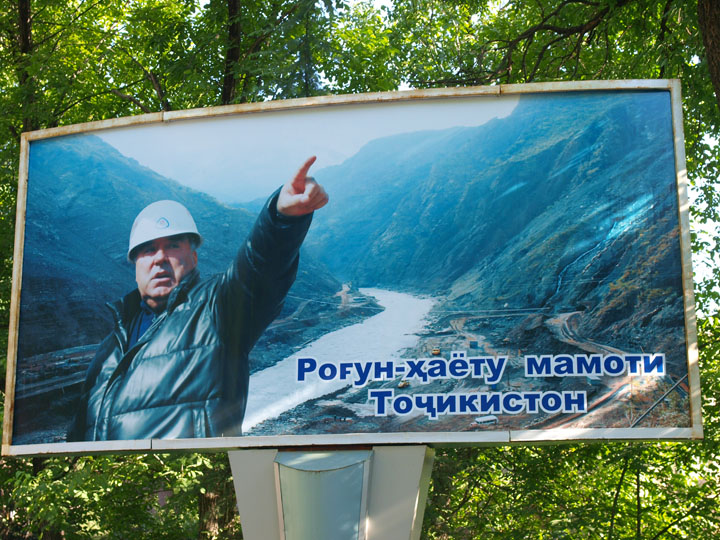 Tajikistan’s Emonali Rahmon urges/implores his subject-citizens to invest in his Rogun Dam mega hydroelectric project, infuriating Uzbekistan’s Islam Karimov in the process. With Tajikistan still being such a weak nation-state since my first visit in 2001, it cannot orchestrate any effective foreign policy towards its southern neighbor. This in my view is to Dushanbe’s great detriment. ©2010 Derek Henry Flood

The measures of progress in Afghanistan can be interpreted through a wide array of prisms. Below I am using the images below to make a simplistic,  unscientific contrast based on my own frustrations derived from visual observations rather than data points.

Does progress establish order or is preexisting order necessary to foment progress?

What is the connection between the disparate images below? The plot to destroy the World Trade Center and the massacre of the Shia Hazara people of central and northern Afghanistan stemmed from parallel jihadi milieus operating in southern and eastern Afghanistan simultaneously-Deobandi Taliban and Salafi Arab. So a shiny new tower rising from the ashes in lower Manhattan and the Hazara living in relative peace are in fact very much related imagery.

Call it an unfair or crude comparison perhaps, but the contrast between the reconfiguring of New York’s World Trade Center site, as painfully and unnecessarily long as it has been taking (think how fast a similar feat would have been accomplished in Dubai or Shanghai without unions or human rights for laborers factoring in), with how much money has been poured into Afghanistan and how little has been done there with relation to infrastructure and it is quite simply a pathetic affair. So many dusty roads in Kabul are still not even paved. Yes a degree of progress has been made in Afghanistan but it does not amount to much in relation to what has been donated/grafted/spent. ©2014 Derek Henry Flood 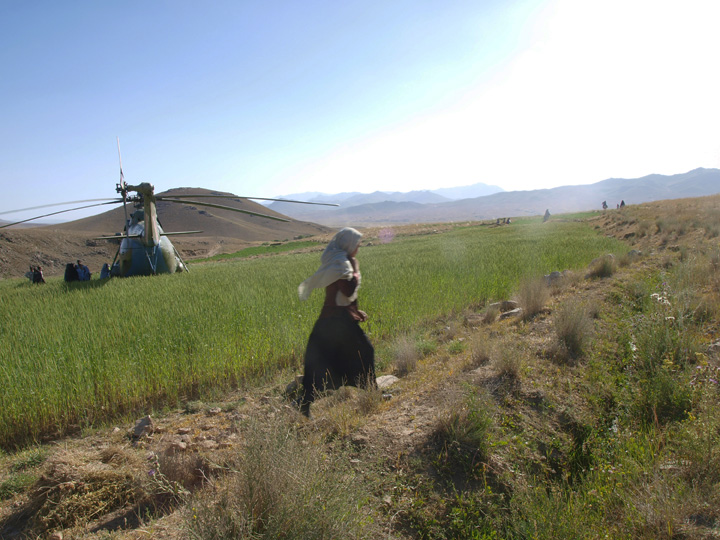 Take Daykundi Province in central Afghanistan for example. So many years after America and the West felt compelled to enter Afghanistan in the wake of 9/11, we had to go there by helicopter because roads were either nonexistent or entirely insecure. That leaves the country reliant on the old, insurgent ridden ring road that isolates the Hazarajat and undermines economic integration with neighboring states. Granted its physical geography certainly plays a role, but the Soviets engineered the Salang tunnel after all. Progress is possible if order were to be enabled. ©2009 Derek Henry Flood