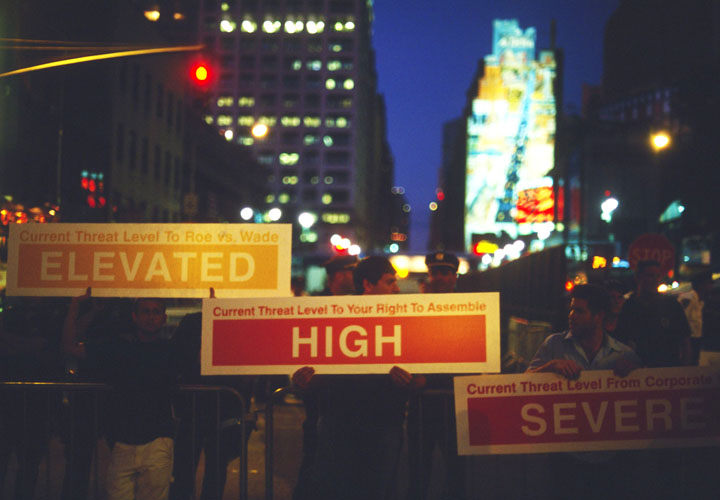 On the night of August 30, 2004, anti-Republican protestors march outside New York’s Madison Square Garden. I photographed hundreds upon hundreds of protestors and these guys had far and away the most imaginative signage. I love this photo. This was a fleeting moment where they held the signs they’d created perfectly and yet were looking in three different directions. This was when I was lagging behind the competition and still shooting analog. ©2004 Derek Henry Flood

New York- As I attempted to chronicle the major events of the first decade of the 21st Century, I scurried all over the world applying for visas through arcane processes at hard to find embassies and consulates, felt the thud of earth shattering ordnance , and did my best to get an intellectual grasp on all that was unfolding around me. Most of what I had shot in New York revolved around events at Ground Zero, but this milieu of civil disobedience was something different yet ultimately related to 9/11 in the larger scope of things.

In late August 2004, a time that was arguably the zenith of neoconservative power with Bush on the cusp of his second term, conservatives were rallying in New York of all places. According to its detractors New York was/is  the cradle of comparatively liberal media save for Murdoch’s media properties. But New York was also where 9/11 principally happened which neoconservative operators used to consolidate their hold on executive power in D.C. In other words, these were strange days in the city.

That year I pragmatically stayed home to financially recover from the chaos I’d created for myself from 2000-2003. Wars don’t wait and when you run off to one after having made a decision from one day to the next, it is to your own detriment upon your return home unless you come from an old money or nouveau riche background.  So that year I looked inward to shoot a story at home and along came the Republican National Convention protests that August.

On August 30, 2004, I followed hordes of people from Dag Hammarskjold Plaza to Madison Square Garden where the convention was being held. Next thing I know I was shooting shoulder to shoulder with James Nachtwey, Antonin Kratochvil and many of the other war photographers from the VII and Magnum agencies (all with the latest digital SLR cameras bestowed upon them by corporate sponsors I guessed).

I was in a weird place with relation to money and technology: I could get to events and shoot them but as I was an analog holdout I couldn’t compete with everyone else who’d already long since made the switch to digital well before Iraq in 2003. I could just afford to shoot and develop actual film but not buy a digital body and lens kit. Meaning that I couldn’t file ultra competitive breaking news stories. I therefore had to take a long view of history as it was happening since while I had the access to world events, I didn’t have the technology to get my work out there at the time. So I have this large analog film archive that I treasure to this day.

By August 2004, the Iraq war was in full swing with American troops battling Jaish-e-Mahdi men in Najaf while the Afghan war was a forgotten backwater. Even though New York and DC were attacked by salafi-jihadis on 9/11, GIs were somehow fighting Shia militiamen instead. Sure I’m being rather simplistic in pointing that out, but purposefully so. 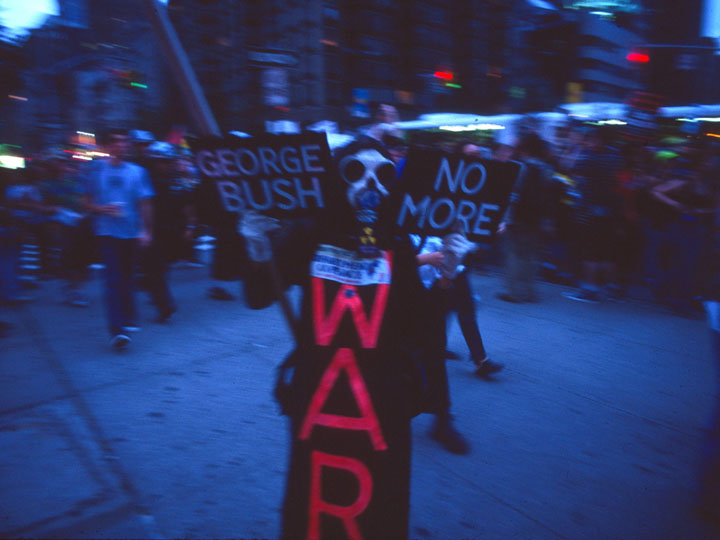 While milling through the throngs of people, I tried to find the most creative protestors of which this person on Manhattan’s 8th Avenue was one. An all-enveloping get-up that was akin to a Halloween costume. After a dozen years of relentless Bloombergism and gentrification, I can scarcely imagine a scene like this happening today. Perhaps it still could a la Occupy Wall Street but these days of rage during the height of the Bush era feel so far away now. ©2004 Derek Henry Flood