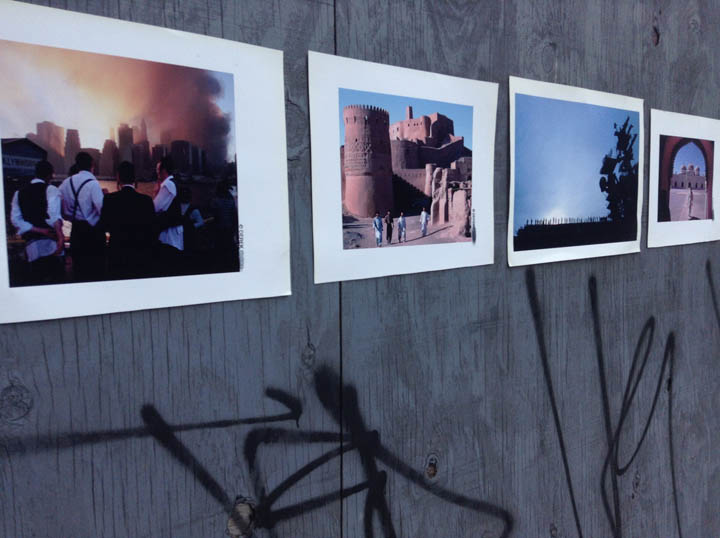 A close up of my art installation in Queens, New York’s Long Island City neighborhood. From left to right: 9/11 as seen from Brooklyn, the Arg-e-Bam (before its destruction in a 2003 earthquake) in Kerman province, Iran, the USS Nimitz in Coronado, California shortly before the 2003 invasion of Iraq, and the Abassi masjid next to the Derawar Fort in the Cholistan Desert, Punjab Province, Pakistan.

New York-The other wekend I finally got around to a rather simple task that I’d wanted to do over a decade back. Before 9/11 I had a vision of doing guerrilla art installations around New York and other major Western cities to explain to the rest of the world (or at least urbanized Western city dwellers) about what was going on in Afghanistan well beyond the bellicosity of the Taliban movement and its international critics. Afghanistan at that time was incredibly isolated in terms of the global economy and its discordant political representation abroad. I wanted people to understand Afghanistan in a pre-1979 sense.

I was inspired by the splendid per-war imagery of a Vermont-based photographer named Luke Powell who’d shot vivid landscape images of Afghanistan’s valleys and monuments that conveyed a powerful message about the country’s history and culture in a way that no day-to-day news image of war and pestilence ever could. What was remarkable to me about Powell’s photographs was that I found pirated versions of his prints hanging in the bazaars of Peshawar, Chitral, Quetta and so forth. His images had credibility amongst Afghans themselves as well as Pakistani bazaaris.

I had wanted to emulate an updated version of this concept and combine it with the illicit poster art craze of the late 1990s and early 2000s to create and artistic meme with a message.  Beauty with a subtle educational agenda. I was in sporadic communication with the Taliban before 9/11 in hopes of them granting me access to the territory they controlled literally or nominally. 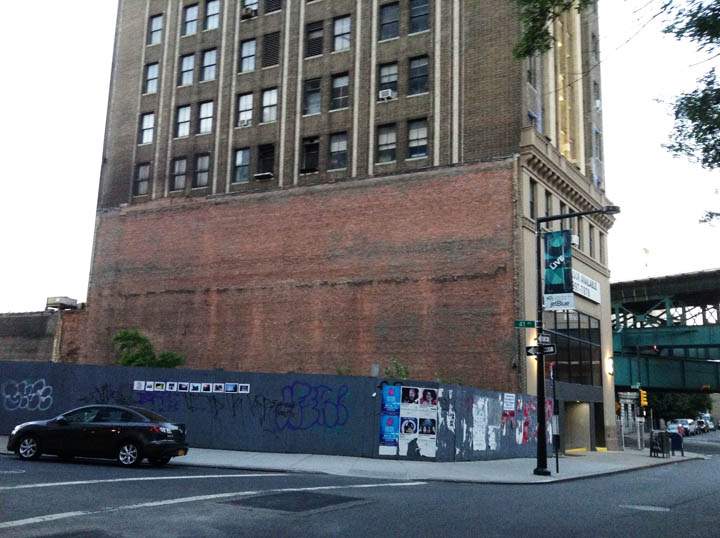 Imagery in the urban ether.

Then I woke up one morning in September and was suddenly inhaling ash pedaling as fast as I could muster to the World trade Center. In an instant I went from being a pragmatic idealist to a witness to the brutality of our living history. A series of rather absurd starkly bifurcated polemics would quickly follow: the 9/11-everything-changed-sts and the 9/11-nothing-changed-ists and the with-us or with-the-terrorists.

I still have not entirely given up on those original ideas, just procrastinated to the point of near abandonment. I was looking for something in a dusty drawer and came across these old prints from 2000-2003 which were beginning to yellow ever so slightly at the edges. I finally went to slap them up in a nondescript locale. Better late than never as is said.

I still hope to do a coffee table book of the best of these prints someday but rather than with an über cool northern Italian, London or Brooklyn-based publishing house I will most likely self-publish The Fabled City (as my project was known before 9/11). As I’m not even remotely close to being a famous photojournalist in that industry’s coveted inner circles, self-publishing via Blurb or something similar is probably the only way forward for me at this point. I see this initial installation as a step toward–a gateway if you will–that goal.

← Beyond Polemics
Moldova Navigating Between East And West →