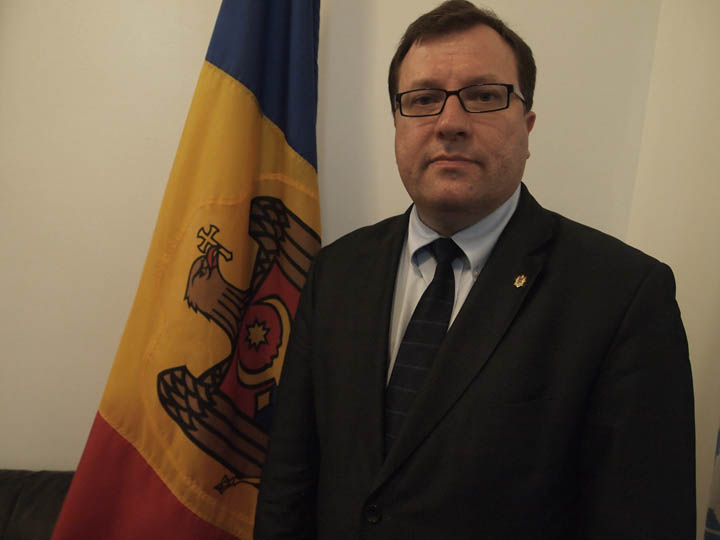 New York- I recently interviewed Ambassador Vlad Lupan, Moldova’s Permanent Representative to the United Nations, here in his Manhattan office for IHS Jane’s Intelligence Review (subscription required).  Though the finished product was a succinct summary of the present day challenges Moldova faces between Putin’s incipient Customs Union project and the hopes of its Western-leaning coalition government of joining the EU’s common market, our discussion went far beyond the first half of 2014 and the upcoming signing–along with Georgia–of the EU Association Agreement this week.

Our lengthy discussion into some detail on the ‘frozen’  Transdniester conflict along Moldova’s eastern frontier with Ukraine as well as the nature of the Turkic Gagauz minority’s autonomous politics in Moldova’s southeast. Moldova is a country often little understood in the broader Western mind (and is still referred to by some rather anachronistically as ‘Moldavia’ which can result in a degree of collective confusion).

One of Ambassador Lupan’s concern’s involved the influence of pro-Kremlin or outright Kremlin-controlled media outlets. As his country grapples with the prospect of broader European integration, Moldova’s separatist-minded peoples or those hailing from rural or elderly demographic cohorts holding on the the vestiges of what he termed “Soviet nostalgia” may feel that they have much to lose should their state turn its back on Russia by leaning too far West too rapidly. s We’re witnessing to this wistfulness for a Soviet time gone by to some degree in swaths of Ukraine’s industrial and mineral-rich Donbas region in a good many media reports this year.

Ukraine is currently plagued by an incredibly unhelpful lexicon that draws from everything from the battle for Stalingrad to the Russo-Chechen wars. With competing sides painting their opponents as ‘fascists‘ and ‘terrorists’ respectively, a civil society-based solution to the crisis-cum-conflict seems increasingly unlikely from a pessimistic-inflected vantage.

The Republic of Moldova most certainly has a stake in the outcome of events in Ukraine. The port city of Odessa is Transdniester’s oxygen valve to the wider world. After Crimea, Tiraspol’s retrograde Soviet-esque authorities have made known their separatism for accession to the apparently now expanding Russian Federation.

Though a non-contiguous sliver of land that cannot connect to Russia unless all of Ukraine were to somehow become a constituent region in a kind of Crimea scenario writ large, perhaps Transdniester elites  imagine their unrecognized state as an outpost of Russian rule akin to Moscow’s Baltic exclave of Kaliningrad. Kaliningrad currently sandwiched between EU and NATO member states Poland and Lithuania. exists today essentially as a geopolitical relict of the aftermath of the Second World War

Between the agreement to be signed this week and elections scheduled for the end of November coupled with no end in sight for the violent conflict in its eastern neighbor, Moldova may be entering a period of heightened uncertainty as its pro-EU leadership attempts to move toward Brussels while Putin’s Customs Union awkwardly coalesces.

← The Gateway
Iraq Again and Always →