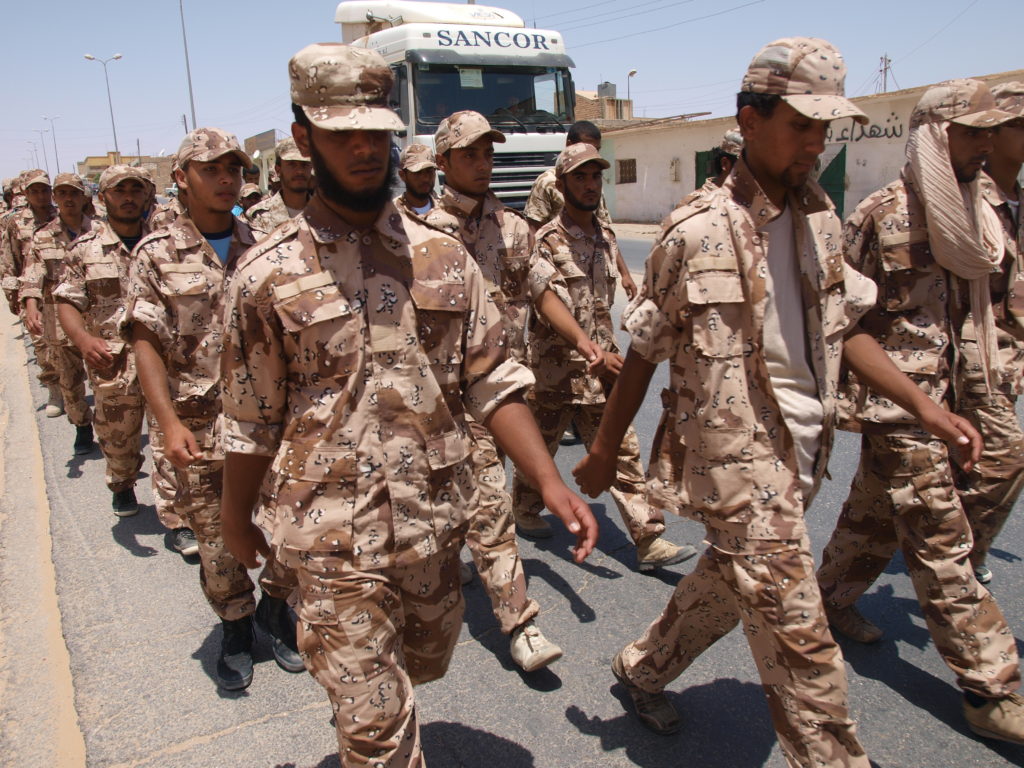 Then fresh recruits for the Zintan militia training in downtown Zintan on July 26, 2011. Once Qadaffi ultimately fell that autumn, most of the world took its eye off of events in this vast North African country. It was to our peril. ©2011 Derek Henry Flood

New York- How did we get here? This is what you may be wondering with the news today that a group of 21 Egyptian Copts were mass beheaded in an unspecified area of coastal Tripolitania by salafi-jihadis in Libya that pledged bayah (oath of allegiance) to Abu Bakr al-Baghdadi’s Islamic State a continent away. Like my recent post on the revolution lost in Syria to anti-everything elements, Libya was a place in 2011 that, while incredibly dangerous, welcomed journalists in droves.

Nearly a decade after 9/11, the Tunis and Tahrir revolutions ushered in a new wave of journalist wunderkinds, several of whom are today well established while still not yet 30. Now Libya is a hostile place across the board riven by parallel governments concomitantly claiming to be the legitimate rulers while salafis move in and operate freely. I would perhaps return to Libya, but with far greater caution than during my trips in 2011.

With the news of the Copts’ execution, there may be am even larger state actor moving into the fray. Egyptian President Abdel-Fattah El-Sisi has stated that Cairo has the right to “retaliate” in what would transparently be an act of revenge..if Egyptian security forces could discern who carried out the executions. The Egyptian air force, along with that of the UAE, already carried out bombing runs last August to smash Islamist weapons caches in and around Tripoli to no avail.

Egypt has been deeply intertwined in the Libyan remittance economy for decades. I recall speaking to my uncle in Heliopolis in March 2011 who had been a geologist for the Libyan petroleum industry in the first half of the 1970s. He described lightly-populated Libya as a migrant worker “colony” of the Nile Valley dwellers who left their densely people region to send much needed cash home to their families in Anwar Sadat’s Egypt.

Egyptian migrant workers gleefully fleeing the frontline in Brega, Libya on March 2, 2011. Though they depended heavily on Qaddafi’s petro economy for remittances, they were eager to cheer on the rebels considering the lack of leverage in the war. ©2011 Derek Henry Flood

The gruesome IS video reportedly alludes to “Rome” in the context of the medievally framed apocalyptic prophecy regarding the village of Dabiq in Aleppo Governorate. In IS propaganda, Rome symbolizes the West as a whole, the lands of ancient Christendom, and frankly anyone deemed kufr in IS’s takfiri thought world. The group has tightly shrouded itself in the mantle of the Judgement Day speak as part of its purported belief to be defending the prophet and the ummah as a whole. A battle for the town of Dabiq would spark the ushering in of the end of days in which Constantinople and Rome would fall to ‘the Muslims’ (orthodox Sunnis only).

Seeing as Libya was part of ancient Rome (see Cyrene and Leptis Magna), and in the early twentieth century the Italians colonized Libya, their reference to being “south of Rome” is duly a calculated one meant to get Libyans themselves onto their agenda. Should Egypt formally enter the battle for Libya, it will likely only complicate that mess further. The Egyptian state is struggling in Sinai these days with regular attacks on the military there demonstrating the lack of knowledge of the physical and human geography on the Peninsula. I’m not sure what purpose it would serve to have the Egyptians expand their failing war on terror into their western neighbor. For the Coptic hostages, it is too late.

← Looking Back at Lebanon
A Home in Defence →