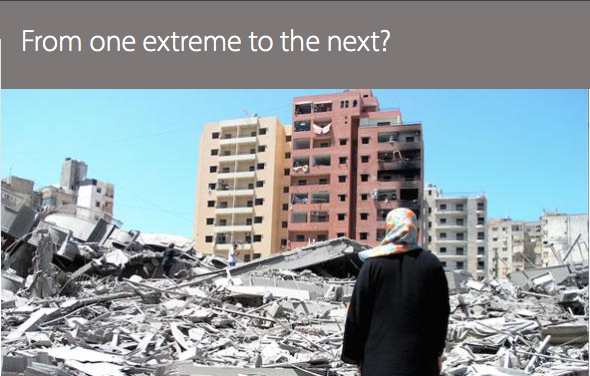 New York- I have a photo of the Israeli destruction of Haret Hreik, Lebanon from the UN-mediated ceasefire in August, 2006 in the new issue of Research Horizons magazine published by the University of Cambridge. Haret Hreik, a souher suburb of the Lebanese capital, has been called Hezbollah’s “strategic quarter.”

My image accompanies an article that explores the history of thelong defunct  tawheed (“oneness” or “monotheism”) movement in Tripoli in the early 1980s and how it compares deleterious Islamic State organization that is festering in Iraq and Syria at present. Some researchers have been looking back at Lebanon for possibly useful parallels to Syria today.

Lebanon today is once again in a precarious historical position. What has shifted is instead of being the locus of instability, it is at risk from its inevitable spillover since the once tightly controlled Ba’athist Syria began disintegrating in 2012. Lebanon’s polity has been greatly affected by the unabated chaos next door with the influx of refugees coupled with the outflux of fighters into Syria.

I’ve been doing some personal writing of late on my dreadful experience in Lebanon that summer. In doing so, I’ve been revisiting some of these images for that purpose. In the spring I will have similar images in a documentary on Lebanese blues band The Wanton Bishops. Never know when people will want to hit up my vast archives from the post 9/11 decade. I always welcome it. 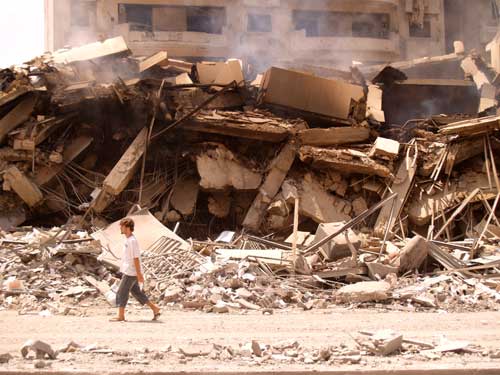 The scale of the destruction in and around Beirut in the summer of 2006 was nothing short of astounding. ©2006 Derek Henry Flood