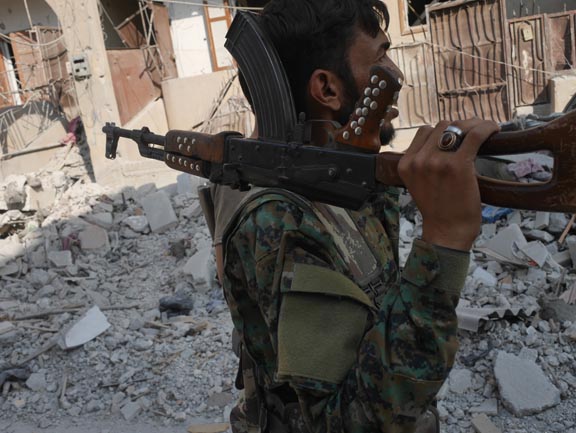 An SDF fighter from the Manbij Military Council scouts for IS in the ruins of ar-Raqqa in northern central Syria. ©2017 Derek Henry Flood

Ar-Raqqa- I have a new article out in the October edition of Jane’s Intelligence Review back in the UK based on my frontline observations and analysis in ar-Raqqa before IS would completely withdrew from the city exactly two weeks on. The destruction I witnessed was astounding in terms of sheer totality. I can’t recall seeing a single structure that was unscathed as the SDF and IS fought it out in those last weeks of waning salafi occupation. 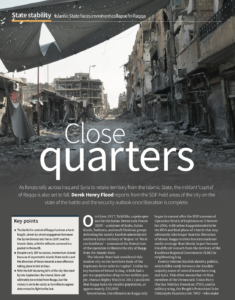 It was a ‘things will get worse before they get better’ scenario writ large as the entire breadth of the city was shattered while IS snipers fired pot shots from their veiled positions and American fighters circled overhead smashing them with GPS coordinates provided by the SDF ground spotters.

Driving around the city’s cratered intersections evoked a mid-1990s Grozny in terms of such a modest sized city withstood scorched earth. Ar-Raqqa was littered with corpses and almost wholly depopulated at the time of my visit. Unexploded ordinance and booby trapped dwellings made the zone uninhabitable for all but the men of the MMC and YPG in the SDF units I encountered.

When I interviewed a commander at the YPG media house about who would govern and secure ar-Raqqa after the battle concluded, his responses were vague at best. The conclusion of each battle in the transnationally inflected Syrian civil war meant that each end begat a new conflict erupting within weeks if not days in the battlespace.

← When in Kirkuk
Hawija Finally Collapses but for How Long? →