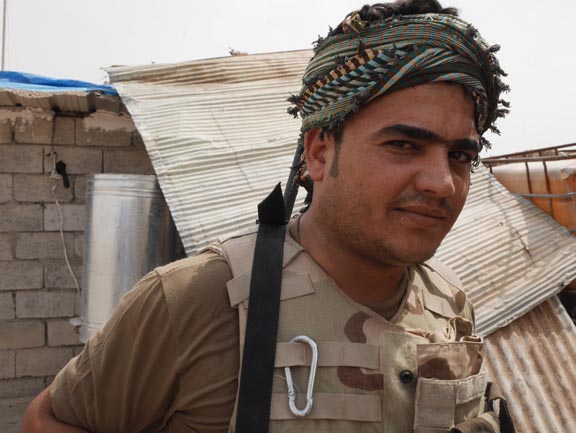 Frontline fighters were disciplined in waiting for their commander’s instructions while they occasionally took in IDP families and withstood IS salvos meant to harass their position in Dibis district. ©2017 Derek Henry Flood

Paros-I have a piece out this week for Jane’s Terrorism and Insurgency Centre on the findings from my field research in late August and early September in the troubled, multi-ethnic Kirkuk and Salah ad-Din governorates. These contentious regions act as a kind of security buffer between the mostly quiescent KRG that abuts northeastern Syria, Turkey and northwestern Iran and the schismatic Arab heartland of central Iraq.

But with the Kurdish desire to maintain control over Kirkuk after it was abandoned by state security forces, Baghdad wanting to reassert control over Kirkuk with Iranian-backing, and let’s not leave out the minority Turkmen who consider Kirkuk their cultural capital within the Iraqi milieu. Thus Kirkuk, and to a lesser degree Tuz Khurmatu, the seat of Salah ad-Din, will pull in all these players with oil-fueled centripetal force that will make its contested status an issue immediately after the IS territorial decline is certain.

While the focus is on eradicating the salafi-jihadis encircled by Kurdish, ISF, and Hashd al-Shaabi  units, once the Hawija pocket is subsumed back into state control, the likelihood of Kurdish and Shia fighters turning on one another is assured.

← The Festering Bastion
The Devastation →