Barcelona- I’m certainly no film critic, but I came away from the star studded Vice starring Welsh-born Christian Bale as Wyoming’s Richard ‘Dick’ Bruce Cheney, ruthless veteran Republican operator and titan of industry with several thoughts. Firstly as someone who lived through many of the events depicted in the latter portion of the film (9/11, the bombing of Afghanistan, the invasion of Iraq, etc), I know first-hand what the results of neoconservative (a no-longer-in-fashion term never employed in Vice for obvious reasons) policy were at home-collecting date on citizenry-and abroad-bombing and killing-and therefore felt compelled to see the film as it opened in wide release a month or so ago.

Vice elevates Cheney from a little understood yet enormously powerful bureaucrat to show him for the shadow master writer-director Adam McKay conceives him to be. It also portrays–without naming them as such–the alumni of the somewhat ominously named Project for a New American Century (then referred to be insiders and critics alike as PNAC for short) that sought to establish a democratic government, ostensibly one friendly or at least not hostile to Israel, in Iraq through large-scale militarised violence. How transparently dubious to things titled “Iraqi Liberation Act” and the ” Committee for the Liberation of Iraq” sound? These themes were spoofed in the 2005 film Syriana with its “Committee for the Liberation of Iran” that played upon many of the geopolitical fears prevalent at the time. 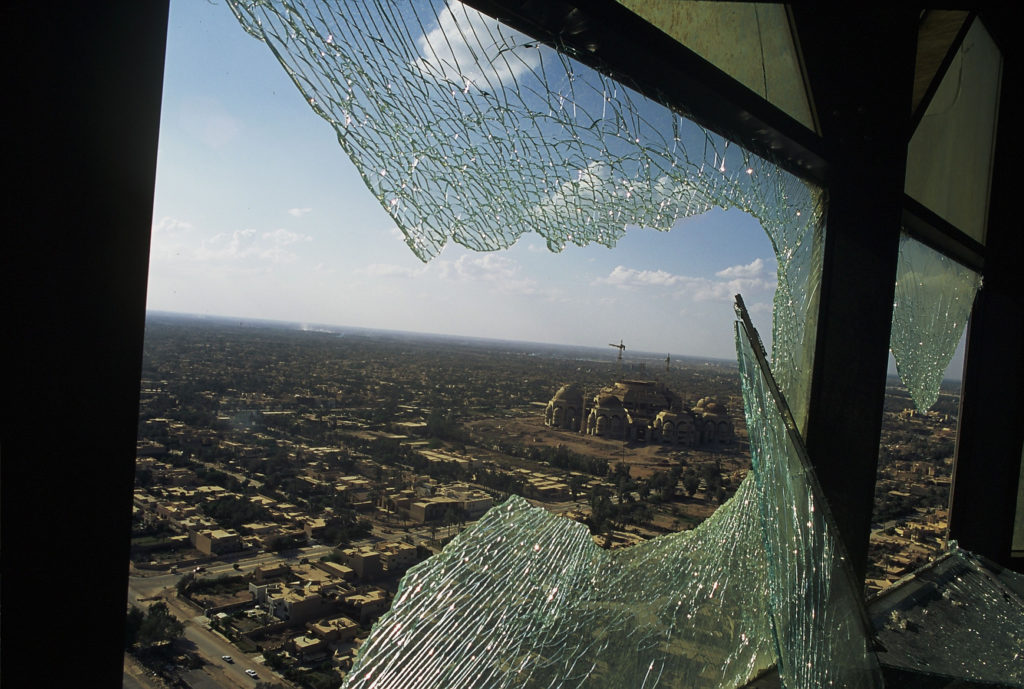 The world Dick Cheney left behind. View from the top of the Baghdad telecom tower with a view of a massive unfinished mosque. ©2003 Derek Henry Flood

The film made me a bit sentimental for that period of what seemed like comparatively binary politics on the world stage as compared to the ongoing chaos we see today where it isn’t quite clear who is in charge of global affairs. This was an awful, momentous period in world order and breaches to the U.S. Constitution-the bedrock of rule-of-law in the United States–but as an observer of events at home and abroad, one could at least feel they had a firm grasp of who the players were and what their dogmatic aims were meant to achieve, whether perceived as beneficent or nefarious depending on one’s perspective. Today, citing the presence of American Special Operators in the Autonomous Administration of North and East Syria (formerly known as the Democratic Federation of Northern Syria) as an example, no one seems to know what the hell is going on. When principal players like James Mattis and Brett McGurk resign overnight, the era portrayed in Vice seems relatively quiescent in terms of state stability in Washington. Not to make light of it, for the former begat the latter to be sure, but the present is certainly exponentially more embarrassing if not outright dangerous.

What really got me personally was that there was a John “torture memo” Yoo character-I suppose coincidentally played by actor Paul Yoo of no apparent relation. Yoo, a upwardly mobile South Korean immigrant, helped to legally articulate one of the darkest periods in the known conduct of state actors in the American federal system in recent memory. When I was in Thailand last year fruitlessly looking for the still secret locale of Detention Site Green, the site where ‘waterboarding’ was first thought to have occurred as an American torture method after 9/11 in the context of the Terror Wars. As in Vice where global warming became “climate change,” torture would be rebranded as “enhanced interrogation techniques.”

Years ago I was friends with someone who’s sister was married to Yoo. I was quite curious at the time what it was like to have a legal architect of the 9/12 world for an in-law. We didn’t delve terribly far into this awkward topic. By this point, Yoo was comfortably ensconced in northern California teaching law at UC Berkeley-a fact I found a bit confounding being that he seemed to be as antithetical to that particular campus or town’s ascribed ethos. At the time, said friend didn’t profess much of an opinion of Yoo other than he was polite at family gatherings. I wanted to know more being a few degrees of separation from such a controversial–to put it kindly–figure put pried not much further. Months before the film’s theatrical release, I remembered that vague connection when traipsing around Thailand to no avail.

The Rise of Al-Zarqawi

Interestingly what I didn’t not expect from McKay’s epic was how central the name Abu Musab al-Zarqawi (né Ahmed Fadhil al-Khalayleh) would be to the plot line. Al-Zarqawi was oft described is an unsophisticated Jordanian street operator from the working class northern city of az-Zarqa who was radicalised in prison by the infamous salafi preacher Abu Muhammad al-Maqidisi there and went on to bounce around the miniverse that was global salafi-jihad at the time. Where I disagree with the film’s narrative is that it, perhaps for the sake of brevity, describes Zarqawi as the founder of “ISIS.” Firstly, I can’t stand the term ISIS because it simply is not factually correct in terms of Arabic to English transliteration. ISIL is far more correct despite there being no agreed upon standardised translation.  Secondly, even if it were correct, the group no longer calls itself ISIL It has been just “IS” for years now. Adherents even shorten that to just ad-Dawla, meaning “the State” which implies omnipotence and universality in their violently myopic thought-world.

Thirdly, Zarqawi died in a strike in June 2006 some seven years before ISIS/ISIL was declared. Zarqawi founded Jamaat al-Tawhid w’al-Jihad (Group for Monotheism and Holy War roughly). The Islamic State of Iraq–the organisation that would later become ISIS/ISIL/IS was formed several months after Zarqawi’s assassination by constituents of the Mujihideen Shura Council who sought to cohere a dominant salafi war-fighting group in the cacophonous theatre that was the Sunni Arab insurgency in Iraq at the time. Perhaps I’m being a bit too technical but I bristled at that line in the otherwise quite enjoyable film.