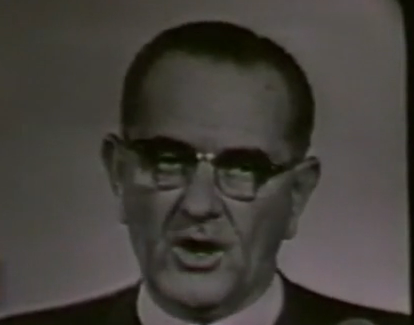 President Johnson speaking about the Gulf of Tonkin on August 4, 1964.

New York- I appeared on Saudi state television’s KSA 2 Friday to discuss the extension and, I suppose, expansion of the American war in Afghanistan (and to a lesser extent Pakistan) from the initially trumpeted July 2011 withdrawal to sometime at the end of 2014. I couldn’t help but reference the Gulf of Tonkin and President Lyndon Baines Johnson’s direct, televised deception to the American people in which he said damningly on on August 4th, 1964: “We still seek no wider war.” President Johnson had every intention of expanding American military and clandestine involvement in Indochina as a purported bulwark against a spreading communism and as an eventual boon to the military-industrial complex that the outgoing President Dwight David Eisenhower had warned the public to be skeptical of just three and a half years before, days before President John Fitzgerald Kennedy’s swearing in.

Of course, there has been no knowably false or trumped up incident to act as a catalyst for President Obama’s (and Secretary Gates’ and General David Petraeus’) opaque decision to hugely extend the Afghan war. We haven’t been told of one suicide bombing in Kabul too many or one IED too far in Helmand that justifies making the Afghanistan conflict the longest foreign war fighting engagement in America’s history. The three principal players in this game are congressional republican politicians in Washington, General Ashfaq Kayani’s Pakistani Army, and Afghan President Hamid Karzai’s corrupt government in Kabul. Within the nexus of these interlinked but often hostile political actors, the Afghan war has been undemocratically extended for the foreseeable future. President Obama does not want to “appear weak on defense” in his 2012 reelection bid, General Kayani’s troops have thus far refused to mount a large scale COIN/scorched earth assault on South/Central Asia’s most hardcore militant outfits holed up in North Waziristan, and an increasingly paranoid and isolated President Karzai needs the US and it’s NATO and non-NATO military allies to stay in the country in order for him to remain in power coincidentally until sometime in 2014. After I left the studio, what I had said for broadcast sunk in and I then had to stave off depression. If only Obama and his underlings had understood how critically important the terribly flawed Afghan presidential campaign was last year, and had that election had a different more genuine outcome, perhaps much of the assured bloodshed on the horizon could have been avoided. Wishful thinking on my part, maybe, but one thing is for certain: there is a lot of death and destruction to be, though it mustn’t be so. Americans today would more likely pour out into the streets over a rigged vote on a reality show that one in reality as the era of mass civil disobedience long ago gave way to rampant consumer culture and hollow worship of false mass market idols. In all of this miasma, it would do many good to realize that it is principally the Afghan people who continue to suffer. It is Afghan civilians who continue to take the brunt of military and militant violence in Afghanistan. Outside of that country, Afghanistan is for most an abstraction or a set of misapplied cliches vaguely having to do with empires and their various downfalls as if empires with their ill advising courtesans, not the Afghans themselves, are the victims. In history the Afghan people are mostly an afterthought as their country is described coldly as a “graveyard,” as an ill conceived “buffer state” or as “AfPak.”